Gerald McCoy Is Really Pumped to Play for Lovie Smith, and Quarterbacks Should Be Terrified 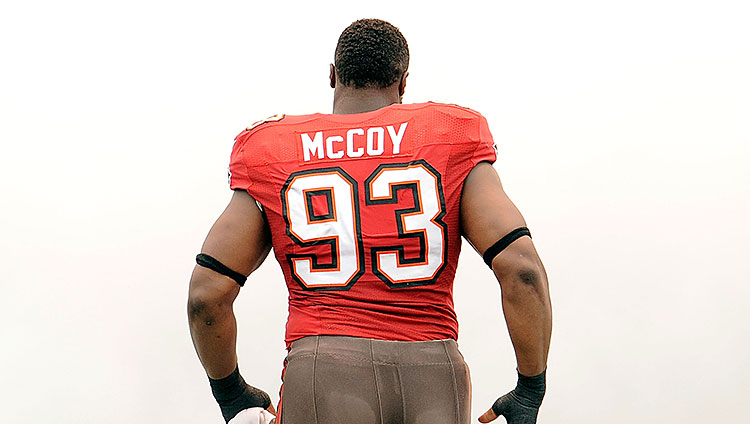 Gerald McCoy had every right to speak up. In the final few days of the seemingly endless stretch before this year’s NFL draft, his Bucs were being strongly linked with defensive line prospect Aaron Donald. The thinking was that Donald could take over McCoy’s spot as the 3-technique tackle in Lovie Smith’s new defense, with McCoy sliding over to play the nose. The day before the draft, McCoy had finally heard enough.

Hahaha all the speculation on draft is funny. I GUARANTEE this….. I WILL NOT. I repeat WILL NOT move to nose, regardless of who we draft!!

The only problem anyone should have with that tweet is that it could use a few more “ha”s at the beginning. With Geno Atkins on the shelf for most of last year, McCoy was the best 3-technique defensive tackle in football. Asking him to move to nose would be like making Kevin Love your sixth man because you drafted Adreian Payne.

The distinction between a nose tackle and a 3-technique tackle is about a foot and a half of grass, but those 18 inches make all the difference. Because nose tackles line up between the center and guard, with no defender in the next gap over, it’s all but guaranteed they’ll be double-teamed or at least chipped on every play.

McCoy’s spot on the outside shoulder of a guard gives him a chance to exploit one-on-one matchups as a pass-rusher, especially on passing downs — something he did better than any interior lineman in the league last year, with the exception of J.J. Watt (McCoy finished the year with “only” 9.5 sacks, but he’s a constant menace for quarterbacks).

It’s hard to say that the no. 3 overall pick in a draft has quietly surpassed expectations, but it’s true for McCoy. The 2010 class was all about Nebraska’s Ndamukong Suh, who just happened to play the same position McCoy, where he dominated while playing at Oklahoma. Suh’s incredible rookie season pushed McCoy even further into the shadows. But in the three seasons since, Suh has plateaued in Detroit (a plateau that still makes him the third-best defensive tackle in the league) while McCoy has kept getting better.

It was during last year’s 9.5-sack campaign that McCoy finally put some ground between him and Suh, and there’s a real argument to be made over whether McCoy or Earl Thomas deserves billing as the best player from a very good draft. But if I’m backing McCoy, I’m waiting until after this year to do it. We’ve seen Thomas in his ideal environment; I think McCoy is just finding his.

From the time Lovie Smith got to Chicago, one thing was clear about his defense: If there wasn’t pressure coming from the front four, the rest of it fell apart. Luckily for Smith, he had that from the start. In Smith’s first season, the Bears signed former Dolphin Adewale Ogunleye to a massive free-agent deal to lead their pass rush. They also spent their first-round pick on an Oklahoma defensive tackle named Tommie Harris. While never hitting the numbers he did in Miami, Ogunleye had a solid stretch of seasons in Chicago. It was Harris, though, who made the Bears’ defensive line go.

The best Bears defenses of the early Lovie Smith era were in 2005 and 2006 (first and second in DVOA, respectively), just as Harris hit his stride. He had only eight sacks combined in those two seasons, but just as the sack numbers didn’t tell the story for McCoy in 2013, they never did with Harris. He was sudden, strong, and more than anything, just a pain in the ass to block. The 2005 Bears won 11 games with, at the time, the worst season by a starting quarterback in NFL history.

It’s no coincidence that the Bears’ best defense post-Harris came in 2012. That’s when former running back turned defensive-line project Henry Melton had six sacks in just 14 games while spending most of his time in opposing backfields. The Bears again finished first in defensive DVOA, something they hadn’t done since 2005.

The reason penetrating defensive tackles have found success with Smith isn’t complicated: He allows them to. The Bears rarely did much blitzing under Smith, but when they did, it was often a double-A-gap look that, if anything, took blockers further away from players like Harris and Melton. Most of the time, Smith’s 3-techniques were free to operate with the space they covet, and their job with that space was to get up the field.

“I love it,” McCoy said earlier this offseason. “It’s just an up-the-field penetrating front, Cover 2 coverage, and it really just depends on the defensive line to take care of the pass game. They always tell us if you’re not rushing, you’re stealing. We’ve got to get to the quarterback and it makes it easier on everybody else.”

McCoy went on to say he thinks Tampa Bay’s defense has a chance to be “scary” with Smith in charge, a possibility that seems very real. Defensive end Michael Johnson, the Bucs’ no. 1 priority in free agency, is the type of pass-rusher the Bucs have been missing outside of Michael Bennett’s 2012 season, and newly added Clinton McDonald is a good penetrator in his own right. Add that to the perfect pairing of Smith and McCoy, and scary might just be the start.

This isn’t Smith’s first stint as a coach in Tampa Bay. His first NFL stop was with the Bucs as their linebackers coach in 1996. The year before, Tampa Bay had spent the 12th overall pick on a defensive tackle from Miami named Warren Sapp. Sapp went to the Pro Bowl seven times in Monte Kiffin’s defense, a defense that, outside of a few slight coverage tweaks, is the same one Smith still runs today. McCoy was already on his way to having the type of career Sapp enjoyed. Ending up with Smith might just be what ensures that he gets there.