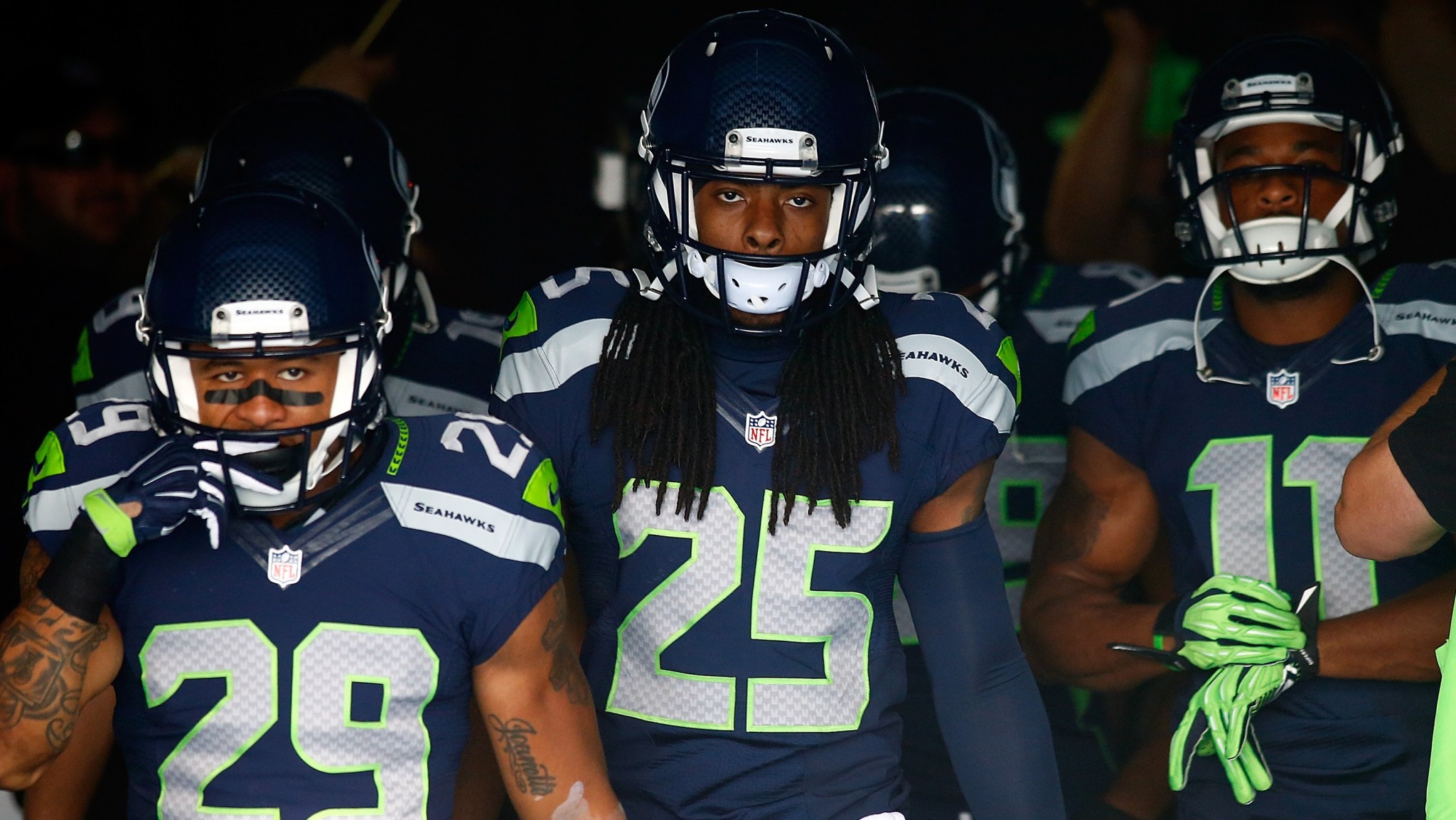 On October 19, 2014, the St. Louis Rams pulled out a miraculous home win over the defending Super Bowl champion Seattle Seahawks, using two memorable fakes on special teams to eke out a 28-26 victory. Seven days later, they started a three-game road trip by taking the four-hour drive west on Interstate 70 to contest the Battle of Missouri with the Chiefs. Perhaps drained by the emotional victory and the physical pounding of playing one of the league’s toughest teams, the Rams were blown out, 34-7.

At the same time, the Seahawks traveled to Carolina for a game against a Panthers team that had just been shown up in Green Bay. The Panthers delivered a brave performance at home and stood up to the imposing Seattle offense, but they weren’t able to muster much on offense and eventually fell to a late Luke Willson touchdown, 13-9. Four days later, Carolina hosted the Saints and couldn’t get up for the contest, losing 28-10 while the bruising Mark Ingram ran for 100 yards on 30 carries.

It's almost here. For everything you need to know about the new season, follow all of Grantland's coverage.
This became a trend. One game became two, two became three, and by the end of the regular season, the final 101 teams the Seahawks played during the regular season that had a game the following week all lost those “hangover week” games. Ten times in a row, a team played the Seahawks and struggled to answer the bell the following week. That doesn’t seem to be a fluke. And naturally, by the time December rolled around, people started to notice.

The biggest reason it caught on, of course, is that the idea is so plausible. If this were some weird thing where teams that played (not to pick on them, but) the Raiders subsequently lost the following week, we would treat it like a quirk of trivia without suggesting the Raiders were a cause. It’s totally logical that a team would line up against Richard Sherman, Earl Thomas, and Marshawn Lynch and come away bruised and battered. Seattle is unquestionably one of the most physically imposing teams in the league, so it seems natural that playing them would take a toll on opposing bodies.

And indeed, that’s come up in the recent past. The same thing happened with the Seahawks in 2013, when they started 6-1 and their black-and-blue opponents struggled afterward, going 0-6 in their games after playing Seattle. Then, former 49ers and Lions head coach Steve Mariucci pointed to Seattle’s “sheer physicality” as the explanation. If it happened in 2013, and it happened again last year, and the underlying logic passes the smell test, is there actually a hangover effect for teams that play the Seahawks? Is that in line with other great teams from the past? And will there be a, um, The Hangover Part III for Seattle’s opponents in 2015?

Let’s start with this Seahawks team. I just mentioned that Seattle’s opponents went 0-6 the week after they played the Seahawks in 2013, and before that, how Seattle’s final 10 opponents in 2014 that had following-week games went 0-10 in those games. You don’t need me to tell you that’s bad. Naturally, I started to wonder how those teams that Seattle played in between those two hot runs performed after they’d faced off against the Seahawks.

Those teams were slightly more successful. They went a combined 8-4-1 after playing the Seahawks, which doesn’t exactly seem to suggest that Seattle has some innate ability to impose its will on the opposition. (The records don’t add up to 32 games because we’re not including teams that followed games against Seattle with a bye or teams that played the Seahawks in Week 17.) It’s the first thing throwing cold water on this otherwise-reasonable idea.

Even with that improved run of play in the middle of those two campaigns, teams did struggle after playing Seattle. The 2013 Seahawks “yielded” a 5-9-1 record to their opponents the week after their games, which was the sixth-lowest winning percentage in the league. And the 2014 Seahawks improved on that to yield a 3-11 record to their opponents, which was tied for the stingiest mark in all of football.

Let’s take a look at those top-six teams from 2013 and see how their opponents did the following week:

That … sure looks like there’s no impact at all. The Seahawks were able to keep their ability to beat up the opposition from year to year, but the other teams that exhibited that ability in 2013 seemed to lose the hangover effect altogether. And while it makes sense that the physically dominating Seahawks and Eagles were able to impose their will on the opposition the subsequent week, it does seem weird that pass-happy teams with subpar defenses like the 2013 Bears and Chargers would also exhibit a hangover effect.

The other teams in the top five with Seattle last year also don’t exclusively seem like the bruising types. The Lions (whose opponents also went 3-11 in hangover weeks, for a .214 winning percentage) had a dominant run defense, but their pass-happy attack doesn’t seem like it would qualify for beatdowns. The Cowboys (3-9, .250) had the sort of physical running game that would seem like a natural fit for this argument, but their defense wasn’t anything like Seattle’s. The Giants (4-9, .308) don’t vaguely resemble the Seahawks. The Panthers (5-10, .333) are really the only team of the bunch that seems to fit the Seattle mold of a big running game and a tough, physical defense.

OK. Let’s take it back a step further. Maybe there’s something innate about the Seahawks that truly great teams have. That .214 winning percentage in the hangover week is pretty remarkable; since 1990, it’s tied for the 14th-stingiest winning percentage in this scenario over a single season. Let’s look at the 13 teams that were better at this than the Seahawks and see what they did the following year:

These teams were the most dominant of the last 25 years when it comes to breaking down the opposition for the following week’s game. And the year after, their opponents were basically a little worse than league average (6.9 wins per 16 games) when playing the same teams. If we include the 11 teams that are tied with the 2014 Seahawks at 3-11, that average jumps to a .466 winning percentage. We’re looking at what amounts to regression back toward the mean. In other words, this appears to mostly be a fluke.

Even looking at those teams in terms of their own performance and style seems to pull apart the idea that physically imposing teams like the Seahawks are the right ones to leave the opposition black-and-blue. Did anybody watch the 2012 Saints — who threw the ball 671 times and had the league’s second-worst defense by points allowed — and think that they were inflicting a meaningfully different amount of punishment on the opposition than other teams around the league? Were the Quincy Carter/Chad Hutchinson–era Cowboys of 2002 really beating down their opponents? And if there’s any individual team proving that this isn’t a meaningful skill, look out for those 2-14 Patriots from 1992 right in the middle of the chart. Teams must have been exhausted from marching the ball up and down the field on Dick MacPherson’s bunch, who finished with the worst record in football.

The correlation between a team’s winning percentage allowed in the hangover week from one season to the next is 0.01, indicating that there’s no predicative relationship whatsoever. One year’s performance has absolutely no value in suggesting anything about the following season, so while the Seahawks made the opposition pay in 2013, there was little reason to think it would occur again in 2014. Likewise, there’s little reason to think that Seattle’s opponents have to worry about how they’ll feel the week after they play the Seahawks in 2015.

And while the Seahawks do play a rough-and-tumble style, they’re not an especially big football team. It’s true that many of their stars are bigger than the typical players at their respective positions, notably in the secondary and at running back. At the same time, though, they’re smaller than you might expect at other positions. Their offensive line is built for zone-blocking, meaning that it has been smaller and quicker than other lines around the league. The Seahawks favor similarly quick talents on the defensive line and sacrifice size there in the process, as you might expect for a team that runs 274-pound Michael Bennett in at defensive tackle and bumps 245-pound Bruce Irvin onto the line at defensive end in pass-rushing situations. Oh, and while it hasn’t been talked about very frequently, their quarterback happens to be much smaller than the prototypical passers of the NFL.

In all, the Seahawks are actually one of the smaller teams in the league. I used Pro-Football-Reference.com to estimate each team’s effective size using games started and each player’s listed height and weight. By that metric, the Seahawks were 19th in the league in terms of height last year and 29th by weight. Only the Dolphins, Packers, and Washington were packing less on their typical frame. The Cardinals (third in height, second in weight) and Jets (fourth in height, first in weight) were the league’s two biggest teams, and their opponents went a combined 17-12 in their hangover weeks last season.

That doesn’t mean that there’s anything wrong with the Seahawks, of course. I’m sure players hate waking up Monday morning after playing Seattle, but the reality is, football’s awful tough the day after a game regardless of the opposition. The hangover effect is a fun idea, but there’s scant evidence suggesting that it actually exists.