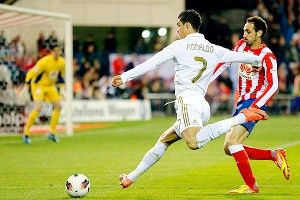 I have seen my fair share of “perfect hat tricks,” when a player scores with his right foot, left foot, and head. It’s a celebration of the various tools at the attacking footballer’s disposal. On Wednesday, I saw a “Ronaldo hat trick,” a free kick, long-range shot, and penalty. It was a celebration of him.

Real Madrid beat their in-town rivals Atletico Madrid on Wednesday 4-1, somewhat pumping the brakes on their downhill slide. Jose Mourinho’s team had drawn three of their last six La Liga matches, dropping points to Valencia, Villarreal, and Malaga, and allowing Barcelona back into the title race.

Real could not have been playing Atletico at a better time: The league leaders needed three points and they were playing a side that had not beaten them since 1999.

But in the end, though, Real Madrid did not need that statistic. They did not need history. They had Ronaldo.

Ronaldo had been through something of a dry streak this season when it came to free kicks. I haven’t seen all of them, but whether he is on target or off, I am willing to bet my unborn child that each attempt features the same set of gestures, tics, and actions: feet squared, head lowered, melodramatic exhale, gladiatorial focus in the eyes. Then boom. Forty times he skied it, shanked it, whiffed and whacked the ball off target, but the ritual was always the same. Obviously, it’s part of his regimen, but it’s also part of his brand: Heaven forbid there be a highlight clip that didn’t feature this patented run-up to brilliance.

But this time, he didn’t miss. At first, it just seemed like your run-of-the-mill 36-yard free-kick goal. It wasn’t like he made the ball travel at 64 mph or anything. It left his right foot, froze Atletico keeper Thibaut Courtois in place, went in the back of the net, and sucked the life out of Vicente Calderon Stadium.

Then you saw the faces: The utter humiliation on Courtois’s and the “This is what I do” expression on Ronaldo’s. Something had just happened; something special, something that was making the traveling Real fans hysterical. Then they showed the replay.

Were you to notate the trajectory of Ronaldo’s first goal like music, it would look like a jazz saxophone solo; a shot that arced up, showed its ass to Atleti’s keeper, and dove down like it had been shot out of the sky.

Ronaldo’s second, critically coming after Falcao had equalized for Atletico, was in some way more impressive than his first. It came in during open play, came at a sharper angle and pretty much acted as a behind-the-ear kill shot for the game. He sealed his “Ronaldo hat trick” with a penalty 15 minutes later, posing like a martyr while the Atletico fans flipped him the bird.

But his opener was the perfect “Ronaldo goal.” He is, after all, a soloist. Whether in Manchester United red or Real white, Ronaldo always seems alone. He seems to like it that way; lighting out on the wing, always looking exasperated, jonesing for the ball — not to work within some team concept but to exert his once-in-a-generation combination of skill, strength, and speed.

In free kicks, Ronaldo can finally, truly, be alone. Just like he wants. He gets to have his moment in the spotlight, his ritual, uninterrupted by hacking defenders or needy teammates. A soloist finally free of his band.

What's the Key to Beating Miami?