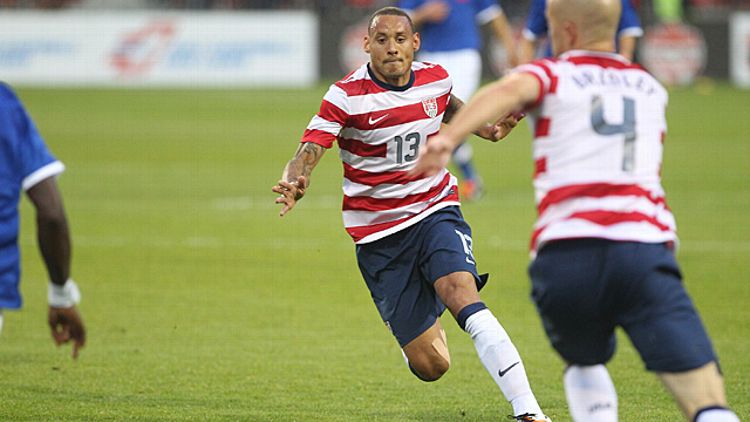 Before the United States men’s national team starts each formal practice, the players warm up in little groups. They juggle, getting touches, and chatting with each other. On one portion of the green pitch, you might see youngsters Juan Agudelo, Josh Gatt, Terrence Boyd, and Joe Gyau sharing a multicolored Nike ball. Fifteen yards away, German Americans Timothy Chandler, Fabian Johnson, Jermaine Jones, and Danny Williams pass and speak in their native tongue, while the Mexican American contingent — Herculez Gomez, Jose Torres, and Edgar Castillo — one-touch in a triangle. Elsewhere, Mix Diskerud, Jozy Altidore, and Maurice Edu chat about life in Europe. It’s a relaxed environment, one you would expect to see on soccer fields across the country and the rest of the world, a place where friends play with friends and young men with similar life experiences gravitate toward each other.

The question is how, if at all, the varied backgrounds, languages, and experiences affect the American team. Is there a danger that the cliques will present problems on the field? I asked Sporting Kansas City midfielder Graham Zusi, who parlayed a breakout performance during the 2012 January camp into a few World Cup qualifier starts and a leadership role during the ’13 traditional session. “In my experience, it’s been alright,” he says. “All the guys are from all different areas, but we are a group that gets together pretty well. I think it’s a very good thing to have a mix of youth and veteran leadership.”

To get an academic perspective I turned to Vanessa LoVerme Akhtar, a sports psychology doctoral candidate at Boston University who frequently works with soccer teams. “If they are exclusive, when they get on the field it hinders communication or decision-making. When they aren’t exclusive, it can be beneficial in multiple ways, depending on what’s driving the grouping,” she says.

Jay Coakley, Professor Emeritus of Sociology at the University of Colorado at Colorado Springs, agrees with LoVerme Akhtar. “As I’ve seen many times, if coaches do not identify these patterns and tactfully disrupt them on a regular basis, there is a higher potential that they will have a negative impact on playing patterns,” he says. “Teammates do not have to be friends to engage in effective teamwork, but they do need to accurately assess each other’s skills and on-the-field tendencies.”

The job of getting every member of the team involved with every other member of the team — to break up any potential divisions — falls to the coaching staff but also the players. U.S. manager Jurgen Klinsmann can only do so much, and he knows that the true bonding will take place away from his watchful eyes. In fact, it’s something he and his assistants made a priority during the January camp in Carson, California. To hear him tell it, the plan has been successful.

“What we really enjoyed over the last few weeks was the way they built their own chemistry. They understand how to play the game from a tactical standpoint, how to build relationships on the field, how to work together, and how to help each other defensively and offensively,” Klinsmann said during a Q&A with USSoccer.com, later adding, “It’s important that the more experienced players such as a Kyle Beckerman, a Brad Davis, and others are helping the younger ones when they come in. They make them understand what it takes to be a real professional and guide them. We gave them a lot of freedom in those three weeks, a lot of dinners were on their own and they could go out, which is a nice thing to do in L.A., and they were very disciplined with all those things.”

LoVerme Akhtar suggests that the veterans benefit, too, as they learn what type of leaders they are by organizing and mentoring the younger members of the squad. As older players lose a step, their ability to organize and encourage the greener guys around them may keep them on the field for another few months or years.

But even so, there is the potential that cliques will solidify and alter the way players interact on the field, either consciously or subconsciously. Coakley mentions one study demonstrating that straight and gay players on a field hockey team passed more often to teammates who shared their sexual orientation. It’s only one example, but there may be more. Few coaches have access to the type of analytic data that would show this, although that is starting to change.

And it’s not as though there never have been massive rifts on an American soccer team. The 1998 World Cup squad was divided, although that had more to do with a teammate sleeping with another teammate’s wife than a problem of groups not getting along. In all likelihood, the current American outfit benefits from the varied experience levels and backgrounds. “Some of the European guys bring a little bit different style, and so do the guys from Mexico,” Zusi says. “I think that mix right now is leading to some of our success.”

One thing is almost certain: The United States team will become increasingly diverse in the coming years, leading to the potential for small groups made from similar backgrounds to develop tight bonds and impact the play on the field. It’s an issue every future coach will have to address at some point.

He doesn’t answer his own question, but the subtext is clear: Small, homogeneous groups warming up together are one thing, but there will be trouble if it goes any further.

About Last Night: Spurs Get Burned