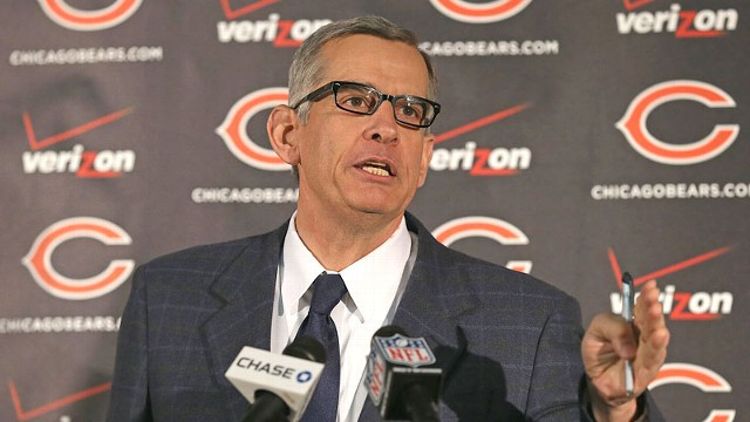 On October 16 of last year, the Chicago Bears released offensive tackle Chris Williams. The move meant that from Jerry Angelo’s tenure as the team’s general manager, which stretched from 2001 to 2011, only one first-round pick remained on the roster (his final one, Gabe Carimi; we’ll get to him). Angelo’s struggles were eventually what cost him his job, but nowhere were those struggles more pervasive than at offensive tackle.

In the 2002 draft, Angelo’s first at the helm, the Bears selected Boston College left tackle Marc Colombo with the 29th pick. Blake Brockermeyer, the team’s left tackle from its 13-3 2001 season, had been cut a few weeks before the draft to save the team a $500,000 roster bonus, and although James “Big Cat” Williams had gone to his first Pro Bowl in January, at age 33, it was his first.

Colombo’s time in Chicago was pretty much over before it started. He became a starter six games into the 2002 season before suffering a gruesome knee injury that also included significant damage to his femoral nerve. He missed the remainder of 2002, all of 2003, and most of 2004. That offseason, veteran John Tait was signed to a six-year contract to be the team’s left tackle, and one game into the 2005 season, Colombo was released.

Chris Williams was next in the line of Angelo disappointments. In a first round that included Jake Long, Ryan Clady, Branden Albert, Gosder Cherilus, Sam Baker, and Duane Brown (the league’s reigning best left tackle was actually the last of the group drafted, 26th overall), the Bears got the Vanderbilt product with the 14th overall pick. Again, injuries played a factor immediately. Some teams were concerned about Williams’s back problems at the time of the draft, and it only took until the second day of his first training camp for them to flare up. He spent the next two seasons bouncing around the offensive line but never claiming a spot.

There are some who might say calling Carimi — Angelo’s last-gasp effort to solidify the position — a disappointment is premature. I am not one of those people. Carimi missed the final 14 games of his rookie season with a knee injury, and although he started the first nine games of last season at right tackle, he was removed from the starting lineup following the team’s Week 11 disaster in San Francisco. Carimi slid over to right guard as injuries took their toll on the Bears’ offensive line near the end of the season, and although that short stretch and Carimi’s skill set would indicate he might have a future there, it still marks another failed attempt at solidifying the bookends of the team’s offensive line.

That about brings us to right now.

Angelo’s time in Chicago was nearly in step with Lovie Smith’s tenure as head coach. For seven years, the Bears had stability at every level of the organization, and both its personnel and schematic intentions were fairly clear. This offseason is the first in many where that couldn’t be less true. Second-year general manager Phil Emery is now joined by first-year head coach Marc Trestman, and decisions that would seem obvious under Angelo and Smith are now less certain. It would be hard to imagine Angelo letting Brian Urlacher walk as he becomes a free agent, but although Emery was a member of the team’s front office when the linebacker was drafted, his loyalty to Urlacher is more tenuous.

There are positions that need to be addressed all over the Bears’ defense — outside linebacker Nick Roach, defensive end Israel Idonije, and defensive tackle Henry Melton are free agents, as well, and the Bears have very limited cap space with which to make those decisions. Keeping Melton should be a priority, but Emery has been quiet on whether the 26-year-old will get the franchise tag.

On offense, the team still needs to address its lack of production in the middle of the field (which Emery acknowledged in his first postseason press conference), but where the problems begin is where they have for the past decade: This team needs an offensive tackle.

With J’Marcus Webb and Chris Williams set to fight it out to be the team’s starting left tackle, and with Carimi slated to start on the right side, Emery chose to stand pat in his first offseason. That’s no longer an option. After finishing in the bottom two in adjusted sack rate in 2010 and 2011, the Bears were 24th last season. Even if the team does think Webb improved over the course of 2012 (he did) and can be serviceable for right now (he probably can), that still doesn’t provide an answer on the right side. (A quick note on Webb: He was arrested last weekend and charged with marijuana possession in southern Illinois, but those charges have since been dropped; we’ll have to see how Emery and company move forward before speculating about how it will affect his status.) Jonathan Scott, who replaced Carimi after the demotion, is not the solution.

This offseason is a unique one in terms of how many quality tackles (Phil Loadholt, Jake Long, Gosder Cherilus, Andre Smith, Sebastian Vollmer, Ryan Clady, Jermon Bushrod) remain unsigned as we approach free agency. Signing one of them is a problem for two reasons: The first is that the Bears are about $8 million under the cap and have plenty of in-house contracts to figure out. The second is that I don’t see many of these actually hitting the market. Having a great tackle isn’t a priority until you don’t have one.

That leaves the draft, and the Bears’ 20th overall pick seems to be providing fewer options following the NFL combine. Oklahoma’s Lane Johnson, who was a quarterback and defensive end before moving to offensive tackle, was predictably impressive in workouts. Alabama’s D.J. Fluker is generally considered to be an ideal fit as a right tackle in the NFL. There were questions about whether he would choose to come out this year, but since he did, he seems to be impressing more scouts every day. At 6-foot-5 and 340, he’s both an excellent run blocker and very solid in pass protection. The Bears fan in me hopes that some rumblings about his ability to play left tackle in the league stay just that, and that he’ll be there come the 20th pick.

If there isn’t a fit in terms of talent and draft position when the Bears pick in the first round, I’m sure anyone interested in their success would prefer them drafting the best player available rather reaching for a lesser player. That being said, something needs to be done about that offensive line. Emery knows the path Angelo took, and I can guarantee it’s not one he wants for himself.