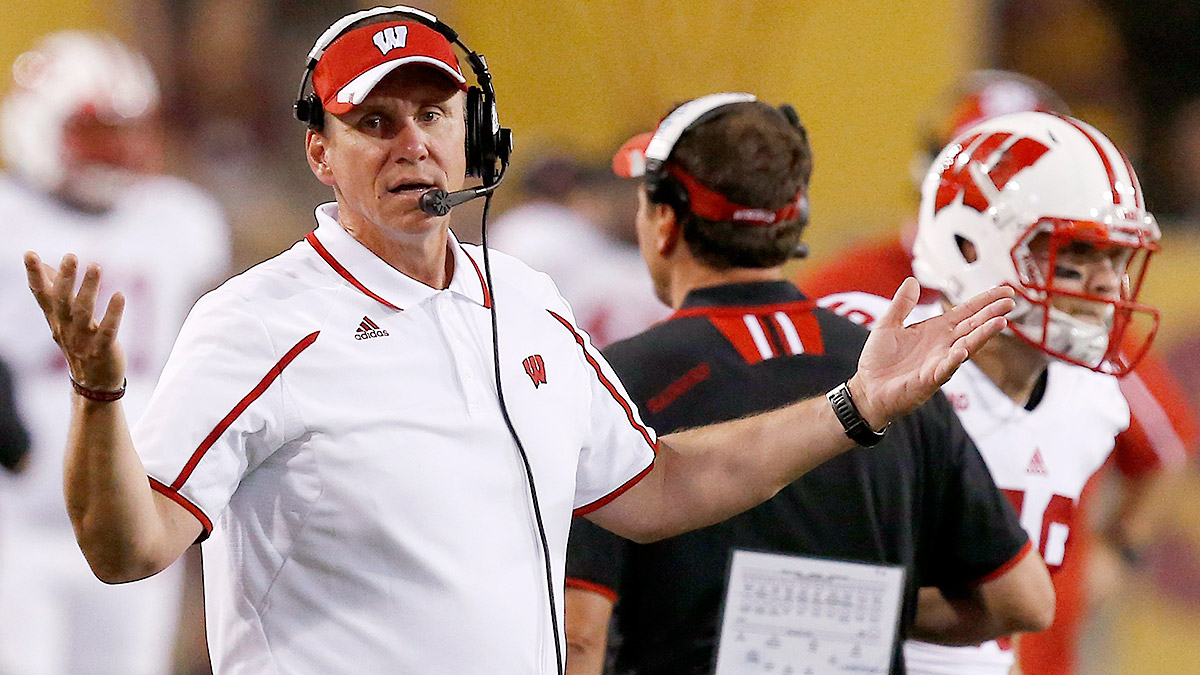 The 2014 college football coaching carousel has included the requisite weirdness, with fans and media tracking athletic directors’ flights, paparazzi taking pictures through living room windows, and a school canning a guy with a 67-27 record in favor of a dude with a 93-80 mark. You know, the usual stuff. But on Wednesday, we went from weird to genuinely baffling, with second-year Wisconsin coach Gary Andersen jumping ship for Oregon State (otherwise known as the school that used to employ the 93-80 guy). It’s football, not feelingsball, but we’re going to share some feelings anyway.

Holly Anderson: I’ve been trying, but I just can’t put myself in an imaginary emotional place where I’m so unhappy with my job in Madison that I’m willing to try to recruit football talent to Corvallis to get out of it. That’s a HARD task, though not an unfamiliar one for a guy who previously recruited to Logan, Utah. Adam Rittenberg’s been rolling out some plausible explanations for Andersen’s quick turnaround, but hoooooooly cow (Wisconsin joke): That’s two coaches in three years leaving a high-profile B1G team for lesser luminaries of rival conferences. Yeeeeowch.

Matt Hinton: As a Southerner, I sympathize with Andersen (and Bret Bielema before him) in the sense that human beings as a species were never meant to survive in Wisconsin, and there’s something inherently insane about the ones who have managed to do so. But from a football perspective … well, I have to think this move was not really made from a football perspective. As Holly said, however frustrated Andersen is over trying to get viable recruits through the admissions process in Madison, it’s going to be even harder to get them to Corvallis at all. Wisconsin has never been a recruiting power by any stretch, but at this point the Badgers expect to compete for Big Ten championships, at minimum, every year; Oregon State is considered such a noncompetitive backwater that its former head coach just parlayed a 29-33 record over the past five years into the Nebraska job.

Track the firings, hirings, and general madness during college football’s silly season.
Andersen is a great hire for Oregon State: He built Utah State into a solid program from scratch and has held the line Bielema set at Wisconsin. Mike Riley, on the other hand, is probably the lowest-ceiling hire Nebraska could have conceivably made. Riley’s a nice guy, and in contrast to the bombastic Bo Pelini, he’s great with the media. He was good for Oregon State. But for Nebraska, a program trying to break out of the frustrating rut it found itself in under Pelini, a 61-year-old whose teams have never lost fewer than four games in a season is about as far afield from the expected course as the Huskers could have strayed. Weird.

Anderson: I just got back from my first trip to Madison, and as a lifelong Tennessean/Californian/Georgian, I swear I could live there. It was 12 degrees the day I left. Increasing my body to 12 percent cheese curd by volume helped.

Mallory Rubin: Madison is the closest thing we have to Narnia. Why would anyone leave Narnia? Who cares about low assistant salaries and high admissions standards when the ice cream’s that good? Maybe Andersen just couldn’t stomach the idea of coaching a team featuring Joel Stave but not Melvin Gordon. But that explanation’s obvious and boring and actually pretty understandable. So who has a good conspiracy theory involving Jim Delany, Urban Meyer, and Bret Bielema’s wife?

Jen Bielema's hands are resting on the keyboard. She wants to. She NEEDS to.

Michael Weinreb: So, to summarize, the Big Ten West is composed of:

1. A coach (Tim Beckman) who believes his team was only 10 plays short of defeating Purdue.

3. A coach (Pat Fitzgerald) who referred to his own team as “an embarrassment.”

4. A coach (Darrell Hazell) whose team lost by three touchdowns to Central Michigan.

6. A program bereft of a coach for the second time in three years …

… and Minnesota. Which means a team that hasn’t qualified for the Rose Bowl since the Cuban Missile Crisis is now the most stable and promising program in this whole confab of misfit toys.

Anderson: I just got Oregon State’s press release announcement this minute. I’m guessing they were as surprised as we are?

Josh Wimmer: Madison is in the balmy 30s right now, but anyone who was here from January through, uh, May (seriously) for the Winter of Eternal Torment can sympathize with Andersen. And I say that as someone who spent the first 17 years of his life in goddamn North Dakota. Word on the street is that UW athletic director Barry Alvarez is currently in talks with Mance Rayder.

(Which is to say: Yes, this is Narnia. But our lion is still dead.)

Rubin: I can’t believe I wasn’t the first person to make a Game of Thrones joke :(

Andrew Sharp: Is this a safe space? Can I admit that the first time I learned Gary Andersen’s name was when I texted a friend from Wisconsin this past Saturday? I texted him, “WTF happened to Wisconsin” and all he said was, “Gary Andersen is secretly the weak link.” The only other time I’ve noticed Wisconsin’s coaching staff was when the Badgers inexplicably benched Gordon while they blew a 20-point lead to LSU on opening weekend.

So yeah, not sure if it’s time to freak out in Badger country. Bet you anything they’ll keep producing monster linemen and 2,000-yard running backs like nothing ever changed. “How is Wisconsin always good?” is as mysterious as “How is 12-degree Madison the best college town in America?” but I’m not here to argue either point.

As for Oregon State … that’s DEEP college football. Too deep for me. It would be like asking Holly to have an opinion on the Utah Jazz. Maybe Andersen can change that?

Anderson: No I don’t.

Matt Borcas: I think this move ends up working out for everyone involved: Andersen gets to live in his preferred time zone, far away from Wisconsin’s apparently rigid academic standards (who knew?); the Beavers get a head coach who’s way out of their league; and we, the viewers, get to watch Alvarez match wits with Gus Malzahn in the Outback Bowl. Most of all, Wisconsin gets to hire Rex Ryan, whose boisterous personality is exactly what the Big Ten needs right now. Enough with the milquetoast, low-upside coaching hires who only serve to strengthen the worst inferences about God’s chosen conference. Go big or go home, is what I always say.

Rubin: Only if Michigan gets Lane Kiffin first …

Borcas: Eh, this Rex prediction is based on nothing but intuition and wishful thinking. And I fully support Kiffin to Michigan.

Rubin: I smell another Photoshop …

Anderson: I’ve never seen Borcas and Kiffin in the same place at the same time. #teachthecontroversy

A Brief History of Utter Ineptitude: The Past 10 Years of the NBA’s Atlantic Division