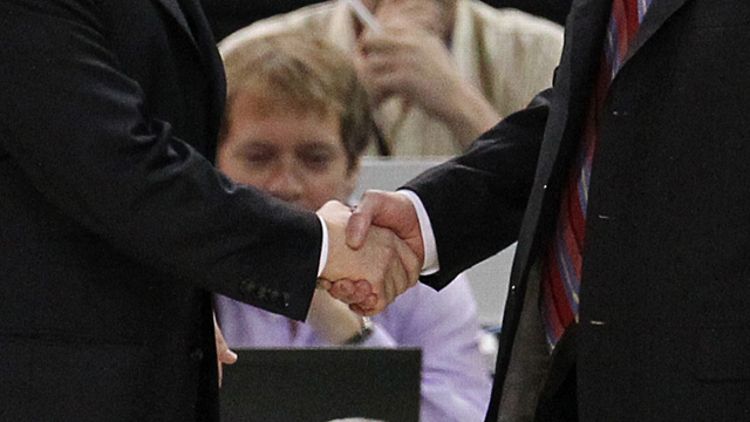 It’s been a very, very slow week in college basketball, so I thought I’d take a break from game analysis to investigate an overlooked and under-researched part of the sport: the postgame handshake between coaches. It’s been around as long as anyone can remember, but as far as I know, I’m the first sports scientist to ever study the phenomenon. Please remember that this is an exploration; you must approach the task with an open, inquisitive mind. It could be years before we have a truly definitive sociological understanding of the rules governing this ritual, but the time to start evaluating them is now. So what makes a good CoachShake? What can we do to educate coaches to improve future CoachShakes? Why do some CoachShakes fail? Those are questions I’d like to answer.

Here are five CoachShakes from this week:

Description: After an easy win, Johnson walks assertively to midcourt. He pats Potts on the shoulder, and Potts pats him on the side. It’s a rare Double-Potts Pat. Very few words are exchanged. It’s not quite a blow-by, but there’s no real conversation. We can infer that something like “good game” was uttered by both men. Neither coach registers any surprise at what he heard, meaning it was likely an innocuous exchange.

Crazy fan shot? Yes. A group of three Hokie fans mug for the camera. One wears a sailor hat, two wear orange wigs, and one of the orange-wig gang seems to be wearing some kind of basketball-themed cocktail dress with evening gloves, and a pendant.

Bonus: Johnson slaps five with students who made their way to the front row. He nearly trips at the end.

Description: Thompson appears to attempt the infamous “show of sincerity” that winning coaches seem to favor. The “show of sincerity” can run the gamut from condescending to actually sincere and complimentary, but it’s inevitably a hard moment to endure for the losing coach, who most likely just wants to leave the floor in a hurry. Some consider it a total power play by the winning coach, extending the moment of victory and forcing the other coach to languish in the humiliation of a loss. Gillian chooses not to endure it, opting for a polite blow-by with a slight head turn. Thompson is left to nod and continue down the line.

Bonus: Georgetown’s Mikael Hopkins, a sophomore, is the rare player who goes for the shoulder slap. Most choose to go with a simple handshake or slap, and the shoulder slap can be seen as presumptuous.

Description: There was a bracing sense of tension as the game ended because Evans opted to foul an Illinois player with two seconds remaining and his team down eight. Unfortunately, it didn’t lead to fireworks. Nodding as he approaches, Groce goes for the lean-in show of sincerity, whispering his sentiments directly into Evans’s ear. Evans adopts the typical blank face of the losing coach and accepts the compliment with stoicism, nodding and saying one or two words of acknowledgment before leaving.

Crazy Fan Shot? Yes. One fan wears a red sombrero and Star Trek shades, and he stands next to a friend wearing the same specs along with a Lincoln stovepipe hat. Behind them, a happy fan waves a towel and spins around wearing a spartan-helmet winter hat favored by the likes of “Jungle Bird,” the famous crasher.

Bonus: As he shakes hands, John Groce keeps his left hand at the ready, selectively deciding when to employ the double-grip shake or the shoulder-pat based on the status of the person in line. Plus, a cheerleader shot.

Description: In a Big Five matchup with a tight finish, the cameraman makes the unusual choice to focus on the approach of the losing coach, Martelli. He adjusts his tie and extends his hand, and we’re ready for the moment. Unfortunately, there’s a brief cutaway to the crowd that deprives us of seeing the entire CoachShake. When we come back, Martelli and Wright are patting each other on the back, the losing coach with the thousand-yard stare of the vanquished, and Wright wearing an expression of modest reserve. There will be no smiles until the locker room. We’re forced to guess at the actual interaction, but it seems as though it was quick and impersonal and that Wright probably opted against the show of sincerity.

Bonus: Wright goes for two hugs as he makes his way down the line, highlighting the geographical proximity of the schools. There’s a lot of familiar ground here, making the CoachShake a highly fraught event. Even a simple misstep can result in years of animosity, but Wright handles it like a pro.

Description: The camera chooses to show the George Washington players milling around their bench in disappointment, and by the time we see Mike Rice Jr., the CoachShake has already occurred. We’re left to speculate, which, of course, leaves us with an empty, hopeless feeling.

CoachShakes Score: 1.3/10. Historically, it takes a blackout or some other catastrophe to produce a CoachShakes score below 1.0, but this CoachShake, lost to history, comes close.

Thanks for reading, and join me next time when I investigate the ultimate CoachShakes powder keg: the road win.

Here's Why the Lakers Have Been So Terrible