Here’s Why the Lakers Have Been So Terrible 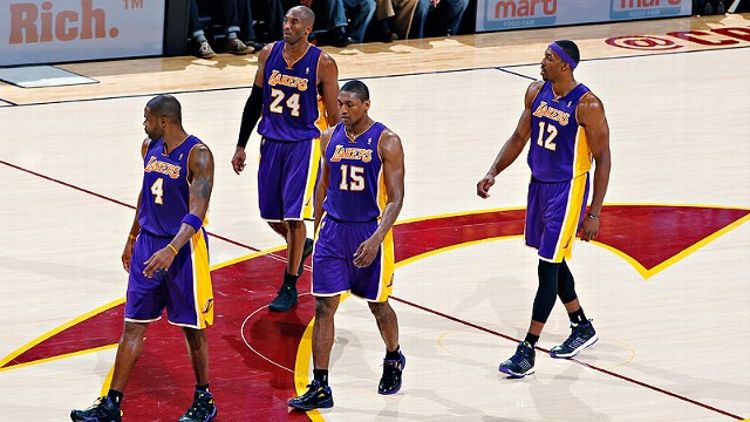 It’s a refrain we’re hearing now from Mike D’Antoni’s harshest critics: The Lakers are banged up, yes, but any team with Dwight Howard and Kobe Bryant should be better than 9-13. Even worse, they’re 4-8 since D’Antoni took over on the bench.

There are three things wrong with this:

• The Lakers aren’t just a little banged up. They are missing two Hall of Famers, and though one has an awkward fit in D’Antoni’s spread pick-and-roll offense — an offense that has only kind of been implemented to this point — replacing Steve Nash and Pau Gasol with Chris Duhon, Darius Morris, Antawn Jamison, and Jordan Hill is a massive downgrade. The Lakers after their first four players aren’t just bad; they are trotting out guys who are almost totally useless on either one or both ends of the floor.

• Howard is even further from peak form than most of us anticipated he would be one quarter of the way through the season.

• Bryant has been monstrously efficient on offense, but his defense has slipped horribly.

Those last two bullet points get at what is by far the largest issue facing the Lakers going forward: Their defense has fallen apart. As recently as a week ago, executives around the league were nearly unanimous in their assessment of the team: “They’ll be fine.” The Lakers were a top-10 team — and nearly a top-five team — in both points scored and allowed per possession, meaning the big picture suggested the Lakers had been somewhat unlucky, and would right themselves shortly.

They’re now down to 15th in points allowed per possession after another debacle last night in Cleveland — a game that featured a first half in which the Lakers were a borderline embarrassment of miscommunication, lurching and totally inattentive on transition defense. They have allowed 103.9 points per 100 possessions since D’Antoni took over, a mark that would rank 22nd overall. Almost every trend is going in an alarming direction.

Again, review the personnel: Jamison’s minutes have skyrocketed under D’Antoni, and he ranks as one of the worst defenders in the league. Hill would seem to represent a better answer, but the Lakers are playing significantly worse on both ends when Hill and Howard are on the floor together, per NBA.com. Metta World Peace is solid but aging, and the Lakers, in their years-long effort to preserve Bryant, have World Peace spending huge chunks of time guarding the best opposing perimeter player, regardless of position. Kyrie Irving enjoyed that:

Watch Howard’s help defense on this play. He takes a half-step off Anderson Varejao to contain Irving’s blow-by, and when Irving dumps the ball off, Howard responds with a hopeless lefty swipe at the ball. This has been the most visible effect of Howard’s back injury: He is working much more with his hands than his feet, and he cannot put together two or three hard cuts/jumps. Here’s a pick-and-roll on which Howard, again helping off of Varejao, takes a half-hearted jump-swipe at the ball and finds himself unable to mount a quick second effort:

This lack of mobility has Howard more tentative against pick-and-rolls this season than he was at his peak destructive ability in Orlando. He has so far preferred to hang back near the foul line instead of pressuring ball handlers up high, a strategy that the Lakers’ coaching staff has obviously condoned and/or encouraged. And when Howard has tried to step outside that comfort zone, non-entities like Jeremy Pargo have done things like this to him:

It is only a slight exaggeration to say that on some possessions, Howard looks more like Carlos Boozer than Dwight Howard. The net result is that teams are just eating up the Lakers inside, and you can see this in any number of troubling metrics. On a basic level, big guys on the pick-and-roll are shooting a lot, and those shots tend to be high-percentage looks; those bigs have finished 6.8 percent of opposing possessions, the 10th-highest mark in the league, per Synergy Sports. The Lakers were middle of the pack in that category last season. Teams are drawing fouls on nearly 15 percent of those possessions, the fourth-highest mark in the league.

The Lakers, in general, are suddenly fouling at a high rate — by their standards — and allowing .257 free throw attempts for every opposing field goal attempt, per NBA.com. That’s still the fifth-lowest mark in the league, but under D’Antoni, it has jumped to .287, which would rank about 20th. The Lakers have led the league in this category for three straight seasons, and foul avoidance has been perhaps the single most important factor in their maintaining a decent defense despite some of the same roster issues facing them now. If these are the early signs of a long-term shift, the Lakers are going to have a problem.

You know what else leads to easy buckets and desperate fouls? Crappy transition defense! A whopping 14.6 percent of opposing possessions have come via transition chances, the second-highest share in the league, according to Synergy. The Lakers are actually avoiding fouls in these situations; no team has committed shooting fouls on a smaller share of opposing transition chances than L.A. They are still allowing more points than average, per possession, on those chances, so the non-fouling only highlights two other things:

• They must be fouling a lot in half-court situations.

This is one area where Bryant has been irresponsible. Bryant didn’t belong on either of the last two All-Defensive teams (and perhaps one or two before that), but that owed more to ceding the tough regular-season assignments to World Peace than to any egregiously bad individual defense from Kobe. That has changed this season, which is why L.A. fans and neutrals are finally starting to call out Bryant’s defense. Howard was correct in pointing out that Bryant missed several basic rotations in New Orleans last week, and Bryant was similarly out of it last night in Cleveland.

Watch Kobe in the right corner stand like a statue as his man, Alonzo Gee, leaks out on this classic Duhon pratfall/turnover:

Yes, there’s a moment at which it appears Irving might lose control of the ball and turn it right back over to the Lakers, but Kobe is non-responsive even when Irving has it pretty securely.

Later in the game, both World Peace and Bryant just watched as both of their guys — Gee and C.J. Miles — ran out ahead of them after a World Peace missed jumper:

This is basically inexcusable non-effort. The Lakers visibly tried harder in the second half last night, but the breakdowns persisted, perhaps peaking on this bit of collective crunch-time failure:

Howard fails to angle himself to prevent the pocket pass from Irving to Varejao. Hill, who should be helping in the paint (and is at first), gets into a shoving stalemate with Tristan Thompson that takes him out of the play. (He may be trying to foul Thompson, a poor free throw shooter.) Bryant just stands, yapping, in the weakside corner instead of crashing down on Varejao. Every team doles out blame on plays like this differently, depending on systems and duties, but this is just a mess.

The Lakers’ offense is not nearly as big an issue, and it should improve upon Nash’s return; L.A. ranks a solid seventh in points per possession. But it’s still an issue in precisely the way a lot of us predicted at the start of the season, and again upon D’Antoni’s hiring: The Lakers cannot space the floor. Nobody pays attention to World Peace on the perimeter. But putting the ball in Nash’s hands will often take it out of Bryant’s, and defenses only kind of honor him as a long-range spot-up threat. And though Gasol is a solid mid-range shooter, he’s really a center who needs time and space to load up 18-foot jumpers. He is not a stretch 4 by nature, which is why Phil Jackson used Lamar Odom to break up the Gasol/Andrew Bynum duo as much as he could — especially at crunch time.

D’Antoni started the Hill/Howard pairing last night, but it just kills the Lakers’ spacing. They ran the same post-up set for Howard on several first-half possessions:

It begins with Hill outside the 3-point line on the left wing, as if anyone is going to care about him there. When Duhon enters the ball to Howard on the right block, Hill cuts down toward the baseline, so as to open up a perimeter spot for Duhon — someone who can at least kind of shoot from the outside. But Hill’s presence down low only places a help defender nearby, and that help defender can help with the confidence that the teammate behind him is ignoring World Peace in the corner to sag in on Hill.

Here’s another example of the same set:

Both of these possessions end positively for the Lakers, with a foul and a basket. But they also end with all five Cavaliers in the paint or a half-step out of it, and there will be games against very good teams in which the spacing is just too cramped for the Lakers to score enough. We also just haven’t seen Howard as a consistently dynamic pick-and-roll big, sucking defenses in with aggressive rolls to the rim and/or sealing off his guy for quick-hitting entry passes from a spot-up shooter on the same play. Howard had four more turnovers in this game, and the Lakers have the worst turnover rate in the league. They’ve been especially turnover-prone on post-ups; only the Hornets have coughed on a higher percentage of post-up plays, per Synergy.

And Howard is not the only culprit. Watch Bryant lose a chance to post up an outmatched Irving when all five Cleveland defenders converge on him in the paint:

It’s easy for the Cavs to collapse like this. Howard and Hill are standing right next to each other, and right next to the paint (or in it, in Howard’s case). Nobody is much concerned with the other two Lakers on the perimeter — World Peace and Duhon.

Again: The Lakers are talented enough to build a top-10 offense in spite of these spacing issues. Nash will help, but he won’t eliminate the problem, even though he’s probably the greatest shooter ever. Playing Jamison does loosen things, but he’s shooting 32 percent from deep and the defensive hit is huge. Finding the perfect combination of shooting and defense at power forward just might not be possible; the Lakers were counting on Howard to provide enough defense to make things work well enough.

But he’s not doing that, and things aren’t working well enough. They’ll work better when the team is healthy and has developed cohesion. But the goal is to win a title, and at 9-13, the Lakers have put themselves in a place in which they may have to win four straight road series — three in a loaded Western Conference, and then the Finals (wishful thinking now). The Lakers are so far from the level of play required to do that, it’s hard to see them getting there.

Is This Real? The Juggernaut Colts