Is This Real? The Juggernaut Colts 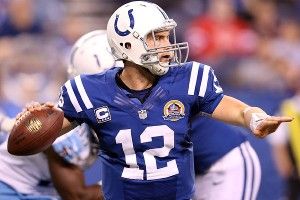 The Colts have become serious business. Their 7-1 stretch has propelled them all the way to 9-4, and they have a virtual stranglehold on a playoff spot: Football Outsiders estimates that the Colts’ chances of making the playoffs are at 92.9 percent. Heck, if they managed to sweep the Texans in their upcoming home-and-home series, they could actually control their own destiny and win the AFC South! Heady times for a team that went 2-14 last year; that’s for sure.

How impressive has Indianapolis’s transformation into a playoff contender really been? Is the swing unprecedented? Is it enough to justify the Coach of the Year award that Bruce Arians is likely to get this offseason? Should it push Andrew Luck to the front of the line for Rookie of the Year? Does he deserve MVP consideration? And are the Colts a team that opponents are really going to fear in this year’s playoffs?

To start, we all have to look past Indianapolis’s record and get a glimpse into their underlying level of performance. 9-4 is an impressive record, but the playoff boneyard is filled with the skeletons of 13-, 14-, and 15-win teams who lost to nine- or 10-win squads who either got hot (2007 Giants), played a tough schedule (2011 Giants), or had underlying levels of performance that were significantly better than their record indicated (2010 Packers). You don’t get to take your record with you to the postseason.

And once you get past Indianapolis’s record, well, the seams begin to show. The 9-4 Colts have been outscored by 37 points this year; their Pythagorean expectation from that point differential is that of a 5.6-win team. Put another way, there are 76 teams from 1990 through 2012 who have produced a point differential between -25 and -50 over their first 13 games, a group with which the Colts are smack dab in the middle. The average record for a team in that group is 5-8, and the Colts are the only team with such a point differential to have as many as nine wins.

As is almost always the case, a great record with a dismal point differential means that the Colts have been gangbusters in one-score games. Sure enough, the Colts are an incredible 8-1 in games decided by a touchdown or less. Only a handful of teams have won eight or more games by one score or less since 1990, and during the following season, they were a combined 49-45 in games decided by a touchdown or less. The fact that that there’s almost no year-to-year consistency in terms of record in one-score games implies, to some extent, that the same is true within a given season.

That incredible performance in close games has driven Indianapolis’s winning streak. During their current 7-1 stretch, six of Indy’s seven wins have been by one score or less. The one loss was a 35-point blowout to the Patriots. All it would take is an unlucky bounce here or there to turn a couple of those close Colts wins into losses, and when that’s the case, it’s tough to really take a team’s record seriously. As a worst-case scenario, take the 2011-12 Cardinals, who had a 13-game stretch where they went 11-2, highlighted by a 10-1 record in games decided by a touchdown or less. Had those wins come in the course of a single season as opposed to being split over two seasons, we would be fitting Ken Whisenhunt for his Hall of Fame bust right about now. Instead of maintaining their performance, though, the Cardinals have followed that stretch of close wins by going on a nine-game losing streak, one that’s seen them go 0-4 in one-touchdown games. It can fall apart that fast.

It’s not just that the Colts have been winning by slim margins; it’s that they’ve been beating bad football teams by those slim margins. Look over the vanquished foes on that 7-1 stretch. It’s a list that includes the Bills, Browns, Dolphins, Jaguars, Lions, and a pair of victories over the Titans. Indy’s beating up on the league’s poor, huddled masses! Those teams are a combined 24-46 in games that don’t involve the Colts. They’re awful. Indy’s played four games against teams who are over .500, and in those games, they’re 2-2 with the wins (over Green Bay and Minnesota) coming by a combined six points. They were outscored in the losses by 55 points. In all, pro-football-reference.com calculates that Indy’s played the league’s easiest schedule this year.

Those facts fundamentally change what we think we know about the Colts. Without the luck in close games, the Colts and Luck are something akin to the 2011 Panthers, a team with a promising rookie quarterback that was more competitive than people realized without threatening for a playoff spot. That team was outscored by 23 points all year, but they only went 6-10 because Carolina was 1-5 in one-score games. if you flip that to a 5-1 record, the Panthers are 10-6 and they’re in the mix for a wild-card berth in the NFC.

That also has to change the way we view Arians and Luck. Arians does genuinely deserve massive credit for producing a competitive team in the absence of leukemia-stricken head coach Chuck Pagano, but this is a record built on close wins over the league’s worst teams. If you’d still vote for Arians as Coach of the Year if the Colts were 6-7, he absolutely deserves your vote. Luck, too, has numbers that have been inflated by a very generous set of pass defenses. If the Colts were hovering around .500, we’d be talking about the fact that Luck leads the league in interceptions as part of the explanation as to why he’s finishing behind Robert Griffin III for Rookie of the Year.

If Colts fans want to hang on to some semblance of hope that their team can carve out a playoff run from the fifth seed, consider that there is a team with a similarly poor scoring differential through 13 games who improved: last year’s Giants, who were at -25 points through 13 games before finishing 2-1 with a stretch that knocked them down to -9. On the other hand, teams with this profile have only really been able to do well at home. The 2011 Broncos had a similar differential and were able to overcome the Steelers at home before getting blown out by the Patriots in the AFC divisional round. The 2010 Seahawks were an even worse team, but they got a home playoff game against the Saints and managed to pull out an upset win. Once they had to travel to Chicago, they got blown out in a 35-24 game that was far less close than the final score. Unless the Colts can somehow sweep the Texans and win the AFC South, their playoff run will start on the road with a game against the Broncos or Ravens.

Don’t get me wrong. The Colts aren’t a terrible football team. Football Outsiders has them as the league’s fifth-worst team after adjusting for a number of things, including that strength of schedule. I think they’re better than 28th. But they’re not an above-average football team, either. And in the playoffs, I think they’re going to be quickly shown the door by a genuinely superior team.

'Inexplicably, Gervinho Got His Feet All Wrong'

Here's Why the Lakers Have Been So Terrible