It Just Keeps Getting Harder to Believe in Believeland 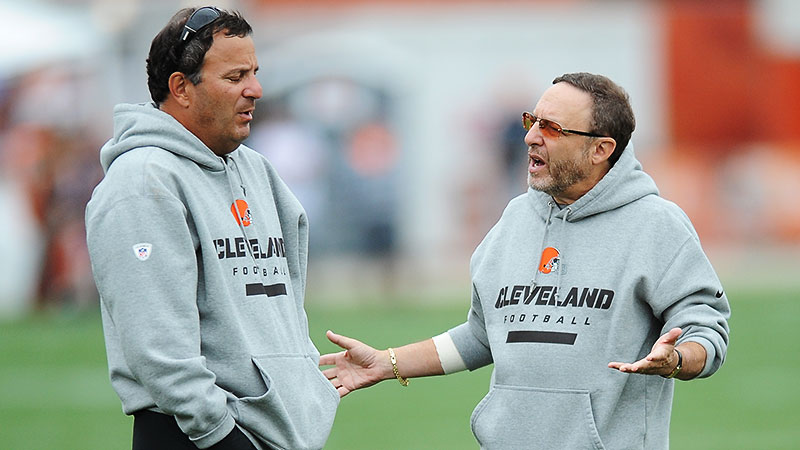 On Tuesday morning, the Cleveland Browns announced that CEO Joe Banner would “step down” after May’s NFL draft, while general manager Michael Lombardi would “depart the organization” effective immediately. This came on the heels of one of the most roundly mocked coaching searches in NFL history, which concluded when the Browns hired Mike Pettine, a decent coach by all accounts, and also a coach the Browns didn’t even think to interview until late in the search’s second week. Owner Jimmy Haslam, whose press conferences have doubled as grade-A performance art during his short time in Cleveland, described the team’s previous front office setup as “a little bit cumbersome,” and stressed the idea that Tuesday’s moves were all about “streamlining” things, whatever that means. Rough translation: EVERYONE REPORTS TO JIMMY NOW, at least until the feds get involved.

While the Banner-Lombardi reign in Cleveland was brief, it certainly wasn’t unmemorable. The pros pretty much boiled down to acquiring a first-round pick for Trent Richardson, which in retrospect looks like a case of grand larceny, and signing journeyman quarterback Brian Hoyer, who was a brief bright spot during an otherwise dark 2013 campaign. The list of cons is quite a bit longer. First-round edge-rusher Barkevious Mingo had a fairly disappointing rookie campaign, as did most of the Browns’ latest draft picks; $34 million free-agent acquisition Desmond Bryant’s season ended prematurely because of an irregular heartbeat, which was a known issue dating back to 2012; all-world wideout Josh Gordon was nearly dealt in October; and the Davone Bess trade proved to be an unmitigated disaster, with Bess leaving the Browns in mid-December and subsequently broadcasting his marijuana usage on Twitter. Of course, Rob Chudzinski’s untimely ouster was the biggest strike against the Banner/Lombardi tandem, and their failure to deliver Haslam a top coaching replacement is reportedly what ultimately led to their demise.

What happened. We hear Lombardi kept pushing for McDaniels to be HC, creating rift with Banner. Haslam lost appetite for rifts.

The Banner/Lombardi regime was also always something of a public relations nightmare for Haslam. Because of Lombardi’s checkered history in Cleveland, Browns fans didn’t exactly welcome his second stint with open arms. Banner, meanwhile, was largely considered a meddlesome executive with a disturbing penchant for burning bridges. Exacerbating this perception was how Banner insistently shielded Lombardi from the Cleveland media, as if Lombardi couldn’t defend his own decisions. Banner chalked this up to Lombardi’s “lightning rod” status, failing to recognize that by keeping his GM out of the public eye, he was only making the lightning rod brighter. Once reports surfaced that the Browns’ head coaching job was considered “radioactive” around the league, Haslam probably felt he had to make a change.

#Browns source told said org had a meeting in morn. Haslam walked in, announced Banner & Lombardi were gone & walked back out. Dead silence

So now the Browns are left with team president Alec Scheiner running business operations and former personnel assistant Ray Farmer serving as GM. Farmer interviewed for the Dolphins’ GM vacancy last month, but quickly removed his name from consideration, leading folks to believe that Haslam informed Farmer of Lombardi’s imminent departure weeks ago. (Farmer denied this in his introductory press conference.) For what it’s worth, Farmer is reportedly “among the most respected young football men in the league,” and when Chuck Klosterman visited the Browns’ draft room last April, he noted that Farmer “rarely speaks first but provides the most balanced insights.” And while Farmer undoubtedly faces an uphill battle, he also has plenty of ammo with which to fight: The Browns own 10 picks in May’s draft and boast considerable cap space to use during free agency.

For this very reason, though, we’ll never be able to grade the Banner/Lombardi regime as anything other than incomplete. From the get-go, it was clear that their plan was to stockpile assets for the 2014 offseason, and now they won’t be able to see that through. That’s not to say they deserved the chance: Their numerous failings raised legitimate questions about their ability to effectively improve the Browns, and Haslam clearly felt they couldn’t.

Still, while Haslam might have made the right choice by cutting his losses and starting anew, pulling the plug on everything in mid-February will only strengthen his reputation as an impetuous, reckless micromanager who will stop at nothing to become the next Jerry Jones or Dan Snyder. Moreover, it highlights the absurdity of his promise to bring stability to the Browns — a promise already made laughable simply by comparing Cleveland with its unchanging AFC North counterparts. All told, the Browns have employed three head coaches and three GMs under Haslam. Here’s hoping Pettine’s and Farmer’s contracts include lucrative severance packages.

About Last Night: How the West Was Won