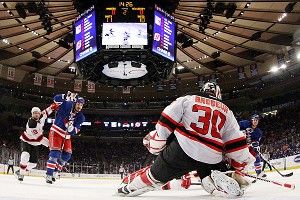 As I watched the Rangers pull away from the Devils on Monday, I realized that in a few days, we might be in for a New York–Los Angeles championship series. The Kings, who face the Coyotes in Game 2 of the Western Conference finals tonight, are an 8-seed, but they have a 1-0 lead on Phoenix in the series and are 9-1 in the NHL playoffs. Right now, it seems there’s a solid chance that America’s two most populous cities will square off for the Stanley Cup.

The possibility got me thinking about previous New York–L.A. clashes. It turns out that in 336 combined years of American championships (big four sports only), the two biggest cities in the country have met just seven times. That was it. New York is 4-3. Hooray!

That limited history set my mind to wandering, and after an hour spent looking at lists of NHL, NBA, MLB, and NFL champions, along with some furious notepad scribbling, I discovered the greatest sports trivia question of all time. It has to do with cities and championships, but after the time put into the research and the ensuing thrill of discovery, I’m going to be totally heartless and make you read a bit more.

First, a fantastic trivia question that will live forever in the shadow of the one that comes later:

Which cities have met in the most championships, in a single sport?

There are two answers to this question. The first is obvious, and will lure in almost everyone you ask: Boston vs. Los Angeles. Boston and L.A. have faced off in the NBA Finals 11 times, with Boston winning eight. The cities have never met in the NHL, NFL, or MLB finals.

The tricky answer: New York and New York. Sure, it isn’t two distinct cities, but bear with me. Teams from the city of New York (I’m including Brooklyn here) have met in the World Series 14 times, but never in any other final. If you’re keeping track at home, the Yankees are 4-2 against the New York Giants, 6-1 against the Brooklyn Dodgers, and 1-0 against the New York Mets.

Now let’s look at city rivalries in earnest. (For simplicity, I focused my football research on Super Bowls only.) Obviously, certain limitations prevent a lot of matchups. Such as:

1. Regional Conferences
The NBA in particular has always had a West versus East championship format, meaning Boston and New York, or Boston and Philadelphia, or Chicago and New York could never meet in the Finals.

2. Leagues
The Red Sox and the Yankees have a rich history, but have never met in a World Series. Ditto for the Cowboys and Steelers Redskins, Celtics and 76ers, and on and on.

3. Westward Expansion
Teams sprouted up later on the West Coast and missed years of history; in the case of baseball and hockey — and aside from Boston-L.A. — most historical rivalries involve mostly clubs on the East Coast and in the Midwest.

With that in mind, it’s evident that the quantity of championship meetings between two cities is an incomplete measure of the rivalry. But it is fun. Here what I found out:

Which leads us to the greatest sports trivia question of all time. No more beating around the bush.

Which are the only two cities to have met in the championship of all four major American sports?

Boston and Philadelphia came close. Tantalizingly, agonizingly close, but without a payoff. Then Boston and New York doubled the pain, with no meetings in the NBA Finals.

How about Philadelphia and Chicago? The Philadelphia Athletics beat the Cubs in 1910 and 1929. Baseball down. The Blackhawks (one word now) beat the Flyers in 2010 for the Stanley Cup. Hockey done. The Bears and Eagles have never met in a Super Bowl, but the Eagles and the Chicago Cardinals split a pair of NFL championships in ’47 and ’48. From 1947 to 1949, the Basketball Association of America (BAA) was just the NBA by a different name, and in ’47 the Philadelphia Warriors beat the Chicago Stags four games to one. Put a check next to basketball, and that’s a clean sweep.

But did it count? It didn’t feel satisfying, I’ll tell you that much. I wanted the real thing, with Super Bowls and NBA championships. But one possibility after another closed off, foiling me. Just when I was ready to give up hope, I saw a strange little oddity that set off sparks in my brain and parted the clouds of frustration. The veils lifted, my friends, and now I present you with this.

Take a breath if you need it. Call your folks. Eat a snack. The answer is below this YouTube video of the Tragically Hip singing about Bill Barilko and the Maple Leafs in one of the great sports songs ever.

Cardinals defeat the Red Sox in seven games in 1946! Celtics take down the St. Louis Hawks in seven in ’57! Hawks get revenge the next year in six! Celtics strike back with a vengeance in ’60 and ’61, and the Hawks are so devastated they move to Atlanta a few years later! The Cardinals break Red Sox hearts again in ’67, winning in seven! That pisses off the Bruins, who get in on the action with a clean sweep of the St. Louis Blues in ’70! Things die down a little, but then Bill Belichick decides that football will be a lot easier if he knows the other team’s plays, so he videotapes the Rams on the sly and then beats them in the 2002 Super Bowl! And just when you thought things were about to settle, the Red Sox end a World Series drought extending back to 1918 with a sweep of the Cardinals in 2004!

That’s nine championships, good for third all-time, and the only clean sweep among the richest rivalries in sports.