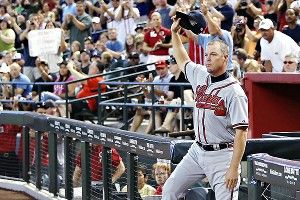 Chipper Jones sits at his locker, shoulders slumped, deep creases under his eyes, looking up wistfully. He’s wearing a Braves T-shirt, compression shorts, knee socks, and slip-ons. At that moment, he doesn’t look like one of the greatest hitters who ever lived. In a state of half-dress, still in good shape but with a weathered face that betrays his age, he looks like the best player on a 35-and-older fast-pitch softball team.

“You hate to cheat the fans from being able to watch a guy like that pitch, especially in his final years,” he says, discussing the knee injury Mariano Rivera just suffered. “Nobody wants everybody’s last image of you to be getting carted off or carried off the field.”

He’s talking about baseball mortality. Rivera’s, sure. But mostly his own. Chipper turned 40 on April 24 and his own knees are failing him, and it’s eating him up inside. Two years ago, Chipper blew out his left ACL. Now, his knees punish him. They prompted surgery in spring training. Made him miss the first four games of the season. They blow up on plane rides. After two or three games in a row, they give him agony, to the point where some mornings he can barely walk.

This is the burden he bears as the first-place Braves battle to win their first NL East crown in seven years — after winning 14 of 15, with Chipper playing a significant role in 11 of them. The Braves have gotten good power out of Chipper’s third-base caddy, Juan Francisco. Several other hitters have also stepped up, propelling Atlanta to the second-highest-scoring offense in the National League. Still, he wants to be out there. Longs to be out there.

Chipper shoves his cup on. He’s talking about Albert Pujols’s season-long slump, and the worst slump he ever had.

“I might have gone 0-for-25 or something like that. It’s a big monkey. And it happens to everybody. At some point in everybody’s career they’re going to struggle. Albert’s made this game look easy for a very long time. But eventually, no matter how you good you are, you’re going to have one of these stretches. He’s experiencing what us mere mortals have experienced for years.”

Funny thing for a player of his stature to say. But Chipper can be at once confident and self-deprecating. He describes what his presence in the lineup means for the confidence of his teammates. In the next breath, he laughs at the notion of being in Pujols’s company.

Certainly not now, not when his health is an everyday concern. For himself, for his teammates, for his manager. He knows it, talks freely about it. So does Fredi Gonzalez. “I kind of made a joke out of it the other day,” says the Braves skipper. “I get up in the mornin’, kiss my wife, get a cup of coffee … and call Chipper on the way in.”

Chipper stands up, pulls on his uniform pants. When is it time for a player to quit? he’s asked.

It’s a thorny question, one that might piss off other players, even end an interview. Chipper doesn’t dodge the question. He’s thought about it a lot lately.

“It’s hard for me to be honest. You’re talking about a guy who for 10, 11, 12 years played 155, 160 games a year. It’s not really in my DNA to go out there and play 80 or 100 games. But my dad always told me, he said, ‘One day you’ll wake up and you just won’t want to do it anymore.’ I had an instance like that right before I blew out my knee [in August 2010]. Bobby [Cox] gave me a couple of days to sit and think about it. Obviously I didn’t want to walk out on the club at that particular time of the season, that would have been wrong. But between that episode and when I blew out my knee I got hot. So I enjoyed coming out to the park again. We were winning, playing well. And much like Mo, I don’t want everyone’s last vision of me to be limping off the field behind third base in Houston. So I used spring training as a motivational tool to get myself ready. And from that point until now, the one thing that’s kept me coming to the park every day and being enthusiastic about it is my teammates. We’ve got a great group of guys here, a great group of young guys that are energetic and they’re good players. I think this organization is headed back up, from third, fourth, fifth place to where we were before. I’d be lying if I said I didn’t want to be a part of it.”

Chipper sits back down, ties his shoes. A few lockers over, one of those young, energetic teammates is getting ready to take the field. When Jason Heyward first came up two years ago, you’d hear stories of Chipper taking the rookie under his wing, conveying advice to a supernaturally talented player who wouldn’t be able to legally drink for four more months.

Heyward says those stories are true. “It’s a luxury and a privilege to be able to pick his brain. It’s kind of a big-brother role: ‘Anything you need, I got it. If not, cool. How do you feel today?’ It’s not just hitting and fielding and throwing. It’s the mental aspect. It’s everything.”

These are traits that would prove invaluable for a manager, but Chipper has no such plans after his playing career’s done. Still, former teammate and current Braves first-base coach Terry Pendleton sees a future coach, at least.

“He can look at swings of other players and show you insight on what they’re doing right and wrong,” explains Pendleton. “He looks at pitchers and tells you what they’re doing, what they’re going to do. He has a knack for knowing when things should happen, when they might happen, and why they might happen. He’ll let a guy do his thing, do his thing, then finally say, ‘Hey, you know if you tried this, this might work better for you than what you’re doing.’ Me, as a hitting coach, I would sometimes just sit back and listen to him do that. Because as a coach you can tell a player something 20 times, nothing. He says it once, and the player will say, ‘hmmm!'”

Chipper pulls on his jersey. As much as sitting out games hurt, his pride takes a bigger hit when he fails in situations where he might have once succeeded. Once a good baserunner and a 15-25 steals guy, he now looks slow in his trademark weird gait, running with his shoulders slightly twisted, one edging ahead of the other. When he struggles at bat he gets even madder.

“I refuse to believe I can’t catch up to a heater,” he says. “It’s just the mind-set of a guy who’s hit in the middle of the lineup for 18, 19 years. You gotta hit the fastball to hit in the lineup, and make adjustments on other pitches. But there are times when fundamentally you’re not there and the fastball’s getting by you where you just say, ‘OK, I’ve just got to fight off the fastball and whenever he throws me an off-speed pitch for a strike, don’t miss it.'” That happens a lot more now than it did a decade ago, he admits.

Chipper fiddles with his buttons. He tells stories about setting up pitchers, about the time he was facing vintage Pedro Martinez when Pedro was with Montreal, took a terrible swing on a changeup early in the game to give him more confidence in his change (as if he needed it), then sat dead changeup on a 3-2 count later on, got one, and launched a grand slam.

The conversation turns to this year’s actual results. He can sandbag all he likes, but Chipper’s hitting .311/.358/.554, leading the team in slugging and Weighted On Base Average and ranking near the top in several power categories.

He’s still making memories, too. He grins, recalls last week’s 15-13 barn burner against the Phillies, and what Gonzalez said to him before he came up to bat in the bottom of the 11th. “Hudson has to hit fourth this inning. So fuckin’ do something.” And he did, launching a walk-off two-run jack to cap “the craziest game I ever played in.”

Later that weekend, he’ll get nearly as fired up after Rockies starter Jamie Moyer accuses him of relaying signs from second base. He claims he’s never stolen or relayed signs in his life. Maybe he has, maybe he hasn’t. But he’s not going to let a 49-year-old lefty get the best of him, or have the last word.

He’s adding to a surefire Hall of Fame résumé, a first-ballot one at that. A .304/.402/.533 career line, 35th all-time in Wins Above Replacement among position players, one MVP award, and six top-10 finishes, yet he still lacks the fame and acclaim showered on contemporaries like Derek Jeter, despite Chipper’s superior numbers.

There’s sadness as he counts down the final games of his career, but also acceptance, even optimism.

“I think that I’m really ready to do something else. I’ve played professional baseball for 23 years, and I’ve got four boys at home. I’ve never been on a spring break or summer vacation or anything like that. I never would have envisioned myself playing at 40 when I was 18 years old, but I’m thankful that I’m still able to play and still able to play at a relatively high level. I’ll give it all I’ve got this one final year, then start the next chapter in my life.”

Chipper grabs a fresh Braves hat. As he pulls the navy blue brim over his brow, memories of the Chipper Jones who ran roughshod over the league for more than a decade come flooding back. If the Braves falter, he’s got just 20 weeks left in his major league career. The signature “A” on his cap staring back at you, it looks more like 20 more years.