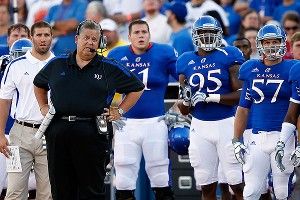 Things are already not going well for Charlie Weis at Kansas.

After KU got beat by TCU over the weekend, only the most Panglossian of Jayhawks could look at the school’s 1-2 record and say, “Hey, we’re halfway to matching last year’s win total.”

Kansas’s 20-6 loss to TCU appears deceptively respectable when you normalize it against the Vegas line that had the Horned Frogs as 21-point favorites. But, with three red zone turnovers, including a fumble out of the back of the end zone by TCU QB Casey Pachall as he was walking in for a score, and a missed chip shot field goal, TCU made a considerable effort to piss away their Big 12 conference debut.

Moreover, the week before, Weis and the Jayhawks lost at home to Rice. To give that some context, Rice had previously been 0-20 all-time against the Big 12. In those 20 losses, the Owls suffered an average margin of defeat of slightly over 29 points. They were competitive — and “competitive” here is losing by fewer than 17 points — in exactly two of those 20 games.

There are a couple of possible explanations for Kansas’s early-season struggles.

The first is that Charlie Weis is not a good college head football coach. Over five seasons at Notre Dame, Weis went a pedestrian 35-27 (a .565 winning percentage). He was particularly bad in close games — where good coaching can presumably be the difference between winning and losing — going 4-7 in games decided by three points or fewer and a paltry 1-4 in overtime games. Worse for Weis, the Irish had been favorites in all five of those OT games.

The nadir for Weis was either when:

A. He lost to Navy for the second time in three years (both at home, no less) when no coach at ND had lost to Navy in 43 previous tries.
B. He managed back-to-back losses to a Dave Wannstedt–coached team.
C. He lost to a two-win Syracuse team in South Bend.

That Syracuse team was so bad they had already fired their coach, Greg Robinson (he was allowed to coach the last two games on the schedule). The Irish were 20-point favorites. At home. And had a 13-point fourth-quarter lead. Weis still managed to pull out a defeat.

The answer is, of course, (D) All of the above. Weis did an excellent job of making Notre Dame comfortable at or near their low point for a good long while. No sense hurrying a genius.

But all of that obscures the fact that Weis was incredibly good for his first two years when he went 19-4 in the regular season. In fact, it almost seems inconceivable now, but in 2005, Weis’s first season, a 9-2 Notre Dame were literally two plays away from (probably) playing for the BCS national championship. Both losses occurred on the very last play of those games. They simply neglected to play defense against Michigan State on the Spartans’ first offensive snap in overtime in one game. In the other, USC cheated. If not for that, Notre Dame would have likely finished the regular season undefeated.

Even in his second season, Weis’s team won 10 of its first 11 games before getting exposed by legitimate speed at USC and LSU.

It wasn’t until 2007 that things went to shit and the Irish went 3-9. So what happened?

That brings us to the second possibility of what’s wrong with Kansas. And that’s Ron Powlus. Yes, that Ron Powlus, the guy who was going to win between 13 and 15 Heismans while quarterbacking at Notre Dame but ended up winning only zero.

In 2007, Weis hired Powlus as his quarterback coach. Over the next three seasons Notre Dame went 16-21, including that 3-9 season in his first year. When the entire staff was sent walking with the hiring of Brian Kelly, Powlus and Weis went separate ways for a couple of years.

Weis first went back to the NFL as offensive coordinator for the Kansas City Chiefs (and remember, it was as an NFL offensive coordinator that Weis picked up his three Super Bowl rings). With Weis, the Chiefs led the league in rushing, were plus-6 in wins over the previous season, and won the AFC West. That’ll get you job security in the NFL. (The next year Weis went to the University of Florida to be offensive coordinator for Will Muschamp. They were only the fifth-best college football offense in the state of Florida. So let’s keep that out of the discussion for now.)

Powlus, however, went to the University of Akron. And this is where it gets fun. And sad. But in 2010, Powlus was again hired as a QB coach. In his two seasons at Akron, the Zips went 2-22 (that’s two 1-11 seasons). Akron weren’t world-beaters before Powlus, but they had won three games in 2009.

In 2011, Powlus’s second season at Akron, they were particularly abysmal. The Zips went 11 quarters and gave up 140 points before they scored their first touchdown. They lost 41-0, then 40-3, then were losing to Cincinnati 59-0 before picking up a couple of fourth-quarter sympathy touchdowns.

The season before Powlus, the average margin of defeat for Akron was 18.89 points. By Powlus’s second season, it was up to 28.64 points. Over two years, Akron were losing more and losing by more.

Why is this a problem for Kansas? Because Powlus is Weis’s quarterback coach at KU. And teams with Ron Powlus as their QB coach are, current season inclusive, 19-45 (a .297 winning percentage).

It might be the case that Charlie Weis still isn’t a good college head football coach. And his play calling in the second half against TCU might have been the largest contributing factor to KU losing. With the game still in reach at 17-6 in the third quarter and with KU popping off about four yards per rushing attempt, Weis called for passes on 23 of the next 24 non-punting plays, including 18 in a row at one point.

So until Weis can definitely prove himself at the collegiate level (or maybe just stop handicapping himself with his own hubris), at the very least it seems a bad idea to carry around a bad-luck charm like Powlus.

Michael Bertin is a freelance writer