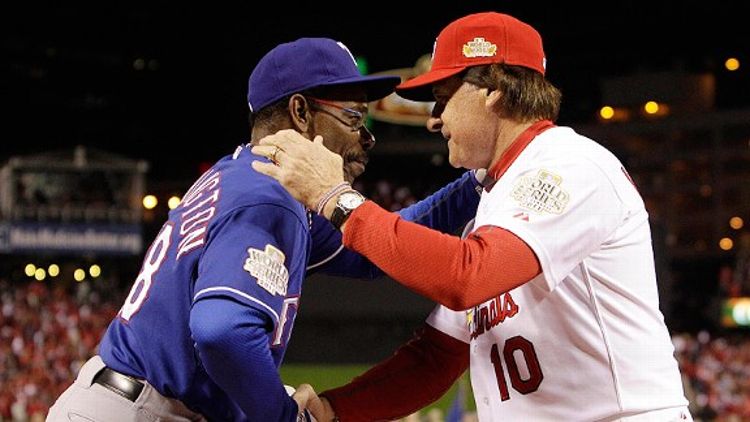 During Wednesday’s podcast, Rany Jazayerli said the Cardinals would likely steal a World Series game at some point, because Tony La Russa would outmanage Ron Washington.

Let us count the ways that La Russa either outfoxed the Rangers, or Washington shot himself, and his team, in the foot during the Cardinals’ 3-2 Game 1 victory.

Nelson Cruz, coming off one of the best playoff series in baseball history, gets rewarded by moving up in the order … one spot, to sixth from seventh. Swapping spots with him is Mike Napoli, who was the best hitter in all of baseball in the second half of the season. Meanwhile, Elvis Andrus, who hit five homers all year (zero last year), bats second. Josh Hamilton, last year’s MVP and one of the most dangerous hitters in the game, is homerless this postseason, taking weak swings due to a groin injury that’s rendered his lower body nearly useless. It might make sense to slot him in a prime lineup spot when he’s healthy. He’s not healthy. And he’s batting third.

It’s more important to get your best nine players in the lineup than it is to slot them in the right order. But building an optimal lineup can still give a team a small advantage, and the playoffs are all about leveraging those small advantages. By batting Mike Napoli (.444 wOBA, best in MLB for hitters with 400 PA or more) five slots below Elvis Andrus (.323 wOBA), one of your worst hitters becomes more likely to bat once more in a game than your best hitter.

TOP OF THE 1ST

After Ian Kinsler raps a single off David Freese’s glove (arguably the Cardinals’ biggest tactical error of the game, having the range-limited Freese play in against Kinsler, on a 2-0 count, after Tim McCarver predicted the result), Washington decides to force the action with Andrus at the plate. The Rangers manager calls for a hit-and-run. Kinsler, making the mistake many runners make when a hit-and-run is called, gets a bad jump, likely expecting the ball to be put in play. It isn’t. Andrus misses the pitch by a mile, and Kinsler, a terrific base-stealer under normal circumstances (86 percent success rate, third-best among active players with 100-plus steals), gets thrown out. The Rangers go down 1-2-3.

TOP OF THE 6TH

After Kinsler leads off the inning with another single, Andrus steps to the plate. Having apparently learned his lesson, Washington elects not to hit-and-run again. Instead, he hands the Cardinals an out, ordering Andrus to sacrifice. Hamilton and Michael Young fail to cash in the run, and the Rangers don’t score. That’s now two outs directly caused by Andrus batting second. It’s not that small-ball tactics never have a place in baseball. Sacrifice bunting in the ninth inning of a tie game can make all kinds of sense, for instance. But you can’t help but wonder how the first and sixth innings might have gone after leadoff singles if Napoli or Cruz had batted second instead of Andrus (or even bat Napoli 2 and Cruz 3, drop Hamilton to 6 and 7).

BOTTOM OF THE 6TH

After a one-out double by David Freese, a wild pitch that sent Freese to third, and a Yadier Molina strikeout on a high fastball, Nick Punto comes up. The joke tweets are flying about Punto’s quest to win series MVP. After rapping a single his first time up, Punto drew an intentional walk in the fourth in the same spot as he’s facing now: runner in scoring position, two outs. The ploy worked out last time for the Rangers, in the sense that Chris Carpenter struck out to end the inning and the Cards didn’t score any more runs. But by clearing the pitcher’s spot, the Rangers allowed St. Louis to open the next inning with the top of the order, and without the benefit of an ostensibly free out. Meanwhile, Punto’s a career .249/.325/.327 hitter who’s no better vs. lefties (with an .809 OPS this year, granted, but we’ll take 2,984 career plate appearances as a more reliable sample than 2011’s 166 PA).

Still, having dodged a bullet the first time, the Rangers walk Punto again here; not intentionally, but with C.J. Wilson missing the strike zone by a wide enough margin to lead you to believe they were pitching around Punto, granting an unintentional intentional walk. Instead of Carpenter batting this time, though, the Cardinals bring in Allen Craig, their best bench bat. The Rangers counter by lifting Wilson for Alexi Ogando. On a 1-2 count, Ogando delivers a 98-mph fastball, knee-high and down the middle. Craig slices the ball to right, just out of Cruz’s reach and in for an RBI single, giving the Cardinals a 3-2 lead. Ogando had been dominant throughout the playoffs and owned the platoon advantage against Craig, plus Craig did a masterful job of going the other way on a pitch some other hitters might not even see.

TOP OF THE 7TH

Fernando Salas starts the inning for the Cardinals, and promptly puts men on first and second with one out. La Russa brings in lefty reliever Marc Rzepczynski to face lefty hitter David Murphy. Teams’ increased focus on building enormous seven- and eight-man bullpens has meant fewer roster spots for hitting specialists who can deliver big pinch-hits. Washington sends in defensive specialist and pinch-runner Craig Gentry (.246/.314/.306 in 207 career plate appearances, with a little more pop but also a .298 lifetime OBP vs. lefties) to bat for Murphy. Rzepczynski gets two strikes on Gentry, then throws a hanging slider that a real hitter might have hammered; Gentry just watches it sail into Molina’s glove for strike three.

With the pitcher’s spot due up, Washington scans his bench and decides to send up … Esteban German. The 33-year-old utilityman isn’t a terrible hitter by any means, and is downright playable vs. lefties, with a career line of .292/.367/.416 against them. Problem is, he hasn’t grabbed a bat since the Coolidge administration (Sept. 25, to be precise). Yorvit Torrealba’s actually taken some cuts during the postseason, which likely more than negates German’s moderately superior career results against lefties — though perhaps the bigger problem is how, with six position players on the bench, Yorvit Freaking Torrealba could be your best option against a lefty. Rzepczynski quickly gets ahead 0-2, bounces a changeup in the dirt, and gets German to chase. Strike three, inning over, threat over.

ESPN SweetSpot honcho David Schoenfield tweeted that Washington sent German up, hoping La Russa would counter with Octavio Dotel, so that he could then send Mitch Moreland to the plate to face a pitcher who annihilates right-handed hitting but struggles against lefties. That’s possible, though Washington’s track record of tactical mistakes in big spots over the past two years of playoff games makes you wonder if that might be too generous. Either way, La Russa stuck to status quo, and the guy who hadn’t batted in 24 days predictably went down quietly.

Washington’s poor decisions and La Russa’s shrewd use of his reserves and especially his bullpen certainly weren’t the only reason the Cardinals eked out a one-run win. Carpenter silenced doubters who worried that a nagging elbow injury might render him ineffective, tossing six innings and giving up just two runs and six baserunners, against four strikeouts. Matt Holliday and Lance Berkman came through with big opposite-field hits in the fourth, giving the Cardinals a 2-0 lead. Wilson was anything but sharp for the Rangers, walking six batters (albeit three of them either intentionally or unintentionally intentionally), including a hit batter, and missing his location on a bunch of pitches, including the two to Holliday and Berkman in the fourth that caught too much of the plate and fueled the Cardinals rally. La Russa also wasn’t perfect, batting lefty-swinging Jon Jay second rather than, say, Berkman or Freese, thus setting up a situation similar to Washington’s with Andrus, where lineup construction shoehorned him into self-defeating moves, such as Jay’s sacrifice bunt in the fifth.

There were silly moments too, such as McCarver’s Great Spelling Adventure, surprisingly prolific (and audible) cursing by Carpenter, and a blown call in the ninth inning that somehow made Fox’s ridiculous new infrared view technology almost useful, beyond its obvious comedic value.

Still, The Jazayerli Prophecy came true. Talk to anyone in the Rangers organization, from the players up to the front office, and they’ll praise Ron Washington’s ability to manage personalities and run a harmonious clubhouse. Those are difficult skills to quantify, but they exist, and teams certainly benefit from such skills. But Washington just isn’t good at making in-game decisions, and the Cardinals can (and just did) eat his lunch when that happens.

I figured the Rangers’ enormous talent would override that looming disadvantage. It very well still might. But it sure as hell didn’t happen in Game 1.