Can Joel Embiid Win Rookie of the Year Without Setting Foot on the Court? 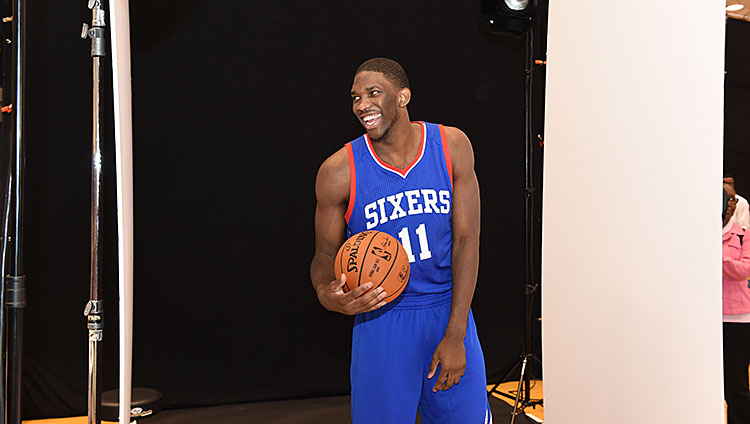 Thanks to the online savvy that’s already earned him a cult fan base, Sixers center Joel Embiid won’t even have to suit up this season to become this year’s runaway rookie phenomenon. Before summer league even started, Embiid had already crafted a handful of successful memes: #JojoKilledALion, #WeAllFromAfrica, #JoHanna, surgery table selfies, and the still-forming-but-dripping-with-potential #EMB11DSADVICE. In fact, Embiid’s online sensibilities were already so well-honed before the NBA draft that the great surprise that emerged from his ESPN The Magazine profile wasn’t that he didn’t recognize a picture of Kevin Durant or that his whirling turnaround jumper was so staggering that it made an entire scout-packed workout erupt in laughter (“Was that good?” a confused Embiid asked Rudy Tomjanovich.) It was that Embiid’s management team, under super-agent Arn Tellem, had decided to hire a social media consultant.

As someone who has followed Embiid on Twitter since he delivered his letter of intent to Bill Self, I saw his online game emerge before his on-court abilities began to blossom. Even though the post-draft period is lousy with spending — second-round pick Cleanthony Early was rumored to spend $62,000 at Rafaello & Co before the draft — Embiid hiring a consultant to guide him could be classified as the biggest waste of money of all time.

Early in the fall, he chided his classmate Andrew Wiggins for being a fanboy when Wiggins included Drake in his “top 5 dead or alive” list, spinning off that argument to claim he was the best rapper under 20 — in French, not in English.

Embiid hosted a dorm room Ustream, witnessed in full by me and maybe 10 other people, to have a fireside chat about a number of topics — in this broadcast, he professed to being a virgin and wanting to wait until marriage to have sex. (That being said, Embiid said he definitely wanted to marry Dakota Gonzalez, a twin and popular Instagrammer who played on the Kansas women’s basketball team at the time.) There was that whole lion thing. A natural goofball who was definitely a little attention-hungry, Embiid was far and away the most fun part of following the bumpy 2013-14 Kansas Jayhawks.

In the course of that season, Embiid — thanks to a completely bonkers series of events in a road game against Iowa State — rocketed up NBA draft boards and seemingly overnight went from “raw prospect” to “once-in-a-lifetime talent.” But his ability to nail the tone of the Internet was never a question, and it’s not a stretch of the imagination to think of a younger Embiid gobbling up Reddit threads while growing up comfortably in the Yaoundé suburbs.

Mirroring the progression he’s made on the court, Embiid’s Twitter game has grown more sophisticated and responsive, from his hilarious live-tweeting of the Drake-hosted ESPYS — “Nah fam, you trying to date her” — to his one-sided LeBron recruitment saga. Though I take proclamations of “GREATEST TWITTER ACCOUNT EVER” with a grain of salt, Embiid’s social media bonanza rings true to his personality, a fun-loving and offbeat kid with a pink lemonade addiction wanting to see how far he can push it while not taking any of it too seriously.

Rare moment of me smiling with my brother @22wiggins .That burger was juicy and I ain't even flexing #Wigginscantjump pic.twitter.com/XFN9lwDlrM

In a lot of ways, Embiid’s online presence reminds me of another master of the form: Lil B, the BasedGod. Above all, the BasedGod knows to give the people more of what they want — he’s constantly throwing stuff against the wall and seeing what sticks (stick: Kevin Durant vs. Lil B; Non-stick: Lil B’s rock career). So when Embiid noticed that people couldn’t get enough of his goofiest larks — it should be noted that Rihanna did end up following Jojo back — he gave them more of it, like any veteran performer might, and ended up ditching the poorer material (the repeated tweets of “These girls ain’t loyal!” comes to mind, but it could be that Embiid has something bigger in the works there). At the end of the day, the barstool question remains: Does Embiid have a higher ceiling as a basketball player or as an online personality?

I want to answer that so badly but I can’t. All right, I’m out for a couple of weeks.