Can Bayern Munich Be Beaten? 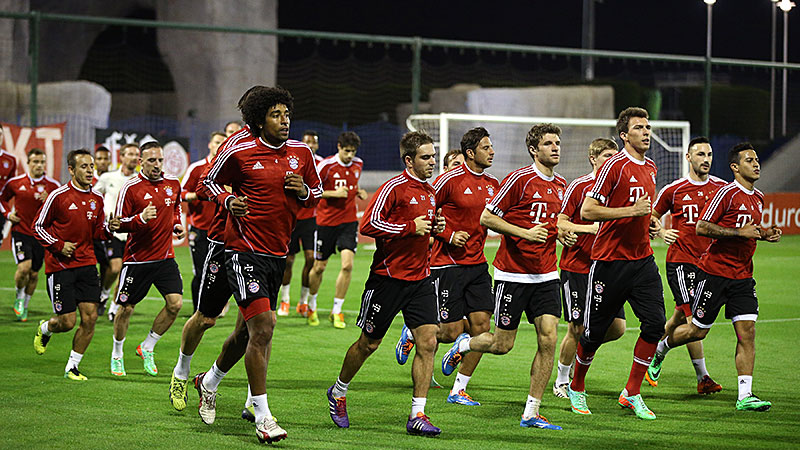 On Tuesday, Bayern Munich visit Arsenal in the first leg of the first knockout round of the UEFA Champions League. Bayern are the holders of the European Cup. In Germany, they’ve won 19, drawn two, and lost none. They are 16 points clear of the second-place team in the Bundesliga, and their bench could walk into almost any starting lineup in Europe. Some have suggested that Bayern’s biggest obstacle to repeating as Champions League winners is their complacency, but then some seem to forget that Bayern are managed by one of the great modern managers in Pep Guardiola. Last weekend, Bayern beat Freiburg 4-0. After the match, Guardiola made Bayern train, playing a practice match against themselves. So, no, they won’t be complacent. The questions is, can they be beaten?

The short answer to this question is no. With Borussia Dortmund suffering a catastrophic run of defensive injuries, there is no team in Germany capable of exploiting Bayern in a revealing way. The club known as Hollywood FC has only conceded nine goals in Bundelsliga matches, and have only lost a single match in any competition, a 3-2 Champions League group stage match to Manchester City in December. The transition from the reign of Jupp Heynckes to Guardiola has gone as smoothly as possible. Bayern’s attacking output has been staggering, with Philipp Lahm’s new role as a holding central midfielder freeing up the players in front of him to maximize their creativity. 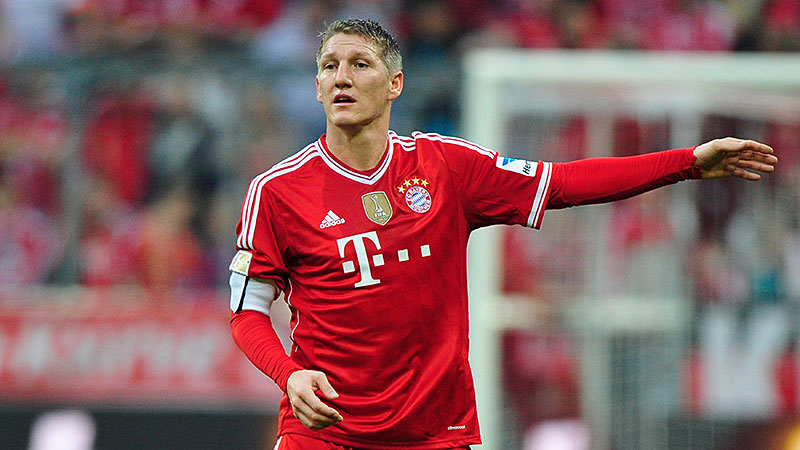 To even try to stop Bayern Munich takes a very cynical approach. Since Bayern hit their stride with the introduction of Mario Goetze into their midfield setup, no team has held the Bavarians to a single goal. Bayern’s attack is relentless, with Thiago, Goetze, and Toni Kroos all capable of controlling matches with their passing, and Arjen Robben, Mario Mandzukic, and Thomas Muller pouring in goals. Robben and Muller have developed a particularly devastating chemistry under Guardiola, with the two players capable of switching positions from along the right side of Bayern’s attack at will, providing starkly different yet equally brutal challenges for defenders. Muller creates space behind defenders with his off-the-ball movement while Robben attacks directly while in possession. Their interplay will likely create chances against Arsenal, as Guardiola will look to exploit Arsenal the same way Luis Suarez and Daniel Sturridge did for Liverpool.

Bayern impressively didn’t suffer from Bastian Schweinsteiger’s four-month absence, and now he is back in action as well, leaving the German champions with too many midfield options. The only question mark Bayern have in attack are injuries down the left flank; Goetze may well spend much of his time out wide compensating for the absence of Franck Ribery. Regardless, Bayern will likely create enough chances to score at least a pair of goals at the Emirates. 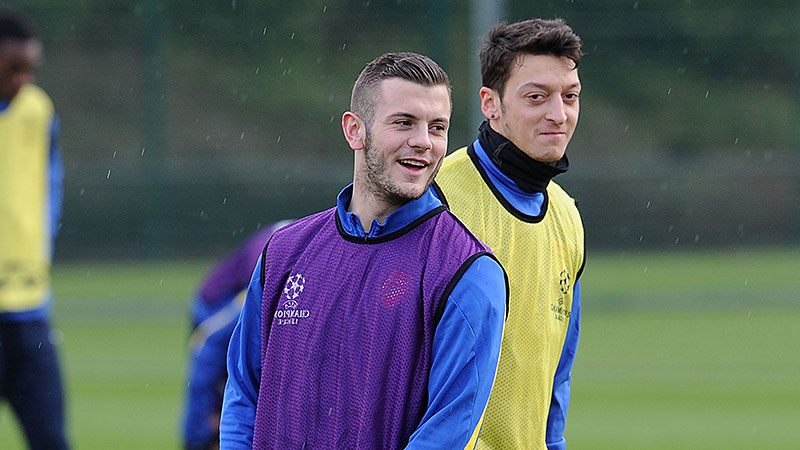 Arsenal’s Mesut Ozil is perhaps the only German player not on Bayern’s team that has the talent to start for them, and he will need to be instrumental if Arsenal hope to compete. Unfortunately for the North Londoners, Ozil’s style of play is not ideally suited for unlocking Munich’s defense.

Much has been made of Ozil’s midseason slump, with fatigue often mentioned. Unlike Spain and Germany’s leagues, England has no winter break in its schedule. If anything, the matches come even more quickly, which is cited as a reason for his malaise. But Ozil isn’t really the problem; rather, it’s the talent that surrounds him. Ozil is a chance-creation machine, and his most effective weapon is the through ball. Aaron Ramsey’s early-season Johan Cruyff impression was the perfect pairing for Ozil’s wizardry, and Arsenal surged to the top of the Premier League on the back of it. Even when Ramsey wasn’t the recipient of Ozil’s distribution, his presence and movement opened up gaps in opposing defenses that could be exploited by striker Olivier Giroud. Without Ramsey, Ozil looks sluggish, and his form has dipped in terms of cumulative chance creation.

One would expect that with Bayern applying pressure from their midfield, Arsenal’s through ball–driven attack won’t be on the table. In fact, the unavailability of wingers Ribery and Xherdan Shaqiri has a silver lining for the German club: Bayern will likely control the middle of the pitch even more than usual, forcing Arsenal to create from out wide. 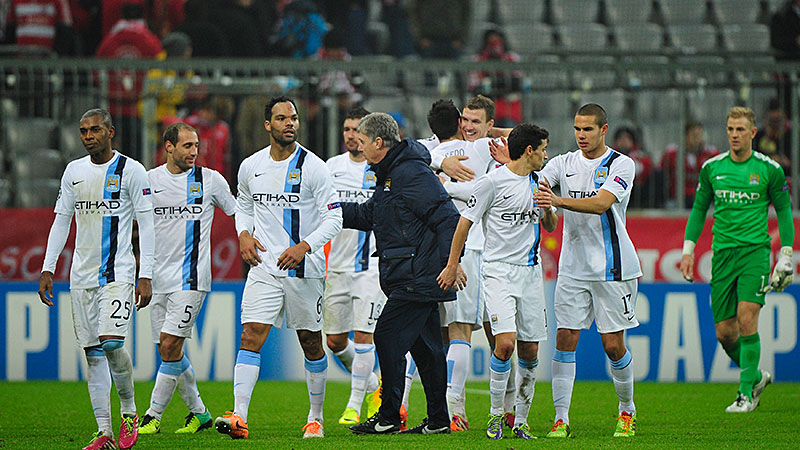 Bayern Munich has lost one match this season, against Manchester City at the Allianz Arena. It’s hard to see what lessons Arsenal could learn from the match. City went down 2-0, quickly, to the sort of goals that Arsenal are vulnerable to (balls in behind the central defense, and set pieces).

Two of City’s goals were influenced by the play of their wingers. They used the speed of Jesus Navas to get behind David Alaba. Navas’s crossing ability and Bayern’s shambolic clearing, plus an unnecessary penalty, combined to effectively gift Manchester City three chances. City took all three, and the match.

Unfortunately for Arsenal, their best option to beat Bayern’s fullbacks down the flank is Theo Walcott, and Walcott is out for the foreseeable future after tearing his ACL against Spurs in his team’s pyrrhic FA Cup win. This leaves a suddenly in-form Alex Oxlade-Chamberlain as Arsenal’s best hope to score.

If I squint hard enough I can see a match in which Ox runs rampant for a half, down Bayern’s flank, and creates a number of decent chances. That said, looking at the chances City created, they all required a great deal of work and luck to convert. Lukas Podolski and Giroud are capable of doing that work, but will Bayern help them by consistently failing to clear under no pressure? 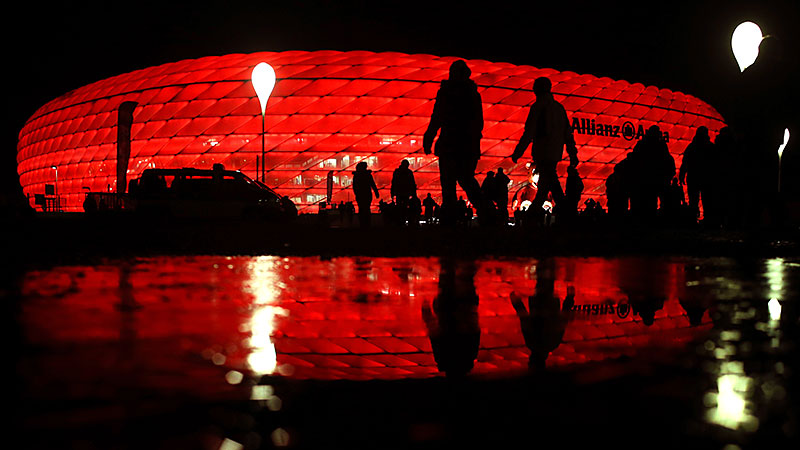 The tactical matchup between Bayern Munich and Arsenal would seem to heavily favor the Germans. They are capable of creating chances in ways that Arsenal have trouble defending, they can shut down Arsenal’s best mode of attack (through balls), and Arsenal’s most effective hypothetical plan B is on the shelf with a knee injury. This is football, though, and anything can happen!

For example, pre-match calamities. Ballon d’Or finalist Ribery is already out for Bayern’s clash with Arsenal. So is reserve winger Shaqiri. But who’s to say that a series of ironic disasters could not befall the rest of Bayern’s starting 11 on their way to Emirates Stadium in London? Alaba could run really quickly up a flight of stairs and find himself stuck at the top of London Tower. Robben could find himself mindlessly turning left on the way to the stadium and find himself arrested for recklessly driving into oncoming traffic in Piccadilly Circus. Dante could accidentally light himself on fire. Kroos could turn back time and transfer himself to Manchester United (why was this an actual possibility?). Thiago could decide to follow his namesake into the NBA.

Alternatively, what would seem like three surprising, isolated results over the past three seasons (Chelsea’s Champions League final win over Bayern at the Allianz, Arsenal’s 2-0 win at the Allianz last season, and City’s 3-2 comeback at the Allianz this season) could portend that no matter how much Arsenal goes down by in a first leg in London, some strange juju in Bayern’s home stadium will give any visiting Premier League side a chance to claw their way back into a tie. While the statistically inclined would say that three matches is not a significant enough sample size to say the Allianz is a cursed arena for German/British clashes, can we prove that it isn’t?

Really, though, Bayern, in its current state, is most vulnerable to a team that wants to use its wide players to create chances, while maintaining a defensive line that doesn’t allow the German club’s attackers to slip in behind. This year’s Real Madrid side seems like the one team that could really take it to Munich. The survivor of the Manchester City–Barcelona matchup could also put up a fight. Jose Mourinho’s Chelsea side may also be cynical enough to grind Bayern’s prolific attack to a halt. Frankly, a full-strength Arsenal side may well have been capable of troubling the Germans. However, Arsenal’s lack of depth, and the specific absences of Walcott and Ramsey, will probably cost them in this matchup.

The Lakers and Mavericks are trying to assemble trade offers for prospective free agent Kevin Love, but thus far the Timberwolves have given no indication they'll consider moving the All-Star forward by Thursday's deadline.