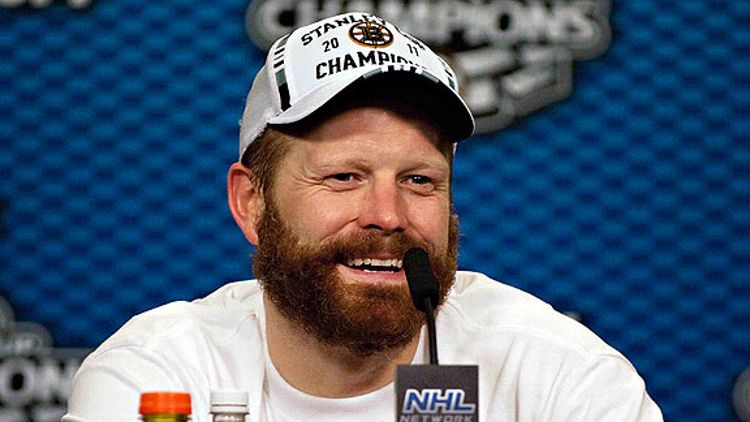 By the end of Game 7 of the Stanley Cup finals, the Bruins had become bears. Yes, the brown, four-legged beasts that gave the team its name and — for its first six seasons in the 1920s and ’30s — its logo. But that’s symbolism, and it’s unsurprising. It’s the way they became bears that’s incredible. They grew beards.

It’s possible that had the other team won, there’d be nothing to say about the beards. Men on a roll just do this. They turn superstitious and stop shaving. They’ll arrive at a final in Ye Olde Playoff Beard, and how bad it looks is inversely proportional to how good a title feels. But the Bruins transcended the Playoff Beard.  They wore the hair of work, force, and power, of Vikings and Visigoths. The beards also played into a powerful gay stereotype that wasn’t lost on anyone who knows the first thing about sexual coding, even if it hadn’t occurred to Bruins themselves.

These dudes were bears.

Stereotypically, a bear is stocky. He’s husky, rotund, or just fat. He’s into flannel and leather and younger men who he calls cubs. This dude is a bear. That is not the literal thing about the Bruins’ beards. Bears tend not to be all, “I’m a bear, yo.” The literal thing is that the Bruins literally looked like bears. The padding of the uniforms provided those extra plies of huskiness and, in Tim Thomas’ case, of squatness.

It’s possible only one sort of bear crossed the player’s minds as they clawed their way through the playoffs. It’s also possible that at some point, maybe after flying to Vancouver for the start of the finals, a player walked into the locker room, and said, “Guys, you know what we look like, don’t you?” Hockey might actually be the one professional sport where not only could someone wonder that aloud but where someone else really might know the answer. Perhaps that someone else could have been the coach, Claude Julien, whose face could use the cheesy pizzazz of a goatee or a soul patch.

By Saturday’s parade, the magic was over. Zdeno Chara, Patrice Bergeron, and Milan Lucic, rode a yellow duck boat, along with the rest of the team, around the city. Their faces were largely bushless — well, Nathan Horton was stubbled in a cologne model sort of way. They wore shorts, jeans, flip-flops, and black Stanley Cup T-shirts. The shirts had a charming cheapness — 50 cents to make and $35 outside TD Garden. They wore them over whatever they’d been wearing before they got on the boat, the way some guys do: Hey, a free commemorative shirt! Together, they looked like they had just invaded the watering hole whose ambiance only minutes before you had come to love. This is a long way of saying: They’d gone back to seeming regular. The beards hadn’t been manscaped. They’d been razed.

Bruin is a folkloric word for bear that implies a whimsical make-believe that the shaved men grinning on the float confirmed Saturday. The cup, of course, was real: A tactile souvenir stolen from a dream. The follicular shrubbery of the finals was now a figment of slumber. But Tim Thomas’ beard rode that boat as a trinket, too. It was smaller than its rusted playoff self. It had been tamed. But it was there to remind us of the hairy glory that had brought us to this disappointingly hairless one. Thomas became the face of the playoffs — his pugnacity, flexibility, and pure skill were exhilarating. He became the beard of playoffs, too. And there was exhilaration in that. If you came to see him as a bear, he was also a paragon of what else a bear could be, a tough, tender vision of love — him loving you, you loving him, him protecting you. Of course, he’s the goalie. You can always sense warmth in Thomas’ beady eyes — not lust or desire, nothing deviant or super freaky, just pure love. He’s the bear that Timothy Treadwell expected to find in “Grizzly Man.” He’s the aberrant bear you bring home from Castro Street to mother. Even in the finals after he’d just laid out a Canuck, he radiated more affection than brutishness or anger. He’ll deck you, but he’ll also water your plants.

A few days ago, we learned that Thomas had plans for the beard. He spent part of his Monday in a salon chair on a stage near Gillette’s headquarters in South Boston and proceeded to allow the barber, Arthur Mirzakan, to apply his blade. Gillette has wrangled other champions into this promotional charity stunt — Johnny Damon and Ben Roethlisberger, to name two. Thomas might have been the company’s kindest, least unsavory cut. When Mirzakan was finished, all that remained was a mustache. It was hard to watch Thomas regard himself and not feel good. The mustache gave him a new touch of class and moved him one from realm of alluring dependability to another. The Bruins’ biggest bear had become the old Brawny paper towel guy.