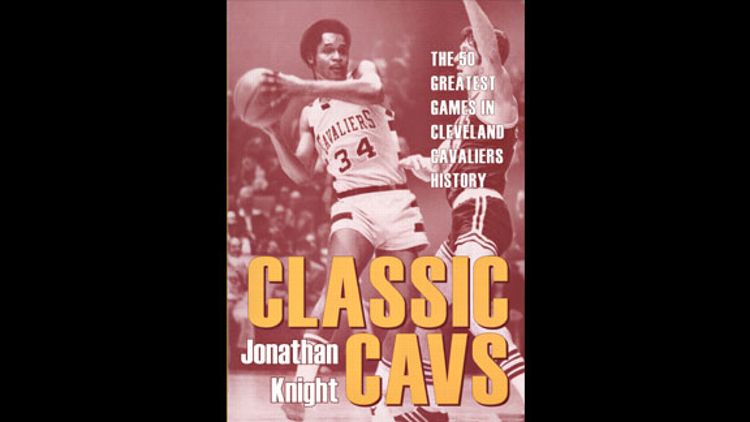 At first glance, it’s hard to tell if Jonathan Knight’s 2009 book Classic Cavs: The 50 Greatest Games in Cleveland Cavaliers History is an honest-to-goodness NBA chronicle or some kind of sick joke. On the cover is Austin Carr, a one-time All-Star the Cavaliers selected with the first overall pick in the 1971 NBA draft. The paperback’s photo insert features Cleveland greats Larry Nance, Nate Thurmond and Luther Rackley, among others. You look at this book — its subtitle, its reverence for Craig Ehlo — and you think, “This exists?”

Knight anticipated scorn from the coastal elites. In fact, he addresses it in the first sentence of the promotional copy on the book’s back cover: “It’s far too easy to allow the national media and disparaging fans to undermine Clevelanders’ views of their professional sports teams. … There are countless moments of glory in the fertile athletic history of Northeast Ohio. ” You go, boy.

In fact, it’s not that hard to imagine how Classic Cavs came forth into this world. It’s the third installment of a trilogy, the first two being Classic Browns and Classic Tribe. While the Browns and Indians have both had run-ins with Cleveland’s snake-bitten sports history, each team has won championships in its respective sport and fans from outside Ohio can recall a few of their seminal moments and great players. Try doing that for the pre-LeBron Cavs, and all you get are Darius Miles and Ricky Davis jokes, the memory of Mark Price winning a couple three-point contests during All-Star Weekend, and the image of a very bloated Shawn Kemp. So yes, Classic Cavs might be a bigger stretch, but to omit it completely would have been a greater insult to Cleveland basketball fans.

Plus, it’s not hard to imagine that when the Kent State University Press was preparing to release Classic Cavs in October 2009, the author and publisher expected the Cavaliers to win their first NBA championship within a couple years. The team was coming off a 66-win season and a trip to the Eastern Conference Finals. They traded for Shaq before the 2009-2010 season to ensure that Cleveland wouldn’t lose to Dwight Howard’s Orlando Magic for a second straight year. LeBron James would become a free agent at the end of the year, but basketball’s talking-head corps was in agreement that he would probably test the waters and then return to Cleveland and more money than any other team could offer. And whenever LeBron brought the team its first NBA title, he would single-handedly drag Classic Cavs into relevance. All the underwhelming moments in Cavaliers history, all the games that seem a tad mundane for a best-ever list — like a 73-70 win over the Chicago Bulls in February 1997, sparked by 12 points from Vitaly Potapenko — would be recast as steps along the way to an eventual and triumphant championship.

Then Game 5 of the 2010 Boston series happened. Then the Decision. Unless the Cavaliers strike gold with the first and fourth picks in a weak NBA draft Thursday night, it could be a very long time before the team contends for another title, and Cleveland fans may be stuck dredging their memories for Potapenko gems.

Four of the top ten games in Classic Cavs come from the LeBron James era. In retrospect, some of them are hard to read about. Knight sets the scene LeBron’s Game 2 buzzer beater against the Magic in the 2009 Eastern Conference Finals as if LeBron were Batman. Hedo Turkoglu put Orlando up 95-93 with a second remaining, and Cleveland needed a miracle: “But even in the depths of their despair, they knew there was a man on the floor capable of delivering one.” After describing LeBron’s shot rattle through the hoop and the Cleveland crowd’s jubilant response, Knight calls the moment “emblematic of the heroics of the greatest player in Cavaliers history.” He’s right, and so it stings even more.

The fifth-greatest game in Cavs history is LeBron’s transcendent 48-point overpowering of the Detroit Pistons in Game 5 of the 2007 Eastern Conference Finals, where he scored Cleveland’s last twenty-five points in the fourth quarter and two overtimes. The James quote Knight dug up from earlier in the series might have been apt in 2009. Now, it’s devastating. “I live for the fourth quarter,” James said. How does Cavs owner Dan Gilbert react to these passages? Does he think of his team’s unfulfilled promise and shed a tear into his glass of Bordeaux? Or does he just scribble away in his LeBron James slam book?

Aside from the LeBron-related awkward moments, Classic Cavs turns out to be a trove of not lost, but undervalued and partially forgotten NBA history. Knight recounts Walt Frazier’s return to Madison Square Garden after being traded from the New York Knicks to Cleveland in 1977. Frazier’s career wound way down with the Cavaliers over three injury-riddled seasons, and Cleveland’s owners eventually concluded he was faking it because, in Knight’s words, Frazier “didn’t like playing in Cleveland.” But on that first trip back to the Garden he was the Clyde of old, putting up a line of 28 points, eight rebounds, five steals and four assists in an overtime win. In the final seconds, Frazier dribbled out the clock and pumped his fist to acknowledge the New York crowd’s standing ovation. Another chapter tells of a one-point Cavs victory over the Bad Boy Pistons in 1989, where Brad Daugherty and Bill Laimbeer scuffled, then Isiah Thomas held Daugherty from behind long enough for Laimbeer to land a punch on his face. After the game, Daugherty confirmed what we’d always hoped: “Laimbeer punches like a girl.”

There are several “miracles” in Classic Cavs. Some of them, like “The Miracle of Euclid Avenue” and “Miracle Part II,” don’t sound very miraculous. The most important one is is the greatest game in Cleveland Cavaliers history, as far as Knight sees it. Game 7 of the 1976 Eastern Conference Semifinals, which Cleveland won 87-85 over the Washington Bullets on a last-second Dick Snyder running bank shot, is known as “The Miracle of Richfield,” named after the coliseum where the Cavs played home games. The game wasn’t televised, but its memory survives in Classic Cavs.

I’ll admit that I first picked up Classic Cavs because its premise made me smirk. Half the people who saw me reading it made the same remark: “That looks depressing.” Not really. I’m thankful Jonathan Knight did this. For me, basketball minutiae is an obsession. I love the all-time greats, but I think of Popeye Jones and Ace Custis almost as much as Tim Duncan and Michael Jordan. The names of the marginal stars I played against in New York’s Public School Athletic League “B” Division in the late Nineties — guys like Khalfarni Hyde, Keymonte Edwards, and Ennler Garcia — loom as large in my memory as “global icon” Lebron James. After reading Classic Cavs, I can add Foots Walker, Campy Russell and Bingo Smith to the hoops card catalog in my brain, somewhere between Danny Schayes and Shaquille O’Neal.