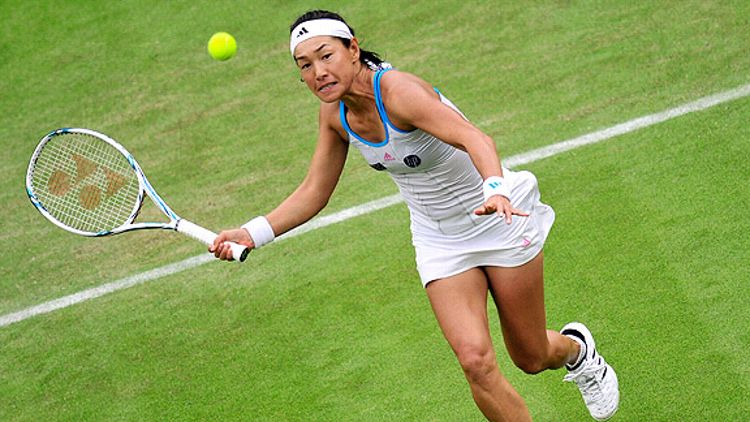 When Andy Roddick turned pro in 2000, he reminded me of my tennis camp instructors — the guys who looked better under baseball caps and wore logos a little too large, the guys who smiled a little too broadly at the older female campers, who, in fairness, were only a year or two too young. Really, though, it’s the way Roddick cocks his racket on his backhand that makes me think of those clinics. His stroke is unusual, always considered his liability; his grip and set-up constrain him. But it’s exactly the backhand that I remember that our instructors, some decent junior players, would use to bludgeon the ball, showing off while we drank our water.

As campers we tried to hit our backhands like that, too, and we burdened our forehands with topspin. We mocked the pushers in our midst. Our instructors would call us into the net and tell us to shorten our backswings, to reverse our opponent’s power and block back the ball, to hit not with force but with angles, to be canny, to focus on our footwork and fitness. We’d pretend to agree. Then we’d return to the baseline and send our ground strokes into the back fence.

That was in 1996, the year Kimiko Date-Krumm retired. (Back then, she was just Kimiko Date. She later married the race car driver Michael Krumm.) She had pushed Steffi Graf that summer at Wimbledon, a semifinal match stretching over two soggy days. I disliked her. She was the kind of player I hated to play, the kind who knocked every ball back. She took the ball early with little half-swings; she scooted around the grass; she played percentages, sometimes hitting awkward and improvisational shots. She won the second set. Against Steffi Graf! Graf came back the next day and won the third, and I thanked God for English weather. To a girl who dreamed only of power, Date-Krumm’s style of tennis seemed ugly and old.

I long ago learned I was wrong. And who should help teach me this lesson but Andy Roddick?

Kimiko Date-Krumm lost to Venus Williams yesterday 6-7(6), 6-3, 8-6. By now you probably know this. You’ve probably heard that Date-Krumm is 40 years old, and that she had retired for 12 years. You’ve probably even heard something about the match — how Date-Krumm played a thrillingly retro style, chasing down balls that she had no business reaching, charging the net, hitting slices and drop shots and lobs. With a white Yonex racket and her flat abrupt strokes, she looked like an elderly club player facing her more powerful daughter, dominating her at times (doesn’t it always work like that?), but, in the end, succumbing to the superior server.

Tennis enthusiasts were ecstatic. Finally, a match that wasn’t merely a string of rallies. Finally, a match-up of different styles, different tactics, and canny play, in which the two players developed their points, playing tactical tennis instead of merely blasting each other off the court. Since I find some pleasure in watching players blast each other off the court — beauty in the big backswings, the range and fluidity of those strokes, the sheer athleticism — I’ve never been bothered by the decline of the old-school grass game. But it was a wonder to see Date-Krumm, and the way she turned defensive shots into aggressive ones.

Later in the day, Roddick stepped onto Centre Court for his match against Victor Hanescu. It was a routine win for the American, 6-4, 6-3, 6-4, remarkable only for the near flawlessness of Roddick’s play. He had 15 aces and zero double faults, won 93 percent of his first serves, and had 39 winners against only six unforced errors. Not bad for a guy who’s struggled with injuries and illness, who’s generally seen as past his prime.

Few people talk about Andy Roddick anymore. To hear the chorus lamenting the sorry state of American tennis, you’d think there were no American men in the top ten at all. (Poor Mardy Fish, who is actually ranked a spot higher than Roddick, but who is best known for having lost a lot of weight.) Once he was number one; once he won the U.S. Open; once he nearly beat Roger Federer in the finals at Wimbledon. That loss, in 2009, was hard to bear. Roddick lost his serve only one time — but at 14-15 in the fifth set. Game over.

It’s always like that for Roddick against Federer. He plays his best, and no matter. No shame, either, in losing to one of the greatest players ever, but you feel for him. He might have won a couple more grand slams but for the Fed. Instead he’s known as a good player who doesn’t move all that well, and there’s that backhand. Getting old, too. After 2009, he faded out of view.

But something was happening all the while. He became… if not elegant, then somehow classy. He’s become a more tactical player, adjusting his game, attacking when called for, playing it safe at other times. He developed a backhand slice, a defensive shot. When his massive serve began to fall off just a little, he adjusted it — even though it was still one of the best in the game. His serve is a strange and lovely motion, abbreviated and sudden, a catapult sprung.

Louisa Thomas is the author of Conscience: Two Soldiers, Two Pacifists, One Family — A Test of Will and Faith in World War I.