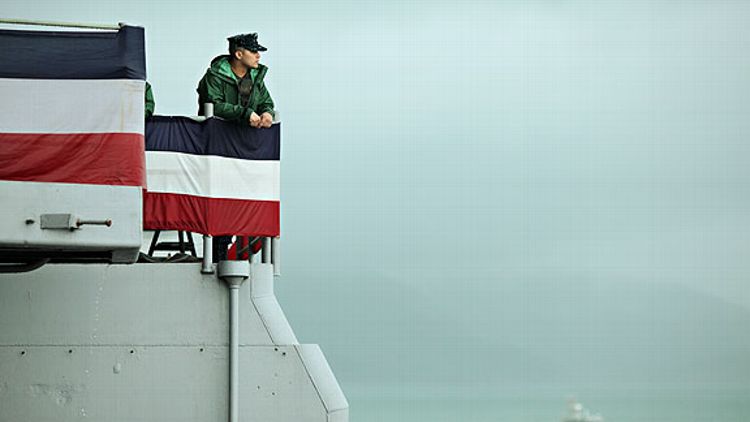 When it was announced in March, the inaugural Carrier Classic sounded, admittedly, like a cool idea. Take two signature hoops programs (UNC and Michigan State), schedule a game for Veterans Day, invite a few ESPN cameras, and do it all on the flight deck of a big, bad warship — before a crowd of mostly veterans and active military personnel.

But the warship, event organizers announced last week, will almost certainly be the USS Carl Vinson, the vessel that carried the one-eyed remains of Osama bin Laden to his burial at sea last month. “We find it to be a source of pride that this ship will make history twice in 2011,” said Mike Whalen of the Morale Entertainment Foundation, promoter for the event. “It’s strictly by schedule [that it’s the Carl Vinson]. It’s just the way it worked out.”

So it’s a coincidence. Fair enough. As a consumer of sports and holder of grudges, I should be giddy at the prospect of Roy’s and Izzo’s Boys stomping out the ship’s residual Osama-ness on the strength of their V-cuts and defensive shuffles. We can, very nearly, dance on the grave of evil’s most familiar avatar. Still, the New Yorker in me is unsettled. Tipping off on such a symbolic site, exactly two months after the 10th anniversary of 9/11, doesn’t feel like a celebration or a commemoration. It feels Pyrrhic, small. Even a little Roman — what with the specter of the dead wafting over the competitive arena.

The intersection of sports and socio-politics is neither new nor always problematic. When the Mets and Braves met in New York’s first ballgame after 9/11 — sharing on-field embraces as chants of “USA!” showered down from the Shea Stadium crowd — the message was unity. 9/11 happened to us.

This is different. Bin Laden’s death didn’t happen to anyone but him. And while we’re allowed to feel good that he’s gone, turning a basketball game into an attraction at his cadaver museum isn’t therapeutic to me. It’s weird. The choice to be there is ours entirely, the events poisoned by a lingering sense of insatiable voyeurism. (“I’m still trying to figure out where [the body] was,” event consultant Michael R. Rowe said during a site inspection on Monday.)

I was 12 on the morning of September 11, trying and failing to reach my parents from a landline at my Lower Manhattan middle school a couple of miles north. They were in our apartment, tucked two blocks below the towers, with Boomer, my golden retriever. Asbestos-tinged dust, piling like sand, had already begun to bleed in through our closed windows. We never slept there again. Boomer, sucking in blackened air all morning, would contract lymphoma and die before his time.

Osama bin Laden did these things to me — did far worse to my friends and neighbors — and his hold over my pubescent psyche never weakened. When distant planes disappeared behind the Manhattan skyline, I’d linger, waiting for the smoke. His every leaked video message informed the status of my anxiety cheat sheet, those color-coded alert levels I memorized like the stats on a baseball card. Yellow: Elevated. Orange: High. Red: Severe. I never needed to learn the others. To this day, when I visit my old neighborhood, I am struck first by the inescapable scope of the damage, next by how little appears remedied, nearly a decade out.

Bin Laden is a part of me — of almost all of us — and so, small as it may seem, any event that trades on his name assumes the gravity it carries. There is nothing inherently disrespectful about the Carrier Classic. A vessel that transports the decaying body of a mass murderer is not hallowed ground. His victims’ memories are in no way sullied by the exhibition. But by holding the game on this ship, the foremost associations are with bin Laden, not the USS Carl Vinson or the veterans or even good basketball. And I’m all for sober meditation on the thorny emotional implications of a man’s passing. I just prefer to do it without Jay Bilas and Sparty the Spartan looking over my shoulder.