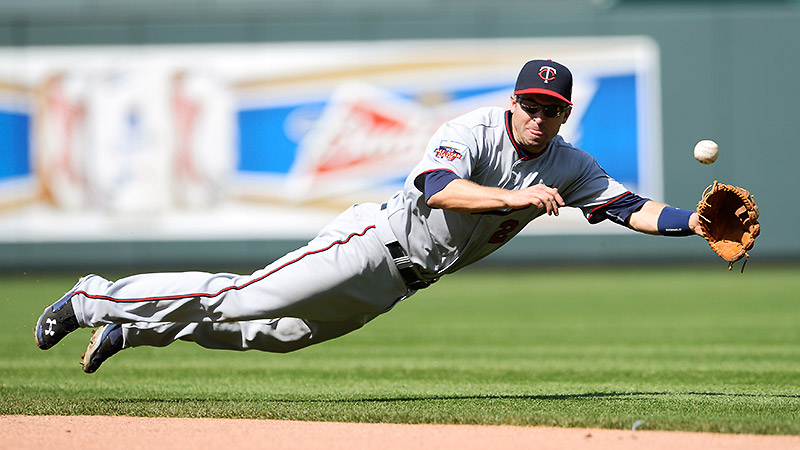 The thing to understand about Minnesota Twins second baseman Brian Dozier is that he’s extremely atypical. I can’t stress this enough, because if people fail to grasp it, they’re going to expect more players like him to come along, and that expectation, buzzing around like so many cicadas of ignorance, could ruin our ability to appreciate a player who has quietly become quite enjoyable to watch.

Dozier, who turns 27 next week, has scored 31 runs, tied for tops in the majors, and stolen 11 bases (in 12 attempts), tied for third in the majors. His eight home runs lead the Twins, though his 12 RBIs underscore the importance of having men on base when it’s time to hit. Dozier’s .240/.367/.446 batting line and daring baserunning — on Sunday, he caught Baltimore’s Manny Machado napping during a shift and took third base while the pitcher held the ball — might make familiar hairs stand on the back of your neck, because patience, power, and heads-up baserunning are the hallmarks of Chase Utley, Ian Kinsler, Jason Kipnis, and other standout second basemen.

While this season constitutes a small sample, Dozier had a pretty good 2013 as well: In 623 plate appearances he hit 18 home runs, stole 14 bases, and offset a low batting average with a high walk rate. In total, Dozier was almost exactly a league-average hitter worth somewhere in the neighborhood of three wins, depending on the WAR metric. And that’s pretty good.

Even more impressive is how Dozier breaks the recent mold of Twins second basemen, who have tended to be small, fast contact hitters like Luis Castillo, Luis Rivas, Alexi Casilla, and so on. The Twins have fielded a couple of great second basemen, including on-base machines like Chuck Knoblauch and Rod Carew. But as I sat down to write about Dozier, I couldn’t remember the last good power-hitting second baseman the Twins had employed. I booted up the Baseball-Reference.com Play Index, expecting to stumble upon Bucky Harris or someone equally ridiculous, but in fact, Dozier’s 18 homers last year demolished the franchise single-season record for home runs from the position, and Dozier’s .170 isolated power was the second-highest mark, behind Chuck Knoblauch’s .176 figure in 1996.

Even if Dozier’s start is something of a mirage, getting an average second baseman out of an eighth-round pick is a pretty nice piece of business for the Twins. So while I’m happy to see Dozier succeed, I’m anxious about what he represents. Scrappy middle infielders almost never blossom into good players in their late twenties, so while it’s nice to see something unexpected happen, I fear how this might alter fans’ expectations for the position as a whole.

Ordinarily, someone like Dozier would be a test case for why college success doesn’t always translate to professional success. He was selected in the eighth round of the 2009 draft following four years at the University of Southern Mississippi — his success with the Twins, as it happens, could begin to make amends for the damage fellow Southern Miss alum Brett Favre inflicted on Twin Cities sports fans — and then hit pretty well during his first three seasons in the minors. Of course, low minors stat lines for full-term college players are often deceiving because in rookie ball, for instance, the 22-year-old Dozier was playing against teenagers. Players who are consistently old for their minor league level almost always peter out in Double-A, Triple-A, or the majors, particularly if they’re 25 or 26 by the time they reach the big leagues.

Position players almost never take huge leaps after they turn 26, but there are no absolutes in baseball, and sometimes a guy who should’ve been written off years ago hits major league pitching better than he hit minor league pitching, despite having been older and more experienced than the minor league pitchers he’d faced at every level. Dozier’s 18 home runs last year, in one of the tougher hitter’s parks in the majors, were more than he’d hit in four years of minor league ball put together.

Four-year college players with pedestrian minor league records and bodies that wouldn’t look out of place on a high school team tend not to improve out of nowhere and set home run records. But there are always exceptions. Dozier turned into the player he is by living in the margin of error.

So, rather than looking at Dozier as a blueprint, it’s better to appreciate him for what he is now. Because every moment we spend looking for the next Brian Dozier is a moment we spend not enjoying the one right in front of us.