Brett Hundley, Jim Mora, and the Promise of Better Days at UCLA 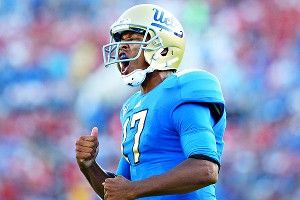 The drive to Pasadena from UCLA’s Westwood campus is about 20 miles, just far enough to show off the fast-changing topography of greater Los Angeles. The stadium is less than 25 miles from the Pacific Ocean, but aside from a few scattered palm trees, the large park that surrounds it feels more like a setting from somewhere further north and west. Finally, there’s the view to the north of the stadium, a mountain backdrop that I can only assume makes for one of the more idyllic scenes in college football.

The stadium itself is in a state of transition on its way to joining its ideal setting. The east sideline is home to a set of half-finished luxury suites with a price tag nearing $180 million. As Jonathan Franklin scored the game-sealing touchdown in UCLA’s 36-30 win over no. 16 Nebraska on Saturday night, and as chants of “U-C-L-A” filled the air, the contingent of Big Red near the north end zone shuffled toward the exit under an unlit tri-level collection of ladders and scaffolding.

Jim Mora was quick to dismiss the notion that a win over the 16th-ranked Huskers was in any way his program’s version of a similar transition. “What does this win mean?” he was asked in the Rose Bowl’s sparkling new interview room. “It means we’re 2-0.”

The first-year coach’s reluctance for excitement (not that he’s capable of it; Mora and cross-town rival Lane Kiffin have an eerily similar version of inflectionless, empty coach speak) would be understandable even without UCLA’s recent history of promising non-conference wins. With it, it’s practically mandatory. UCLA beat no. 21 Ohio State in 2001. It upset seventh-ranked Texas in 2010, and 18th-ranked Tennessee in 2008. The issue facing not only these Bruins, who are now the no. 22 team in the country, but Mora and the future of his program is whether this time is any different.

After a 2011 recruiting class ranked in the 40s, UCLA has assembled classes in or near the top 25 in both 2012 and 2013. Three of its starters on the offensive line are freshmen, as is the Bruins’ starting quarterback &#8212 the 19-year-old Brett Hundley, who looked excellent in a 21-for-33, four-touchdown performance. Hundley has about every trait a program-changing quarterback might have at central casting. Even from the podium, where he wore a pom-pom-topped UCLA ski hat on a September night in Los Angeles, his personality was evident.

On the other side of the ball, the defensive-minded Mora’s boys followed a first half in which they gave up more than 300 total yards with a second half in which the Huskers managed just two field goals. There were lapses early (like on Nebraska quarterback Taylor Martinez’s 92-yard run in the second quarter), but Mora’s imprint — a physical attitude and a willingness to swarm toward the ball — were evident throughout.

There’s no way to know what, if anything, beating a Nebraska team that’s been inconsistent under Bo Pelini actually does mean, but it’s clear that this season, the Bruins could at least provide a bit of respectability to the Pac-12 South. Hundley’s decision making was more mature on Saturday than it has any right to be at this point, but even when combined with his athleticism, he was far from the best player on the field for the Bruins. That honor goes to Franklin. The senior running back had 217 yards on 26 carries and added a 31-yard catch and run that was hard to believe when watched from field level.

Kiffin and the Trojans’ strongholds on the city and the conference are undeniable, but the long-held belief is that UCLA is the sort of place that should field a program better than it’s been. With the school’s alumni base, location, and resources, it seems like the Bruins are only a few willing and able parties from making that a reality. A shiny new set of high-priced seats and a coach with an expectation for nights like Saturday may be the start.

Filed Under: UCLA, We Went there