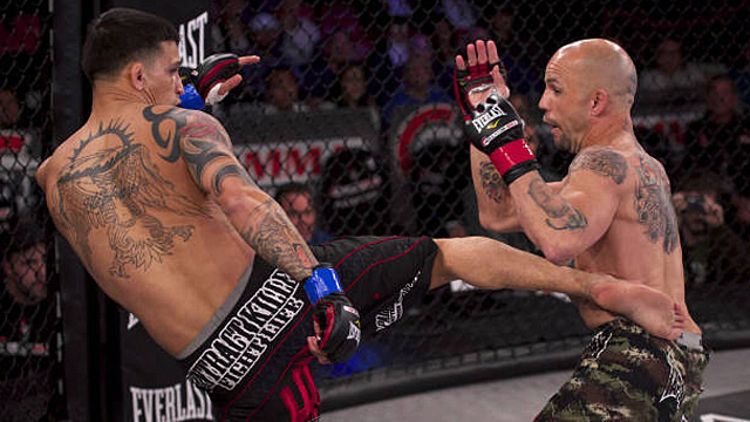 For the combat sports fan, it’s all about maintaining focus. We attend live events, watch other shows at home, then program our DVRs to bridge the gaps. We listen to industry podcasts, check Twitter feeds, patrol various blogs, and maybe even leave some time for the Shin-Kicking Championships.

In most circles, “mixed martial arts” really means “UFC.” Blessed with the most dominant fighters as well as global reach, Dana White and the Fertitta Brothers became MMA’s version of Bartertown’s Master Blaster a long time ago. So why consider rubbernecking on an MMA highway littered with dismantled acquisitions and the footnotes of failed organizations? Because Viacom didn’t pay a reported $50 million for a majority stake in Bellator MMA just to own the logo rights to a Roman gladiator stricken with Bell’s palsy.

A little background: After UFC ditched Spike TV for Fox in 2011, taking the Ultimate Fighter series with it, Viacom invested in Bellator, hoping to launch its own successful series and have an ownership stake in it. Dubbed Fight Master, episodes commence this summer as a complement to fights already airing on Spike most Thursdays.

Cross-pollinating a reality show with established talent has undoubtedly raised Bellator’s profile. That’s why UFC legend Randy Couture, along with MMA pioneer Frank Shamrock and esteemed trainer Greg Jackson, were signed as three of Fight Master‘s coaches, giving the future series immediate credibility. MMA Payout reports that Bellator’s MMA live shows generated respectable ratings on Spike, averaging about 740,000 viewers (that climbs above one million with replay numbers included). I watched a few Bellator events on Spike and came away impressed; the shows were polished and the quality of the fights was surprisingly good. The Newport Beach–based promotion has its stars, such as current titleholders Michael Chandler and Ben “Funky” Askren, but champions lie in wait for winners of the eight-person tournaments. That’s the key for Bellator CEO Bjorn Rebney: merit-based champions.

To familiarize newcomers, Spike uses well-crafted vignettes to introduce fighters during its broadcasts and continually updates brackets of each weight class to keep viewers invested in the tournaments. It’s tricky to fill out a bracket without fighters named Duke, Kansas, or even Gabriel Gonzaga (he’s with the UFC), but eventually you make do. And Bellator’s free fight app provides users with quick access to fighter profiles as well as real-time fight statistics. Early reviews have been positive, especially from judges who have cited the saved data on total strikes as “invaluable.”

But what’s the true test of fight promoters? Their ability to execute a live show without help from camera tricks or fancy on-air editing. That’s why I trekked to the Pechanga Resort & Casino in Temecula, California, to give Bellator 92 a test drive. Temecula, loosely meaning “place of sun” (it rained both days I was there), is just an hour southeast from Bellator’s corporate offices and a welcome respite for employees crisscrossing the country for weekly shows. Bellator’s presence was easy to spot on fight day, from event staff wandering though the food courts to a small armada of 18-wheelers and mobile satellite dishes at the rear of the casino. Two ambulances were stationed at an exit door as a precautionary measure — one for the fighters and the other for the chain-smoking gamblers hunched over slot machines.

Bellator’s crew transformed Pechanga’s grand ballroom into a bona fide arena: Bleachers were assembled for the back walls, large video screens were hoisted for enhanced viewing, and banners decorated the ceiling in honor of current champions. Bellator’s signature blue-and-red lighting rig glowed portentously above the circular cage at the room’s epicenter, leaving carpet floors as the only clue that a ballroom remained. You can always cut corners at smaller venues, but if Bellator did that, they sure fooled me. Unfortunately, the fighter’s entrance arch still looks like a retrofitted wedding arbor no matter where they deploy it.

The lobby was filled with MMA fanatics before the first bout, even if a few looked as if they had stumbled into the wrong line at a recruitment center. You could see iconic referees “Big” John McCarthy and Herb Dean strolling through the crowd, and even a few fighters dotting the hallway near the entrance doors. When light heavyweight Brandon Halsey entered the cage for the evening’s first preliminary bout against Rocky Ramirez (Halsey would win via arm-triangle choke in the third round), the man sitting next to me said in disbelief, “I just saw that guy coming out of the bathroom a few minutes ago with his hands taped!”

The following fight between California featherweights Aaron “Blood Spiller” Miller and Shad Smith affirmed Bellator’s belief that local/intrastate talent will sell tickets and engage fans. (Miller had his own cheering section and eventually won by unanimous decision.) When the main card was about to go live on Spike TV, ring announcer Michael Williams encouraged the crowd to make noise. (They obliged.) Williams is part auctioneer and part Nick Rails on Red Bull, someone Bellator is hoping becomes its answer to Bruce Buffer. His entertaining cadence makes you wonder if he asks to “pass the salt” with the same galvanizing aplomb.

Three featured elimination bouts between tournament survivors treated fans to both action and controversy: a third-round TKO by featherweight Frodo Khasbulaev, a split decision in favor of featherweight Mike Richman, and a confounding split-decision victory for middleweight Doug Marshall (who won despite losing every round to Sultan Aliev on one the judge’s scorecards). But it was middleweight Brett Cooper’s improbable third-round knockout of Dan Cramer that gave us our this-was-worth-every-penny moment.

Cooper struggled to escape Cramer’s prolonged mount position early, then descended further on scorecards after dining on a second-round buffet of brutal knees and fists. Both men landed stiff punches in the final frame before Cooper’s exhaustion-triggered autopilot stunned Cramer with an uppercut, then two right hands, before McCarthy rushed to intervene. The comeback finish brought everyone to their feet, left complete strangers high-fiving, and created the most deafening sound of the night. Like most of the evening, it exceeded my expectations.

Can this tournament format work for the long haul? Bellator believes that it’s the place “Where Title Shots Are Earned, Not Given.” You earn your way to the title in Bellator, or so it wants us to believe. If they’re insinuating that the UFC is guilty of dictatorial matchmaking, that’s only true to an extent — preferential treatment exists but it’s hardly crowning unwarranted champions. Yes, Stephan Bonnar’s (non-title) curtain call with Anderson Silva was a parting gift and Chael Sonnen might eventually talk his way into a title shot against Ronda Rousey, but these are outliers. Deserving UFC contenders eventually get their chance — even Johny Hendricks. It’s not like Dana White and Joe Silva are rigging matchups like Vince McMahon, or even Don King in his heyday.

The tournament format also presents its own set of problems, which is why UFC relies on discretion: Can you build a brand when titleholders are sometimes unavailable to bolster cards (outside of perplexing and inconsequential exhibitions), or when a compressed schedule offers challengers such little recovery time between bouts? For Bellator, and sport purists, results dictate opportunities. For the UFC, results matter, but flexibility matters just as much. Sometimes that means keeping fan-favorites fighting, or capitalizing on an easily hyped pairing. Clearly, there’s a case for both approaches. But that’s the thing — we know one works, and we don’t know about the other.

So why compare Bellator to the UFC? Because that’s what fans do. We weigh, contrast, and evaluate. And when it’s not a critique of promoters, it’s about the fighters or trainers. Spend too much time compartmentalizing, or making rigid alliances, and you might miss a bigger picture. Bellator might never attain the heights of the UFC, but for now, it’s putting on consistently good shows with an intriguing format and a growing pool of talent. Ultimately, that’s good for fighters and the future of the sport. And that’s good for fans, too … if they’ll take the time to watch.