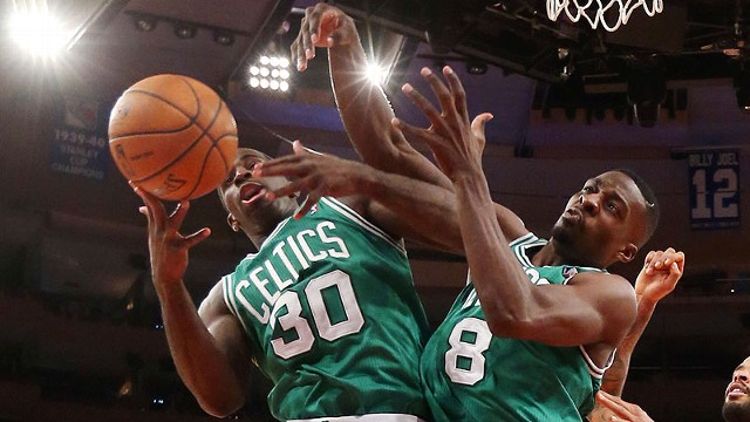 A 22-second summation of what the Boston Celtics face without Kevin Garnett for two weeks:

What that clip shows: A skinny wing player, Iman Shumpert, stealing a rebound from two Boston front-line players who have initial inside position on him. Those two Boston players are Brandon Bass and Jeff Green, and the Celtics have allowed 106.6 points per 100 possessions when they’ve shared the floor, per NBA.com. That would rank 25th overall for the season, which is a problem, since the Celtics as a team have actually allowed 99.8 points per 100 possessions — the sixth-stingiest mark in the league.

Of the 43 two-man player combinations that have logged at least 250 minutes this season for Boston, only the Courtney Lee–Chris Wilcox combo has been worse — and only by a smidgen, at 106.8 points allowed per 100 possessions in about 450 fewer minutes than the Green-Bass combo.

Boston understands the Green-Bass combination is a liability, which is why only one of Boston’s 14 most-used lineups features that pairing. Both have worked hard defensively in Boston, and Bass especially has shown improvement playing next to Garnett and within the system Tom Thibodeau left behind. Green’s improvement outside strategic one-on-one situations has been more sporadic, though he has clearly gotten more comfortable in Boston’s offense of late.

But neither finds defense easy or intuitive; complex help defense doesn’t come naturally to them, and you can catch both Bass and Green pausing mid-rotation or taking routes that are just a half-step or so more circuitous than need be. Neither protects the rim at all, which is why Raymond Felton so brazenly goes at the basket after Shumpert’s offensive rebound in the above clip. Both are below-average defensive rebounders for power forwards, and Green’s defensive rebounding rate has usually come in a hair below the league average for small forwards. Boston has rebounded just 70.9 percent of opponent misses when Bass and Green play together, a mark that would rank 28th in the league; Boston is a middle-of-the-pack team overall on the defensive glass, per NBA.com.

This is all bad news for Boston, which has no choice now but to toss the Green-Bass combo out there and use Chris Wilcox, another subpar defender and rebounder, as the team’s third big man. Shavlik Randolph and D.J. White are next on the depth chart, and though both seem like nice people (Randolph especially), if they are playing meaningful minutes for an NBA team, that team is in a bad state.

Garnett’s mysterious ankle/foot/whatever malady comes at an especially bad time for the Celtics, on a five-game losing streak and now just one game up on Milwaukee in the “race” for the no. 7 spot. The Bucks have already clinched the tiebreaker over Boston, so if the two teams finish with the same record, Boston gets Miami in the first round. Boston has a relatively easy remaining schedule, but so does every Eastern Conference team (it’s the East, after all), and the banged-up Cs still have three back-to-backs left.

And we’ve already heard predictable rumblings from the Celtics that Boston wouldn’t mind getting Miami in the first round, since anyone who wishes to win the Eastern Conference will have to dethrone Miami at some point. Some Boston fans have gone as far as to suggest Boston might “want” Miami, considering the intense rivalry between the two, and the fact that Boston has always given Miami a tough time. Boston won the regular-season series in Year 1 of LeBron before bowing out in a tough five-game series in which Rajon Rondo suffered an ugly elbow injury. They took Miami to seven games in Year 2 of LeBron, beat Miami head-to-head this season on the day the team learned Rondo had suffered an ACL tear, and nearly ended Miami’s current winning streak behind an outlier game from Green.

Boston clearly gives Miami some trouble. But the idea that Boston might “want” Miami in the first round, or at least not particularly care, is preposterous. News flash: Every Eastern Conference team wants to avoid Miami as long as possible. The only thing that could possibly change that reality is if Dwyane Wade’s knee acts up again sometime after his return to action tonight in Chicago, and if that flare-up raises a real possibility of Wade missing a game or two of the first round.

Otherwise, you do your damndest to work your way to the other side of the bracket and hope Miami suffers some sort of injury and/or fatigue issue before you run into them. There’s no way to predict or time injuries at this point in the season, but if the Heat are going into the first round healthy, any potential future opponent is better off giving time and luck a chance to work against Miami. Fatigue probably won’t become a factor for Miami, but this is a thin team playing its stars heavy minutes, and the Mavericks are convinced they managed to tucker out LeBron midway through the Finals by running him through a thicket of pick-and-rolls when the Heat had him guarding Jason Terry.

There’s also the fact that playoff wins mean something to every team and fan base, even one with 17 banners hanging from the rafters. A first-round win over a non-Miami team, even if followed by a Heat sweep, brings extra gate revenue, the satisfaction of joining a small club of teams to get so far, and valuable experience in the playoff hothouse for Green and Avery Bradley. Boston players and coaches can puff out their chests all they’d like, but anyone with a working brain cell would happily pass on the chance to win four in seven against a team that has won 27 games in a row — provided an alternative exists. It’s not hard to find an NBA executive who’d argue it would be better this season to snag the no. 6 or no. 7 seed in the Eastern Conference than a spot in the no. 4–no. 5 matchup on the Heat’s side of the bracket. (Whether that argument is itself an argument for reseeding is a topic for another day.)

Back to Green and Bass: It’s not all doom and gloom on this front for Boston. Much of the Green-Bass ugliness has come via lineups that have logged fewer than 25 minutes and feature players (Leandro Barbosa, Jared Sullinger) who won’t play again this season. The three most commonly used Bass-Green lineups all have positive scoring margins, though that’s mostly the result of unsustainable scoring numbers propping up predictably bad defensive numbers that fall in line with what we’d expect these Boston lineups to surrender. Even so, the most-used Green-Bass lineup — the new starting five, featuring Paul Pierce, Courtney Lee, and Avery Bradley — has done quite well on both ends of the floor in 99 minutes of play.

That lineup obviously doesn’t feature Garnett, and Boston’s defense once again has been a wreck without its anchor; Boston has surrendered an ultra-stingy 94.1 points per 100 possessions when Green and Garnett play together, while allowing an ugly 103.9 when Green plays without KG. The same general trend is true of the Green–Jason Terry combo that will see more time now. That pairing has survived with Garnett and collapsed without him.

But as John Schuhmann of NBA.com first noted on Twitter a few weeks back, Garnett’s life-or-death impact on Boston’s D mysteriously vanished upon the return of Avery Bradley. Since Bradley’s January 2 debut, Boston has been almost exactly as good defensively regardless of whether Garnett plays or sits, and they’ve been a bit better offensively, per NBA.com. That’s encouraging on the surface. So is the fact that Boston has functioned better this season when Green slides from small forward to power forward.

But the sample sizes are tiny, and years’ worth of evidence suggests Boston is in trouble without Garnett. And don’t overlook the absence of Courtney Lee, day-to-day with a sprained ankle. Lee is just an average player, but players who can bring “average” on both ends are valuable, and Lee’s injury has brought Boston to the point where it just doesn’t have enough average defensive players at any position. Without Lee, the Celtics have to increase minutes for both Jordan Crawford and Terrence Williams, and they cannot avoid pairing two minus perimeter defenders for extended stretches.

Terry is a heady defender who just doesn’t have the quickness and size to defend either guard position without falling a step behind or finding himself the victim of some bullying physicality; there’s a reason Boston has gone zone so often with Terry on the floor. Crawford tries hard in spurts, but he too often looks like a guy with no clue how to play NBA-level, five-guys-on-a-string defense. Watch him leave Pablo Prigioni wide open in the strongside corner for reasons only Crawford understands:

His first step is also shaky in one-on-one situations, and he has a tendency to play guys chest-to-chest on the perimeter, making it easy for them to blow right by him. The combination of bad perimeter defense and bad defensive rebounding is hard to overcome; watch all of New York’s 15 offensive rebounds from Tuesday’s game and you’ll see both aspects of Boston’s defense made equal contributions to the Knicks’ putback fest.

Boston needs to get its depth back to avoid being the no. 8 seed. Boston might not fear Miami, but no team should want the Heat right away if it could play the Knicks or Pacers instead. Duh.