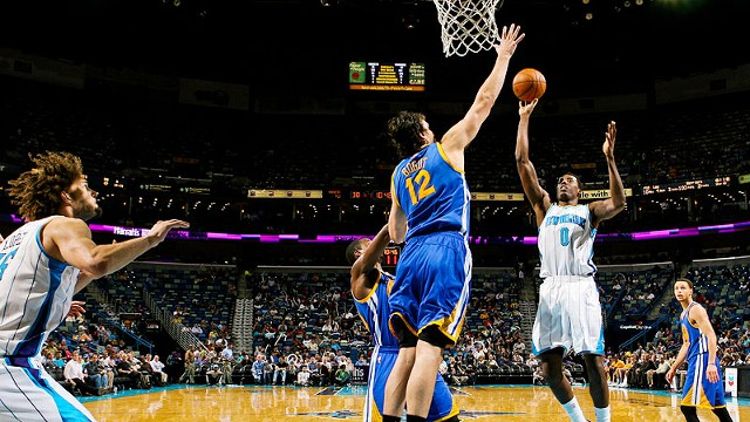 After a brutal six-game losing streak in early February put their playoff hopes in doubt, the Golden State Warriors have fared much better lately. The team has won eight of its last 12 games with a sterling point differential of +5.8 — a mark that would equate to a 57-win campaign if it held up over the course of a season. Golden State’s overall season mark is just +0.4, suggesting its real abilities lie somewhere closer to a .500 team, not one sitting 10 games above the break-even point. As ESPN’s Tom Haberstroh recently pointed out, point differential, not record, is a better indicator of future success. And that’s why this recent Warriors run is so intriguing.

Though they’ve faced a slate of middling opponents — their best wins have come at Houston and at home against Washington and the Lakers — a large part of this recent run can be attributed to the improving health of center Andrew Bogut. Since his gruesome elbow dislocation in the spring of 2010, the Australian center has been somewhat of a forgotten man. Far from productive during short-lived returns to the court, Bogut hadn’t been the defensive force he was emerging as three years ago in Milwaukee. Slowly but surely, however, Bogut has been recapturing his form, and the Warriors are reaping the benefits.

The team’s philosophy revolves around the concept of funneling the basketball toward either the sideline or baseline and away from the middle of the floor. In Bogut’s absence, that meant David Lee, Carl Landry, Andris Biedrins, and rookie Festus Ezeli were tasked with the vital role of containing, or discouraging, penetration. Though the Aussie still isn’t the shot-swatting, charge-taking player he was before his injuries, his presence provides a massive upgrade over Golden State’s alternatives, and the numbers — a nearly two-and-a-half-point improvement on defense with Bogut on the floor — bear that out.

Bogut is still rounding into form physically, but one area where he’s created a drastic improvement is in the team’s communication. Like a safety or middle linebacker organizing an NFL defense, Bogut is in an elite class — along with Tyson Chandler, Joakim Noah and Kevin Garnett — of back-line communicators. Bogut is constantly putting players in the right spots, issuing reminders, and calling out pick-and-roll coverages quickly so the on-ball defender can properly position himself or simply assure.

In the above clip, Bogut’s directions are audible even on TV. He first calls for Klay Thompson to “down” an apparent corner pick-and-roll, then keeps communicating to him after that initial threat is gone and the play turns into an isolation for Kobe Bryant. He follows by yelling “iso” to alert Thompson that he’s on an island and the post is open (meaning no player was trying to post up on the strong side). Bogut continues to talk throughout the play to remind Thompson he can funnel Bryant baseline, where the center can slide over and help. This type of information is vital and aids the Warriors in executing their defensive scheme well enough to eventually force a turnover.

Bogut’s main role is supposed to be anchoring the Warriors defense, but the team’s offense has actually gotten a bigger boost with his presence. During the past 12 games, the team has an offensive rating of 108.6 with Bogut on the floor — nearly five full points better than their season mark. It’s a slightly shocking number given how limited his offensive game is these days. Bogut never was an accurate outside shooter or a dynamic post scorer, and his patented lefty flip shots have found their mark less and less these days. But he’s still found a way to help Golden State improve its offense. Though his passing and offensive rebounding get the most attention, it’s the big man’s screening that pays the most dividends.

As more and more explosive players come into the league, setting good screens has become somewhat of a lost art. That is because the best screeners — Garnett, Nick Collison, and Kendrick Perkins — deftly toe the line between “good” and “illegal” screens. It isn’t that these players are inherently dirty (though many would argue KG is); it’s that their aggressive nature in freeing the ball handler often comes at the price of an offensive foul. The trick for them, however, is that like Bogut, they get away with far more illegal screens than are called.

As you can see in the clip above, Bogut, illegally, uses his ass to slow down Metta World Peace just enough to free Thompson for an open jumper. This type of ploy — also done with an elbow or a hip — is something Bogut does regularly in an attempt to free Golden State’s perimeter players. While you can argue whether it’s ethical, there is no denying it’s an unselfish and unheralded role that helps the team’s half-court offense despite Bogut’s (currently) limited skill set.

It will also play a vital role for the Warriors come playoff time. At the risk of oversimplifying things, the team’s offense is primarily based on three basic actions: Steph Curry coming off screens (on or off the ball), Klay Thompson using screens off the ball, and Jarrett Jack creating in the pick-and-roll. In the postseason — when transition points are scarce and every team knows their opponents base sets and counters, execution becomes paramount. Bogut’s ability to create pockets of space (particularly for Curry) could prove to be an invaluable skill.

If Bogut can continue to knock the rust off in upcoming weeks — particularly on defense — it will add yet another potential twist to an already highly anticipated Western Conference playoff bracket.