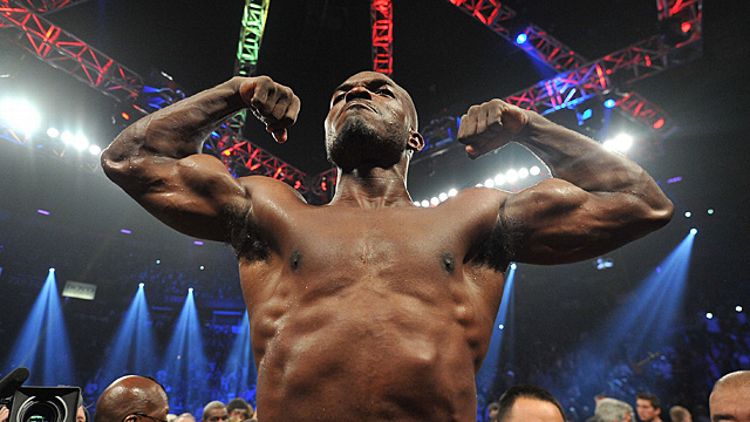 It felt like redemption, but why? On Saturday night, Timothy Bradley beat a 40-year-old Juan Manuel Marquez in a split-decision victory that frustrated and bored the overwhelmingly Mexican crowd at the Thomas & Mack Center in Las Vegas. The last time we saw Bradley, he was staggering around Southern California with what can only be described as an “ongoing concussion,” the result of several brutal blows to the head from Ruslan Provodnikov. But Bradley won that fight, again by close, debatable decision. Before that, Bradley was on the happy end of one of the worst decisions in recent memory when Duane Ford and the notorious C.J. Ross somehow deemed that he had beaten Manny Pacquiao. On the face, no boxer seems less deserving of redemption than Bradley. He has been in two pay-per-view fights in the past two years that have netted him nearly $10 million in purse money. He wins all his close decisions. So why, when Michael Buffer announced that Timothy Bradley was still the WBO welterweight champion of the world, did so many in boxing feel like Bradley had finally had his moment?

First, let me say what everyone says about Bradley: He’s a great guy. The cynic in me would argue that people say Bradley is a great guy because nobody knows what else to say about a dude from Palm Springs who can’t draw a crowd, but for once, I feel like that cynic is wrong. Bradley, by all accounts, is a genuine family man who tries to represent the sport in a classy, responsible manner. He does not get into stupid promotional games about “side pieces.” He does not throw money in the air and post Instagram photos from the back, back, back room at Spearmint Rhino. He shows a great deal of respect for a sport that so badly needs it, and even if this approach hasn’t won over many fight fans, he doesn’t show any real signs of dirtying himself. He is boxing’s Kurt Warner.

But story lines in boxing are rarely built on a fighter’s character. Redemption usually comes via knockout, as it did when Marquez knocked out Pacquiao after suffering through two controversial losses and a controversial draw; or when Roy Jones Jr. knocked out Montell Griffin in the first round of their 1997 rematch. But while Marquez’s win over Pacquiao last December should have provided some closure over who had won the first three fights, the knockout came with its own lingering questions. Where had Marquez, always a great finisher, but never a one-punch knockout guy, found such a sudden and dramatic reserve of power? Marquez had been my favorite fighter before he knocked out Pacquiao. After seeing his muscles-upon-muscles at the weigh-in, and how they might have ended Pacquiao’s career, my opinion changed. Every unbelievable feat of strength by a guy in his late 30s or early 40s now comes with a deserved measure of skepticism.

Marquez cannot be excluded from that calculus, and only made the suspicion worse when he engaged in a drug-testing shell game in the weeks leading up to Saturday night’s fight. Bradley wanted the tests to be administered by the Voluntary Anti-Doping Association, an organization that specializes in random testing for fighters. Marquez initially agreed, but then pulled out at the last minute and used his bully pulpit to bring in the Nevada Athletic Commission. This is roughly akin to allowing Luther Campbell to administer the SAT tests for all incoming Miami football freshmen.

Bradley, because he was the B-side of the fight, had no choice but to acquiesce to Marquez’s demands. In an interview with USA Today, Bradley said, “Top Rank is … spending a massive amount of money promoting this fight. HBO is promoting this fight. Everyone has a hand in this fight. At the last minute, [if] I decide [to bail] because he doesn’t agree to the drug testing, I’ll piss off my promoter, they’ll probably not extend my contract. I’ll piss off HBO, so they’ll say we don’t have another date for Tim Bradley this year. Then there’s no business for me.”

On Saturday night, Marquez came into the ring looking like the video-game version of his younger self. This time, though, the age and the muscles seemed to slow him down. He was routinely late on his counterpunches (although, to be fair, the same could be said about 99 percent of the counters he threw against Pacquiao) and could not figure out Bradley’s constant movement and quick jab. The fight had no discernible pattern, nor did it have any truly memorable exchanges until the last 10 seconds of the 12th round, when Bradley almost knocked Marquez down on his ass with an accurate, if not so vicious, left hook. I watched the fight on television and scored it 117-111 for Bradley. Counterpunchers are particularly difficult to judge without the benefit of sound and your own two eyes, so while I thought Bradley won clearly, I would defer to the cards of the media members who sat ringside, most of whom scored the fight much more closely.

Bradley’s victory felt like redemption, in part, because fight fans, who are overwhelmingly dedicated, nerdy, and passionate, and fighters alike have grown tired of all the bullshit in boxing. Just a couple of weeks ago, we watched a bloated Julio Cesar Chavez make a mockery of professionalism in the sport when he decided to change the weight limit of his bout against Brian Vera to “whatever.” When Chavez took home a wide-margin, unanimous decision victory in a fight many thought Vera had clearly won (I had it as a draw), the chorus of boos, which hadn’t had the chance to die down after Ross’s 114-114 scorecard from the Mayweather-Canelo fight, rose to a fever pitch. For once, it was nice to see the guy who was the smaller draw, who outboxed his opponent, and who has been ambassador for both clean living and clean sport, come up with the victory.

About Last Weekend: Patriots Save Best for Last