Bobby Abreu, the Phillies, and Learning to Find Joy in Dark Places 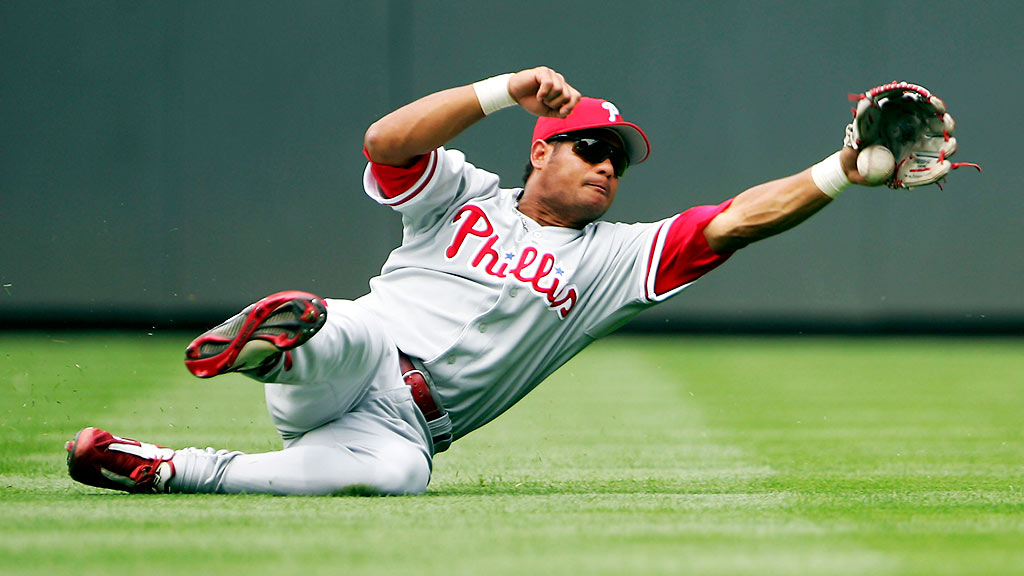 If you can’t be good, at least be entertaining.

The Philadelphia Phillies certainly aren’t going to be good in 2014. They won 73 games last year, but their run differential says they should have won 66. They boast two former MVPs, a former All-Star catcher, and the best second baseman of his generation, but all will be 34 or older this year and in various states of decline. Cole Hamels and Cliff Lee make up one of the top starting pitching tandems in the game, but both have a history, like Mellish in Saving Private Ryan, of meeting grotesque and horrifying ends when the help never shows up.

The Phillies are going to lose often and in ugly fashion, and while an exciting young player can make a bad team worth watching — see last year’s Miami Marlins — there’s no such player anywhere in Philly’s farm system.

Which is why Bobby Abreu is such an exciting acquisition. Abreu, who did not play in the majors in 2013, has been tearing up the Venezuelan Winter League so severely that Phillies GM Ruben Amaro offered him a minor league deal with a spring training invitation.

Abreu is so old that his GM used to be his backup. The soon-to-be 40-year-old will probably show up fat, far from the rifle-armed, 30-steal guy he used to be, and practically unable to play the outfield — which is to say the Phillies could stick Abreu in a corner outfield spot instead of Domonic Brown or Darin Ruf and nobody would notice.

Abreu is entertaining, though. ESPN’s Dan Szymborski pointed out Tuesday that Abreu has been a two-win player more recently than Ryan Howard. Comcast SportsNet’s Corey Seidman noted that the .350 OBP Abreu posted in 2012 would have led the Phillies last year, which is a whole different kind of macabre.

Abreu got a reputation for being lazy, moody, and soft during his first go-round with the Phillies, back when Tomas de Torquemada was the lead columnist for the Daily News. In his later days, however, Abreu has evolved into something of a jovial, carefree figure, like a caddish uncle.

Then there’s the nostalgia factor. Here’s a statement that’s both controversial and objectively true: In the 20 years or so between Mike Schmidt’s prime and Chase Utley’s, Abreu was the best player the Phillies had. From 1998 to 2006, Abreu averaged 157 games, 22 home runs, 29 stolen bases, and a slash line of .305/.416/.513, good for 5.4 WAR. Since the dead ball era, he’s the Phillies’ all-time leader in OBP. If Roy Halladay and Jim Thome deserved victory laps in Philadelphia, so does Abreu.

Abreu’s not going to put the Phillies over the top, but neither would Mike Trout. In a season that’s going to be full of Howard going 0-for-4 with three strikeouts, though, it’ll be nice to have an excuse to bring up Abreu’s .335/.446/.549 line from 1999 or his 151 OPS+ from 2002, one of two seasons in which a non–first baseman has generated that much offense for the Phillies since Schmidt retired. It’ll be nice for the Phillies to have a hitter who can take a damn walk for a change.

And it comes at next to no cost. If Abreu shows up to Clearwater with a beer gut and hits .050 in the Grapefruit League, the team can cut him. If he can still play, though, he’ll displace Ruf or John Mayberry. Ruf should be playing first base and Mayberry should be playing for another team, and they would be, if the Phillies weren’t changing the franchise’s name to “the Philadelphia Good Money After Bad.”

The Phillies can’t be good in 2014. And while Abreu may not push the needle all the way to “entertaining” on his own, he at least bumps it off of “Dickensian.”