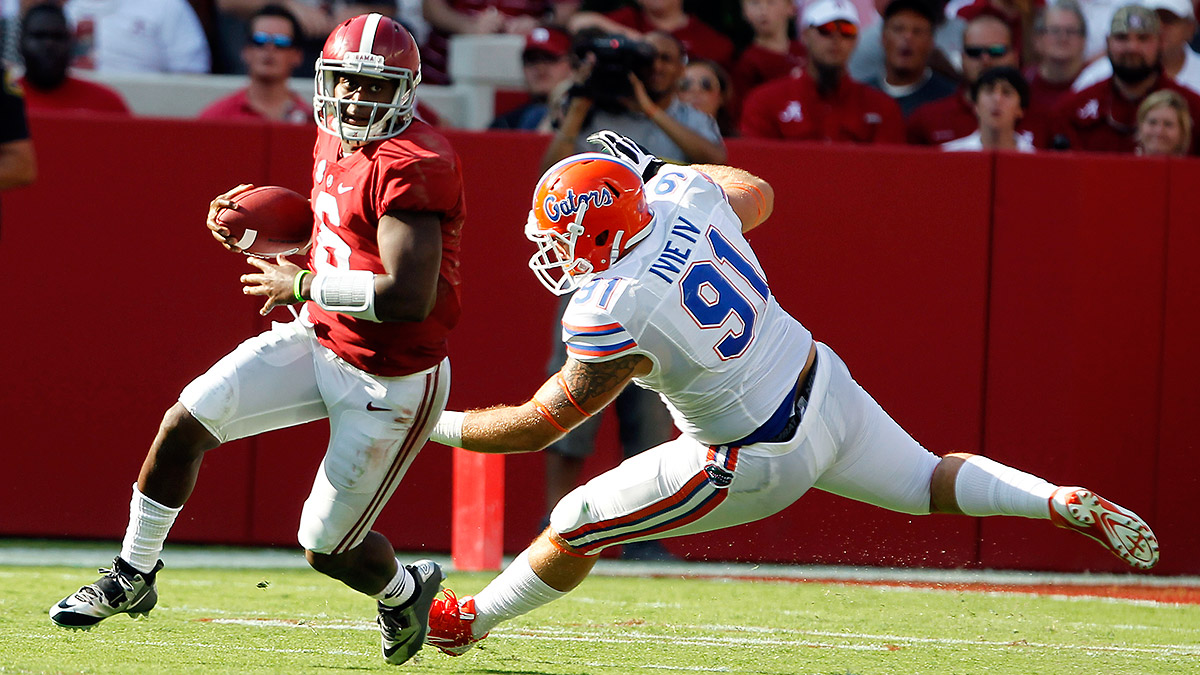 In August, I wrote about some of the standing assumptions that surround the starting quarterback at Alabama, and one of the most important assumptions at the time was that the nod for 2014 would go to Jacob Coker. A 6-foot-5, 230-pound prototype from Mobile, Coker had just arrived in Tuscaloosa by way of Florida State, and he looked like the latest in the long line of homegrown, floppy-haired bros who’d occupied the position for most of recent memory. He also found an urgent void at the top of the depth chart, with none of the holdovers from 2013 having managed to take the reins in the spring.

From that vantage point, it was hard to see how Blake Sims fit the typical Bama template at all. Although the fifth-year senior was, in the words of his school bio, “an exciting athlete,”1 he’d yet to attempt a meaningful collegiate pass — as AJ McCarron’s backup, Sims had been relegated to garbage-time appearances — and had been deployed far more often as a runner; he’d even spent some time earlier in his career listed, officially, as a running back. At 6-0, 208 pounds, Sims is built like a running back, and his performance as the de facto starting quarterback in the spring game left observers feeling underwhelmed, to put it mildly. Plus, when was the last time Nick Saban, or any Alabama coach for that matter, opted for an “athlete” behind center over a conventional, pro-style caretaker?

Yet it was Sims who got the nod in the Crimson Tide’s season-opening win over West Virginia, relegating Coker to backup duty, and as the season has unfolded, the former running back has emerged as the most efficient passer in the SEC. In fact, through eight games, Sims is on pace for the most prolific passing season in school history: Bama has attempted more passes per game in 2014 than in any previous season under Saban, for more yards per attempt, more yards per completion, and more yards per game, as well as for a better overall efficiency rating than in any season except 2012. At various points the offense has flirted with the no-huddle against WVU, rewritten the record book against Florida, and outgained Texas A&M by almost 400 yards in the first half alone. Sims has looked increasingly comfortable not just as a “game manager,” the double-edged label applied almost reflexively to his predecessors, but as a bona fide playmaker.

Still, he has yet to take a snap in November, and in the grand scheme of things — where Alabama quarterbacks are remembered as champions, or barely remembered at all — the turning of the calendar means the Tide’s season is only just beginning. After sitting out last weekend on a bye, the rest of the month is a defining gantlet that will pit Bama against no. 16 LSU, no. 1 Mississippi State, and no. 3 Auburn in the next four weeks. Unlike the last three years, when the Crimson Tide hit the stretch with an unblemished record and a no. 1 ranking, this time there is no margin for error. With one strike against them already, a 23-17 loss at Ole Miss on October 4, the Tide’s playoff ambitions can’t survive another. And if he stands any chance of adding his name to the short list of revered Bama quarterbacks in his only season on the job, neither can Sims.

As anyone who has watched Alabama over the years can attest, the conservative, cloud-of-dust reputation that has been affixed to the offense for generations often feels truer under Saban than it actually is. The Crimson Tide have averaged at least 30 points per game in each of the past six seasons after failing to do so since 1983; the only three 3,000-yard passing seasons in school history have come in the past four years. And the playbook under first-year offensive coordinator Lane Kiffin has been more flexible than ever, ranging from traditional, run-based formations to empty-backfield looks like the one that produced an 87-yard touchdown pass against Florida on Bama’s first play from scrimmage.

After that game (a 42-21 decision that would have been far more lopsided if not for three Alabama turnovers that led to all three Florida touchdowns), Kiffin was hailed as a kind of reborn offensive savant dragging a unit that Saban himself had described as “dinosaur age” into the 21st century. Alabama ran 87 plays against the Gators, most in the Saban era, and Sims finished with 445 yards and four passing touchdowns. The five-wide set on the first touchdown pass wasn’t a one-time gimmick.

Page for page, though, Kiffin’s playbook has probably had to evolve more to accommodate the existing structure at Alabama than vice versa. The philosophy still revolves primarily around two big, old-school workhorses, T.J. Yeldon and Derrick Henry, who have split carries more or less evenly on an identical average of 5.2 yards per carry. The passing game, as it always has in the past, remains heavily invested in play-action, especially on first down, when Alabama still runs 60 percent of the time.

For example, Sims’s second touchdown pass against Florida, a 79-yard bomb to Amari Cooper, resembled his first TD only in the box score; this time on first-and-10, Bama lined up with a fullback and a tight end — a combination verging on extinction — and occupied the safeties with a play fake. Cooper also scored from 80 yards out against Tennessee on a nifty little bootleg pass (also on first-and-10) that only required Sims to get the ball back to the line of scrimmage; Cooper took it from there. The Crimson Tide’s only big play against Arkansas was a quick play-action dump to tight end O.J. Howard that covered 47 yards, twice the distance of any other play in that game. The big passing plays have been a little bigger in 2014 (Sims leads the nation in yards per attempt and has connected on 10 passes that gained at least 40 yards, most in the SEC), but they still owe a debt to Kiffin’s insistence2 on establishing the run.

In keeping with the run-to-set-up-the-pass theme, it hardly seems like a coincidence that the two games in which Sims has struggled the most as a passer — and in which the offense as a whole has retreated into its stereotypically risk-averse shell — are also the ones that saw the Bama run game virtually ground to a halt. In the loss to Ole Miss, the Crimson Tide were held to 3.8 yards per carry while Sims finished with a season-low 116.6 efficiency rating; Alabama managed a single offensive touchdown and just three points after halftime. The following week, Arkansas held the Tide to just 2.1 yards per carry, Bama’s worst effort on the ground since a 2010 loss to South Carolina, while Sims passed for a season-low 161 yards in a sobering, 14-13 escape decided by a blocked extra point. Midway through the season, the offense was beginning to resemble the worst-case scenarios from the preseason, pedestrian signal-caller and all.

But that was a false alarm: Alabama won its next two games by a combined score of 93-20, effectively driving the dagger in both Texas A&M and Tennessee early in the second quarter. It was also in those two games that Sims began to break the mold of his predecessors and embrace his dual-threat potential. The wins over the Aggies and Volunteers saw Sims’s two best designed runs of the season, by far, the first one coming on a juking, 43-yard trek through the A&M secondary that frankly owed a lot more to the jukes than to the design:

Sims followed that up with a 28-yard scoring run against Tennessee, also on a straightforward zone read, that offered the best example we have to date of his straight-line speed:

It took a little while to emerge, but if the trend holds, the single biggest difference between the system McCarron ran last year and the system Sims will be running down the stretch is the latter’s willingness to exploit the quarterback as a threat to run. True, the zone read didn’t arrive with Kiffin; Sims occasionally kept the ball on similar plays as a backup before this season. Obviously, though, opposing defenses never had to spend much time in the game plan accounting for the prospect of McCarron or Greg McElroy pulling the ball out of a running back’s gut and keeping it himself.3 With Sims, they have no choice. Merely the threat of a quarterback who can take it the distance changes the calculations a defense has to make on a down-by-down basis, and for the first time in a very long time, Alabama has one.

Many pixels have been spilled over Saban’s embittered stance toward up-tempo, spread offenses, and the ostensible difficulty his defense has had in stopping them. But the team that has given Bama the most trouble over the years is the one built in Bama’s own image: LSU. Before last season’s game, a 38-17 Alabama win in Tuscaloosa, the Crimson Tide had split their previous six regular-season games against the Tigers by a combined margin of 32 points. (In both 2011 and 2012, Alabama rolled into the LSU game having won its first eight by an average of 32 points, and both of those collisions came down to the final play.) Les Miles is the only coach in that span to beat Saban twice in a row, or twice, period. On some level, it’s fun to savor the image of a freewheeling idiot savant triumphing o’er the cold, pattern-reading machinery of the assembly line. Really, though, it’s a case of two nearly identical rosters canceling each other out, blue chip for blue chip.

This weekend won’t be Sims’s first venture into hostile territory as a starter, but winning at LSU is an ordeal of much greater magnitude than winning at Arkansas or even, given the current state of the Volunteers, at Tennessee. After McCarron’s game-winning drive in Baton Rouge in 2012, which saved an undefeated season at the end of the worst statistical night of his career, he went to the bench and collapsed into uncontrollable sobbing on national TV. Two weeks ago, Ole Miss quarterback Bo Wallace — like Sims, a fifth-year senior with the fate of a season on his shoulders — was visibly rattled in Tiger Stadium and saw his team’s unbeaten streak come to a deflating end. For Alabama, there are arguably more consequential tests waiting on the other side in Mississippi State and Auburn, but for either of those games to mean anything, LSU is a Rubicon the Crimson Tide must cross first.

Still, what we can say now that we couldn’t say in August is that Sims is more than capable of navigating those waters. By all indications, LSU is a vastly improved outfit from the one that was humiliated in September by Mississippi State and Auburn, but the Tigers are still a relatively green team with ongoing quarterback issues of their own. If the Sims who lit up Florida and Texas A&M is the Sims who shows up Saturday night, Alabama should have no problem dispatching whichever version of its rival it happens to encounter. The sky remains the limit. If not, the Crimson Tide’s playoff plans will likely be canceled until further notice, and the skeptics who wrote Sims off before he ever saw the starting lineup will be back in force.

10 NBA Lessons in 10 Days, Starring Boogie and the Sacramento Kings