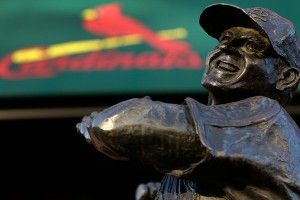 Stan Musial cranked more extra-base hits than anyone but Hank Aaron or Barry Bonds. He ripped more hits than all but Rose, Cobb, or Aaron and reached base more times than anyone but Rose, Bonds, Cobb, Rickey, or Yaz. He won seven batting titles (trailing only Cobb, Wagner, and Gwynn) and three MVPs (only Bonds won more).

Yet he holds no screaming records, owns no career-making signature moments that people will talk about 100 years from now. For a player who began his career the last time Ted Williams hit .400 and ended it with a single past rookie Reds second baseman Pete Rose, Musial gave us 22 years of nearly uninterrupted greatness, and a career that only a few others can match.

We’ll focus instead on the sheer force of Musial’s numbers. Even without 762 homers, 4,256 hits, or any other singularly iconic milestone, Musial’s résumé demands our attention. Putting aside the two most unlikely and most oft-cited facts of Musial’s career (1,815 hits at home and 1,815 hits on the road; and that Ken Griffey Jr. is merely the second-best left-handed hitter of all time born in Donora, Pennsylvania, on November 21), here are some of our favorite Musial facts (thanks to ESPN Stats & Info and Baseball-Reference):

As with any player, you can pick nits if you try hard enough. Musial played much of his career at a time when non-white players were extremely scarce in the majors. He spent most of his career playing in one of the highest-offense eras of all time. And Sportsman’s Park, his home stadium, was one of the friendliest in the league for hitters.

But Musial’s enduring image was his swing, the one that launched all those hits over all those years. It was a lunging, slashing attack on the ball, firing out of a crouch, sharply closed stance, his head peeking over his right shoulder “like a small boy looking around the corner to see if the cops were coming,” as Hall of Fame pitcher Ted Lyons described it. He wasn’t big for his era, and would rank as one of the smaller utility infielders in the league today, listed at 6-0, 175 pounds, but probably closer to 5-10 and a fair bit lighter after an August doubleheader in the searing St. Louis heat. But it’s hard to imagine many players ever generating more torque than Musial did. Watch him swing and you wonder how he doesn’t corkscrew himself into the ground, much less stretch more singles into doubles and triples than any other player in the game’s history.

Dodgers pitcher Preacher Roe was once asked how he would pitch to Musial. “I throw him four wide ones,” he cracked, “then try to pick him off first base.”

For as long as statistical analysis has existed in baseball, those who don’t wear uniforms have been the ones who’ve best wielded its power. Branch Rickey’s right-hand man, Allan Roth, was the first to delve deep into lefty/righty splits and how to take advantage of them. Bill James and Pete Palmer crafted many of the most influential studies that would eventually influence how rosters were constructed. Today, front-office names such as Billy Beane, Theo Epstein, and Andrew Friedman are most commonly linked to team-building through sabermetric principles.

The exception to this rule brought analytical concepts to major league dugouts 45 years ago, aggressively and unapologetically. He understood how to get the most out of limited players, handled pitching staffs masterfully, and above all, understood that no commodity is more precious to a team than the 27 outs they’re allotted each game. Earl Weaver’s legendary tirades always made for great copy. But with his passing at the age of 82, we should remember what he really was: one of the savviest managers in the history of the game.

The franchise was in just its fourth year of existence in Baltimore when Weaver punted his career as a pint-sized, talent-challenged second baseman to become a manager at the Double-A level. Orioles farm director Jim McLaughlin and assistant farm director Harry Dalton quickly realized the asset they had on their hands, and began entrusting Weaver to run workouts for minor leaguers, focusing heavily on fundamentals. Baltimore’s staunch commitment to player development and to sticking to their structured program came to be known as the Oriole Way, and Weaver was at the center of the movement. By the time Weaver got hired as Orioles manager in 1968, he’d already stamped his imprint on the organization, and also schooled many of the players who would later lead his big-league teams to glory. In his first three full seasons at the helm, Weaver’s Orioles won three AL pennants, and a World Series. They also averaged 106 wins a season; in the four-plus decades since, only five other teams have ever won that many games in one year. The O’s would add more AL East titles and an AL pennant under Weaver, with the skipper eventually retiring with 1,480 wins (22nd all time) and a .583 winning percentage that topped everyone but Joe McCarthy and John McGraw among the 30 winningest managers ever.

If you want a primer on how Weaver won all those games, or how your favorite team’s manager should be running his team, grab Weaver on Strategy immediately. Narrated by Weaver and crafted by veteran sportswriter Terry Pluto, the book reads like a stripped-down version of any Bill James tome. It’s a paean to Weaver’s three keys to winning — pitching, defense, and the three-run homer — and an assault on all the practices that can muck those up. Boldly outlined throughout the book are “Weaver’s Laws,” which succinctly sum up his core beliefs.

“Your most precious possessions on offense are your twenty-seven outs,” Weaver explains in his Fourth Law, before smacking down the idea of sacrifice bunts and excessive risk-taking on the basepaths. “If you play for one run, that’s all you’ll get,” he adds in his Fifth Law, an extension of the fourth. He talks of his love for four-man rotations (easier to find four good pitchers than five) and his hate for beanballs (why give the other team a free baserunner, and threaten a player’s livelihood to boot?). How should you groom a rookie pitcher? Stick him in long relief, explains Weaver’s Eighth Law, where he can ease into the big leagues without the pressures and heavy workload that come with a spot in the rotation. Weaver railed against 10-man pitching staffs because they limited the number of bench options a manager had — imagine how horrified he was late in life, seeing teams carry at least 12 arms, and often 13.

These weren’t just catchy mottoes either. Recognizing the value of on-base percentage, he’d use superior hitters like Ken Singleton to lead off instead of the banjo-hitting, batting-eye–challenged speedsters who led off for most other teams. He doled out playing time to otherwise forgettable players like Glenn Gulliver because they knew how to draw a walk. He bristled often against his own players, especially his pitchers (Hall of Famer and longtime staff ace Jim Palmer once sneered that “the only thing Earl knows about a curveball is he couldn’t hit it,”) but he got the most out of them anyway, including a 1971 rotation that remains one of just two staffs ever to produce four 20-game winners. He’d hide players’ weaknesses brilliantly, getting huge mileage out of Mark Belanger’s all-world glove at shortstop, then push the right buttons to avoid overexposing him in high-leverage offensive situations. He turned ordinary players into world-beating platoons, including the year he coaxed a .320/.415/.602 line out of John Lowenstein and a .270/.392/.499 from Gary Roenicke by having them split the left-field job based on righty-lefty matchups. In every one of Weaver’s initial 15-season run managing the team, Baltimore drew more walks than their opponents, averaging a staggering 111-walk edge per year. And yes, in 10 of his 17 total seasons at the helm, the O’s finished among the top five teams in baseball for three-run homers. Athletes and coaches lend their names to all kinds of products. But the fact that Earl Weaver Baseball still ranks as one of the best computer baseball games of all time, with enough nuance to get a generation of baseball nerds to start 10- and 12-team leagues years before fantasy took off, probably shouldn’t be chalked up to mere coincidence.

But all right, we can’t leave without at least a small tip of the cap to Weaver’s on-field ferocity, and his amazing knack for profanity. Only Bobby Cox and John McGraw topped Weaver’s career mark of 97 ejections. These weren’t your basic tossings for arguing balls and strikes either. Here’s Earl firing off a legendary string of F-bombs after getting tossed from a game:

Weaver never compromised in his managing style, sticking to those basic tenets all the way to the end. Watch him manage a game, and you were seeing Moneyball in action, decades before Moneyball ever came to be. Or as the Earl of Baltimore so eloquently put it in one of those Manager’s Corner outtakes:

“Team speed for christ’s sakes. You get fucking goddamn little fleas on the fucking bases, gettin’ picked off, tryin’ to steal, gettin’ thrown out, takin’ runs away from you. Get them big cocksuckers that can hit the fucking ball out of the ballpark and you can’t make any goddamn mistakes.”