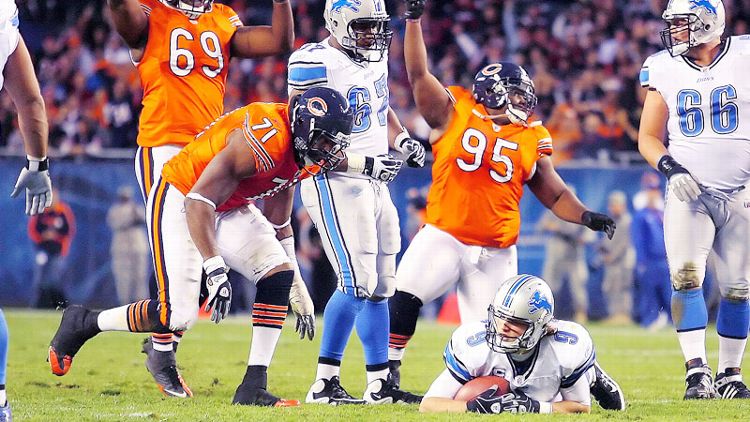 Ryan Pickspatrick threw three picks, had only 146 yards passing, led the Bills to a 37-point loss in Dallas, and didn’t even make the BQBL Top Three Scorers this week.

Week 10 the competition between stiffs was, well, stiff (never too early in the scorecard for a hacky joke). Curtis TAINTer was benched for the second consecutive week, Josh Freeman was benched, Tim Tebow completed only two passes the entire game, and Matthew Stafford tried to decapitate a man. That happened. After throwing an interception, Matthew Stafford tried to remove D.J. Moore’s head from his shoulders. As you can imagine, it didn’t go over well with Mr. Moore.

Title: “Soldiering On”
Time: 5:25 left in the third
Situation: Third-and-17
Freeman’s inner monologue: “Wow, we are in a bit of a pickle here down by 20 and looking at third-and-17. Good thing I have Kellen Winslow on my team, he will pick up the first down, that guy is a soldier. OK, we need 17 yards, why don’t I just throw it to Winslow in triple coverage 10 yards down the field and he will soldier his way through 700 pounds of defenders for those last seven yards right? Oh man, incomplete. Wait, why is Cushing running with the ball? Should I play it cool or try to tackle him? I’ll play it cool. That was incomplete right? Right? Why are the Texans so excited? Oh no.”
Johnson’s inner monologue: “They have orange Gatorade today? Awesome. I love orange Gatorade.”

Title: “Out route in a rout”
Time: 1:53 left in the third
Situation: First-and-10
Freeman’s inner monologue: “OK, we are only down 27 points with 17 minutes to play. Maybe a 4-yard out can really get this offense kick-started. Good thing I have so much time in the pocket to allow for my receiver to get open. Whoops, I guess I meant for McCain to jump the route and secure my second pick of the day. This game is really not going well. At least I am giving Cousin Sal plenty of material for Monday’s B.S. Report.”
Johnson’s inner monologue: “I can’t wait to hear Cousin Sal do his Freeman bit on the B.S. Report on Monday.”

Title: “Tip Drill”
Time: 8:15 left in the fourth
Situation: Second-and-10
Freeman’s inner monologue: “OK, plenty of time to throw, wide-open Arrelious Benn, this should be no problem. What? Arrelious, are you trying to catch the ball or set it so the Texans’ Quintin Demps can spike it over a net? I hope Josh Johnson’s helmet fits.”
Johnson’s inner monologue: “Time to see if my helmet fits.”

At this point in the game, 40 percent of the plays from scrimmage had resulted in interceptions. TAINTer and the Indianapolis Colts have not had the lead in a football game in five consecutive games. His completion percentage of 54.7 ranks him 32nd in the league. There are 32 teams. Colts coach Jim Caldwell is unsure if TAINTer will even start after the bye week. TAINTer has been so bad that he is about to be replaced by Dan Orlovsky, the man who started nine games for the 2008 Detroit Lions team that finished 0-16. If I was Orlovsky and Caldwell came to me and told me I was starting for the 0-10 Colts, I would look him right in the eye and say, “Oh, hell no. Is this some kind of joke? You want me to have my only career starts to be leading teams to winless seasons? Are you trying to win games or … oh, I see what you are doing here. If you want me to lose games, you have to double my salary or something, buddy.”

Detroit Lions (Matthew Stafford), 70 points: Matthew Stafford didn’t blame his four-interception, double-pick-six day in Chicago on his finger injury. He blamed it on the wind. Really, Matthew Stafford? It was windy in the windy city? Who would have thought? Was it the wind that blew your hands around the neck of D.J. Moore and forced you to try to Ichabod Crane the poor fella?

Denver Broncos (Tim Tebow), 50 points: Tim Tebow is the greatest quarterback in the history of the National Football League. The man is a leader, he’s a game manager, he’s a source of inspiration, he’s a reader of defenses, he’s a winner, he’s a miiiidniiight toker. Wait, sorry about that last one. Tim Tebow has won 75 percent of the games he has started this year, he also was incomplete on 75 percent of the passes he threw on Sunday. This sounds like a job for Glass Half-Full Guy and Glass Half-Empty Guy:

Glass Half-Full Guy: Tim Tebow was a champion in high school, a champion in college, and will soon be a champion in the NFL. There are only two stats that matter in the National Football League wins … and BQBL points. Every week, Tim Tebow finds a way to get them both. Oh, you know what else? Tim Tebow loves to fight through adversity. He loves to thrive when the deck is stacked against him. I bet you never even knew that he is just testing the limits of his God-given abilities and he is actually right-handed. You didn’t think that was how he really threw, right?

Philadelphia Eagles (Michael Vick), 39 points: This week it was Michael Vick’s turn to Romo the game away with a last-minute interception. The Eagles have now lost five games this season when they had the lead in the fourth quarter. God I hope this means more playing time for Vince Young.

Carolina Panthers (Cam Newton), 27 points: Remember the old Cam Newton? The one from September who threw for 400 yards two out of three games and looked like he was going to be the face of the NFL for the next decade? Anyone know where he is? He was so much fun to watch and so handsome. I miss that guy.

Jacksonville Jaguars (Blaine Gabbert), 27 points: There he is ladies and gentlemen, Yo Gabba Gabbert. Yo Gabba didn’t look that bad this week, but that had nothing to do with how well he played and had everything to do with how poorly TAINTer played. Gabbert has yet to throw for two touchdowns in one game in the National Football League and has thrown for more than 200 yards only once. Next week he faces Colt McCoy in the Battle of Quarterbacks Who We Thought Would Be Better Pros Based Entirely on Their Cool-Sounding Names.

Eds. Note: This post has been updated to remove a reference to Rex Grossman.