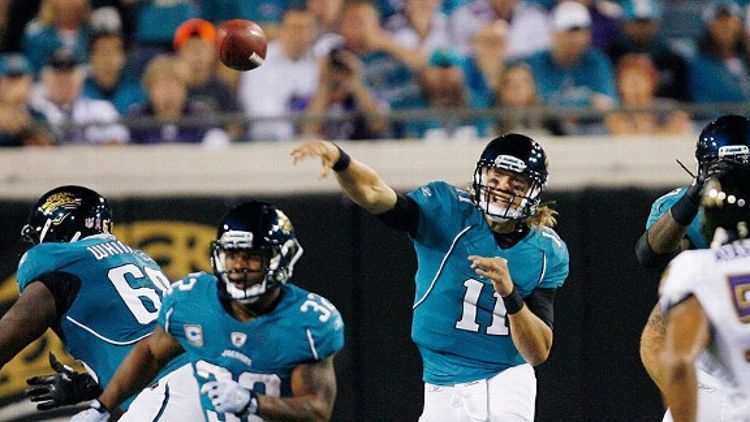 From time to time, we get e-mails about Grantland’s Bad Quarterback League. We read all of them, laugh at most of them, and make Jacoby write responses to a few of them. Here’s a look at what hit our inbox recently. (For the latest scorecard, click here.)

If you have a question for the BQBL, contact us at Triangle@Grantland.com.

Uhhh …. Einstein, Gabbert has only thrown “multiple interceptions” once in his NFL career. This past Sunday. Prior to that he had thrown just two in his first six games. Get a clue.

Jacoby: OK, how do I play this? Do I just haze this dude, or should I be all “Thanks so much for writing, great feedback, you’re totally right!”? I really want to haze this dude. There is so much haze-able stuff just sitting right there. I mean, “Einstein?” “Get a clue?” “Pinhead?” Robert either has the insult vocabulary of Biff from Back to the Future, or this is a huge double dice and the joke is back on me because since I have gotten all old, lame and gray, all the cool kids now talk like Ponyboy and Sodapop from The Outsiders. Most likely the latter.

Oh yeah, “Yo Gabba” Gabbert. Look at his stats. I could see how you could spin these numbers to make things seem more positive. In fact, Grantland has a resident Gabbert apologist. Take it away, Robert Mays:

Mays: “I’ve been on this kick since college (where I covered Blaine during his first season as a starter), and you know what, I’m not getting off it. I didn’t after I wrote an embarrassing story proclaiming him the next John Elway after his first college game (Seriously, it’s bad. Under no circumstances would I link to it, but the Internet isn’t difficult. Figure it out yourself.), and I won’t now. How good would Tom Brady be if he were throwing to Mike Thomas and a guy who got cut by the Rams? OK, still pretty good. But you get the point. The guy is a rookie quarterback with a coach who should’ve been fired three years ago, and worse wide receivers than Oklahoma. He’s got a huge arm, is mobile enough to keep plays alive and is really fucking good at swearing. C’mon. Let’s give Blaine a few more weeks. (This is getting really, really hard.)”

Before I go on my “I lost by 9 but should have won tirade,” I would like to tell you that my friends and I absolutely love this radical new fantasy league. I’m most likely mistaken here but if John Fox comes out from his mile high palace on Monday and says “Tim Tebow is our starting quarterback,” does this not constitute an official vote of confidence from the coach? During the waning minutes of the Steelers domination of those horrible Foxboroites, Tom Brady fumbled which was turned into safety as the ball was knocked out of the back of the end zone. The NFL didn’t count it as a fumble lost for Tom Brady, which I don’t really understand, but how does that not count as a safety toward him. Either of these two options would have propelled me to victory this week, which is why I’m slightly steamed at the moment. Again, I’m just a lowly football fan and don’t enjoy questioning the sports titans at Grantland, I was just curious.

Jacoby: Oh no, a real question about scoring and football and stuff? Stand by, let me put me serious face on. Here goes:

You make a great point, Brent. Seriously. Based on what happened at the end of that particular game, Brady deserved some BQBL points. However, what you are not considering is how that exact same result could have been the outcome of different circumstances that do not implicate Brady. Imagine an alternate universe where Patriots right tackle Sebastian Vollmer attempted to recover that fumble and run with it and then just batted it around and into the end zone, only to eventually get clobbered by Troy Polamalu — sending the ball flying out of the back of the end zone. In that alternate universe, Brady neither lost the fumble nor is the safety really his fault. Does that make sense, Brent? (Taking my serious face off now.) Also, in that alternate universe there are no mosquitos, no poverty, socks never get wet, all the women dance like Shakira and all the men are extremely polite. However, you still lose your BQBL game in both of them.

From Twitter user @ARFeigenbaum: @Jacoby_ Its a good thing I have you in my incredibly delayed posts league, asshole

Jacoby: This guy is the best. Here is how you properly insult somebody, “Pinhead” guy. It’s funny, I laughed out loud, and I retweeted it. It’s efficient — two insults in one tweet. And it’s effective. I immediately asked the intern who writes my columns to hurry up. Well done, dude who only uses Twitter once every kagillion days. Do you watch VH1’s Love & Hip Hop? I will fire this intern and replace him with you in a heartbeat.