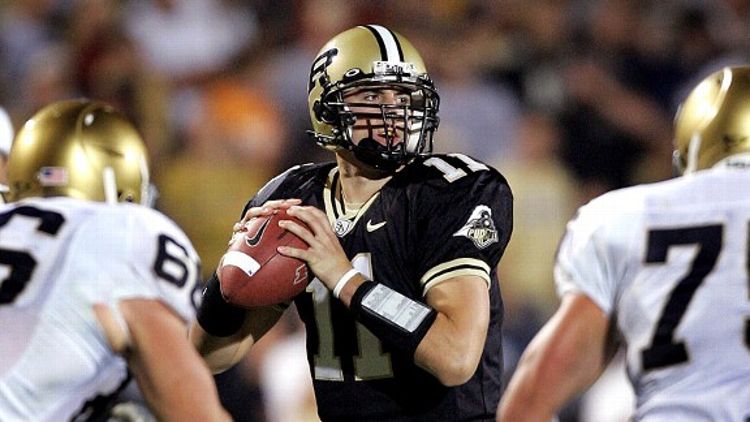 BQBLers have been e-mailing us a couple of times with feedback and questions. Every so often, I will be responding to them with hacky jokes and vague, unhelpful answers. Cool? Cool.

I was inspired by the e-mails that were posted on Grantland to send in my question to you. We had a situation last week where one of the league members did not select his two teams to start for the week. We debated on how to handle this, and ultimately decided to use his 2 lowest scores for the week. Was this ruling just and fair, or is there another system that should be in place for this type of egregious disrespect of the league?

Also, I wanted to share that since 7 of the 8 members of the league are Purdue graduates, we named our league after legendary back-up Purdue QB Brandon Kirsch. You may know him as Purdue’s starting QB between Kyle Orton and Curtis Painter. It seemed only fitting. Two games into Mr. Kirsch’s starting QB career at Purdue, the crowds started chanting “PUT IN PAIN-TER” whenever Kirsch would inevitably fuck up. In addition to naming the league after Brandon, we will also have a traveling trophy that will be awarded to the winner of the league. I just need to come up with a good way to incorporate the signed Brandon Kirsch NFL rookie card from the Bengals (picture attached) into a trophy. Any suggestions on that?

Thanks for the entertainment you provide me everyday over at the Triangle.

— Brian, owner of the last place Kordell “Slash” Stewart team in the BKBQBL

Jacoby: Thank you, Brian Moore, from Purdue. First off, here is your trophy, I know that it has nothing to do with bad quarterbacks, or your picture of Brandon Kirsch but it does have everything to do with being tremendous. Second, if someone in your league doesn’t select two teams to start that week, they forfeit. If they send in their starters 20 minutes late because they are hungover or something, that is 100 percent cool — but forgetting entirely is inexcusable. With a 59.2 QB rating, Brandon Kirsch has the look of a decent BQBL player himself. I will have to keep that in mind when we start the Grantland Arena Football Bad Quarterback League.

Tragedy struck my BQBL league this week… we had a tie. Ineptitude is a realm so massive that four quarterbacks can never truly be equally as bad… help me break this tie before I make up a random rule in my league that swings the result in favor of the guy who’s less of a douchebag.

Jacoby: Make up a rule and screw the guy you like less. Duh.

What do I do in the event of a tie for the BQBL? Do I just give them a tie, or is there some mechanism you suggest for breaking ties so that every game is a win/loss? Thanks!

Jacoby: See above. The official BQBL rules now states that the tie goes to the less douchey owner. Commissioner’s discretion. Also, can we officially retire the word “douchebag,” and all of its iterations? It was fun while it lasted, but the fun is over.

If it makes any difference, they both sucked. They each scored a total of 1 point this week, and had the two lowest scores in the league. I think they should both be given losses.

Jacoby: Zach, shouldn’t you be spending more time accruing credits toward your University of Iowa law degree and less time on your BQBL league? Yeah, that’s right, I Googled you. I know its creepy, and I don’t care. Actually, let me take that back, you should spend MORE time screwing over your friends and less time studying law. My bad, momentary lapse of being a jerk.