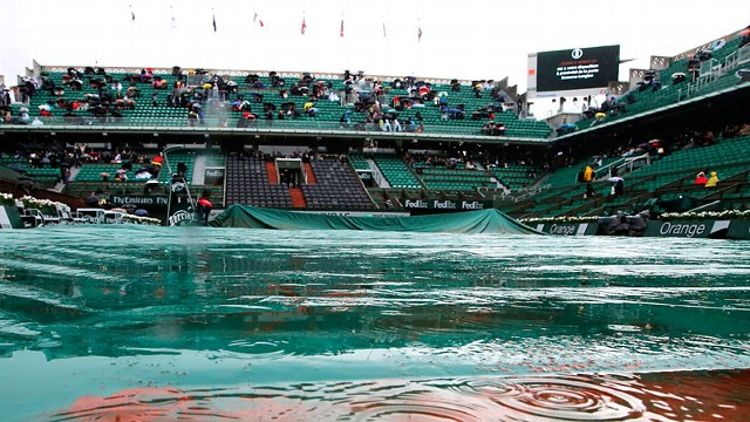 The color of the clay at Roland Garros is spray-tan orange. In French, it’s “terre-battue,” as in “beaten earth.” But after the court’s been combed and brushed, it’s basically a glorious patch of suede. When it rains, the suede turns to mud. And off and on for the opening two rounds of this year’s tournament it’s been raining — enough to interrupt play, enough to create some near misses between umbrellas and eyes, enough to make you very sad for the people in open-toe shoes. Their feet got an uneven tan.

On Tuesday, play didn’t start until well after one, which guaranteed backups on Wednesday. On Thursday, it barely got under way, which guaranteed backups on Friday. In the U.S., when there’s a rain delay at the French Open, you probably go back to sleep. Here, whether you’re the BBC broadcast team or one of the linespeople, you wait. If you’re a spectator, you pray. Those people you always see on television, huddled in the stands beneath an umbrella or slumped in a plastic poncho? Those people once seemed silly to me, but they’re fervent optimists. And eventually, their optimism produced a match in Court Philippe Chatrier, the tournament’s intimately scaled main theater, between Marion Bartoli and Olga Govortsova.

Bartoli is French, 28 years old, and ranked 13th in the world. She’s a strong but fitful player, famous, first, for making it to the 2007 Wimbledon final after finding inspiration in seeing Pierce Brosnan in the stands and, second, for being an on-court eccentric. Her racquet has an enormous face. She rocks back and forth when she serves. Between almost every point she bounces up and down and forcefully swings at the air. She expends enough energy for two matches (and her matches tend to last three sets). Add the facial animation of her father and coach, Walter, and you’ve got a comedy duo.

But Tuesday, the most important thing about Bartoli was that she’s French, and this country really, really would love someone local to win the title. These are boom times for French tennis. The top 100 on both the men’s and women’s sides are crowded with Francophone names. For the men, six of those names — Jo-Wilfried Tsonga, Richard Gasquet, Gilles Simon, Benoît Paire, Jérémy Chardy, and Julien Benneteau — are in the top 40. And Monday, the Frenchman Gaël Monfils, who was a top-10 player before a knee injury, upset the fifth seed, Tomas Berdych, in what’s been the match of the tournament so far.

Bartoli doesn’t play with Monfils’s kind of electricity. Often you wonder if she’s paid the utility bill, and then the lights come on. But she always seems to be digging herself out of holes. In part, this is because she tends to go for mental walks during matches. Govortsova, who’s a long, Minsk blonde, had no trouble finding the lines with whizzing backhand returns, but the match often seemed up to Bartoli, who grew testy with herself, snatching the balls the ball kids tossed her and grumbling. Yet at 6-5 in the third set, serving for the match, Bartoli threw up her right arm as if she’d just vanquished the Romans. In actuality, all she did was get to deuce. She wouldn’t manage to end the match for several more exasperating points. The crowd was clearly behind her, nonetheless, but with mild chagrin, the way you would be with a crazy aunt: She’s weird, but she’s ours.

If Philippe Chatrier is a warmly intimate stadium, Court Three is uncomfortably so. There are a few rows of bleachers on two sides and walls that people can peer over at either end. You’re right on top of the players. This is where Jack Sock was playing the Spaniard Guillermo Garcia-Lopez. Sock is a 20-year-old from Lincoln, Nebraska. He has the best name in almost any sport, is ranked 118th, and is built like a piece of farm equipment, specifically a horse. When I caught up with his first-round match, he’d already taken the first two sets. I stood at his end of the court, and when he charged toward one of Garcia-Lopez’s shots, I got nervous and backed up. That’s how intimate Court Three is: You could die. Sock is not a clay-court player, not ostensibly. He just hits the ball very, very hard, and he hits it fearlessly deep. I looked over Garcia-Lopez’s team at the end of one short exchange, and they seemed at a loss.

At 2-1 in the third set, the grounds crew asked for the tarp. It wasn’t raining, but a man with a walkie-talkie pointed at the darkening sky and went on with his business. Garcia-Lopez treated the delay like a firing-squad reprieve and hustled off the court. Sock took several minutes to pack up his things and wrap his mind around what had just happened. He was probably 15 minutes from a win. But they were right. Ninety seconds after Sock departed, a downpour began.

When play resumed, Sock’s shots had lost their bang and accuracy. The balls seemed heavier, too. Garcia-Lopez no longer had to panic. He had time to think. He must have been thinking about how to outhit Sock. Facing two break points, he whacked a couple of robust serves and eventually took the game. But his approach shots wouldn’t stay in, and his drop shots seemed to levitate. Sock won the match, 7-5 in the third. His reward is Tommy Haas, the German star with the work-of-art backhand, who’s ranked 14th and has become an object of sports-world sentiment. At 35, he’s practically a senior citizen.

The first Wednesday at Roland Garros is kids’ day. That apostrophe is crucial. They own the entire facility, and there isn’t much any one can do about their scurrying and screaming and elation. They make a lot of people feel young. They make others feel old. But, mostly, they make a lot of noise. (In the press conference after his second-round vanquishing of India’s Somdev Devvarman, Roger Federer said he used to hate kids’ day, but he’s come around.)

The kids of France had a ticket to paradise this year. Two of their heroes — Tsonga then Monfils (it’s “Mohn-FEECE”) — were scheduled back-to-back on Chatrier. Up against the fatless Finn veteran, Jarkko Nieminen, Tsonga gave the kids a show. (He always puts on a show, but his demonstrative approach to athletics appeals, especially, to children.) When Tsonga sprays a ball out, he puffs his cheeks and blows out the air. He shakes his head. He throws up his arms in mock despair. He runs hands along his faux-hawk. Oh, yeah: Tsonga still has a faux-hawk, which just makes him seem cool. They cheered him on: “Tson-ga! Clapclapclap! Tson-ga! Clapclapclap.” They’d scream: “Allez, Jo!” They kept that up for the match’s two hours. They whooped and taunted, some of them in tracksuits and hoodies. They were the Bugsy Malone of sports fanaticism.

Tsonga, being a showman, would give them whatever he had. But he didn’t need to. Nieminen didn’t offer much trouble. The Frenchman took the second set courtesy of a couple of volleys, and the crowd erupted with pride and happiness.

Monfils had the day’s tougher assignment: the uninhibited 24-year-old Latvian slugger Ernests Gulbis, who’s ranked 40th in the world but was once as high as 21. Gulbis made the quarterfinals here in 2008 and is the sort of player who, when he’s on and consistent, you can imagine perched at the top of the sport. He took the exciting first set in tiebreak, and that seemed to have the crowd worried. The kids whooped and cheered for Monfils, who found ways to absorb the power of Gulbis’s groundstrokes and return them at clever angles. Second set to Monfils.

Serving for the third set, Gulbis hit an overhead shot that Monfils tossed his racket toward as the ball flew into the stands. It missed, and yet the crowd gave Monfils an ovation for his effort anyway. Gulbis went on take the game, sending the outcome of the match into the sort of doubt that Monfils specializes in generating. The third set went to a tiebreaker, during which Monfils hit a drop shot that lit up the stadium and seemed to ruin Gulbis for the fourth set. He only won two games. Still, together, they played a superb clay-court match: long rallies, variety, daring shot-making, and dazzling court coverage. Monfils has already been on the court for more than seven hours. You hope he still has enough in the tank to go distance.

At the start of the third set of Monfils-Gulbis, I took a lunch break that sent me past mobs of boys and girls gathered outside the entrance to the players lounge. One great thing about having this many kids on the grounds of any non-kids event is that if you see enough gathered in one spot, it’s either for ice cream or news. Either way: Thank you.

In this case, they were waiting for Tsonga to finish his post-match press conference and exit the stadium. They got a bonus when Serena Williams headed into the fray and smiled through the gasps and murmurs. Her coach, Patrick Mouratoglou, who owns a famous tennis academy in a Paris suburb, actually came back out and posed for photos. Svetlana Kuznetsova emerged from the lounge and some boys peeled off after her. Then came Daniel Brands, the skyscraping German, who caused a minor stir. If he accomplishes nothing of significance in tennis (it seems unlikely), Brands will forever be famous as the guy who, on Monday, took a set off Rafael Nadal in the first round. To a lot of these kids, Brands was a god.

The wait for Tsonga went on long enough that some kids began to lose hope or interest. But other boys and girls just maneuvered past the people jamming the stairway and took their place. Then out came Gasquet, the seventh seed and a real sports star here. The pandemonium was very sweet. A swell of people no more than three-fourths his height pleaded for autographs and pictures. For about 10 minutes, he politely obliged. If Tsonga wanted to sneak out, Gasquet had created an ideal diversion. For all we knew, he had. After half an hour, no one had seen him. But the aura of enthusiasm persisted.

Game 5 Preview: Four Keys to the Most Important Night of the Season