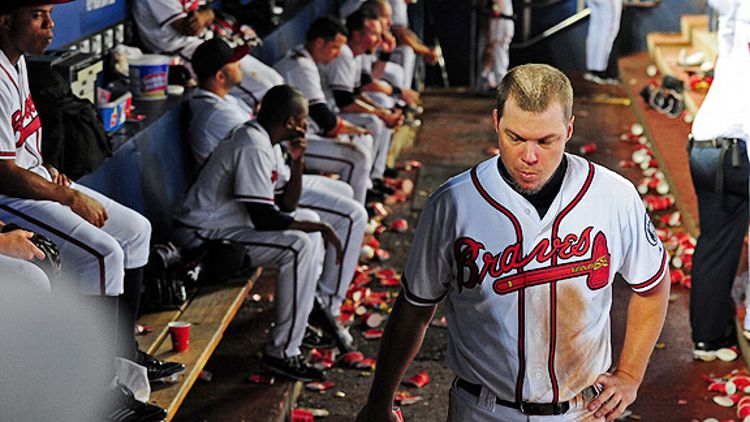 On September 1, the St. Louis Cardinals sat 8.5 games back in the wild-card chase. This morning, they wake up as wild-card champs, bound for Philly and a shot to keep the magic going.

The Cardinals’ 8-0 whitewash of Houston gave them 23 wins in their last 32 games of the season. They did it with starting pitching, led by the old warhorse Chris Carpenter. Knock the Astros’ anemic lineup all you want, but throwing a two-hit shutout with 11 strikeouts and no walks in a potential elimination game on the final day of the season is impressive stuff. The start capped an amazing closing kick for Carpenter, who went 4-1 with a 1.13 ERA and a 32-to-7 strikeout-to-walk rate in his last five starts of the year.

There was plenty of offense, befitting the highest-scoring team in the National League. Albert Pujols and Lance Berkman chipped in, capping a predictably strong season for Pujols and a big surprise year for Berkman. But the bit players also got involved, with more unlikely Nick Puntoisms and yet another homer for Allen Craig, whom ace Cardinals beat writer Derrick Goold calls the Replacement Killer.

And yes, it’s time to rethink the Colby Rasmus trade. Again. When the Cardinals dealt their five-tool (four-and-a-half-tool?) center fielder to Toronto at the deadline, the consensus was they were giving up the best player in the deal, someone whose future exploits could come back to haunt the Cards for years to come. That might still happen. But even the most jaded critics had to expect at least a small win-now benefit. St. Louis dumped three sub-replacement level relievers and added the very capable Octavio Dotel and Marc Rzepczynski, shoring up their biggest weakness, the bullpen. The Cardinals got Edwin Jackson, who did Edwin Jackson things, eating innings and keeping his team in the game through 12 stretch-run starts. Jon Jay gave the Cardinals adequate production in the final two months of the year, hitting .278/.318/.406; the guy he replaced, Rasmus, hit .177/.206/.323 during that same stretch.

The day the Cardinals made the deal, they stood a half-game out of first. Rasmus’ rift with Tony La Russa aside, this was a trade they hoped would propel them to an NL Central title. A monster streak by the Brewers prevented that. But they got a great consolation prize. No matter how Rasmus turns out, they’ll always have that.

For the Braves, there are only regrets.

There are the larger regrets, certainly. Every year, it seems, the Braves settle for not having a monster bat in the middle of the lineup. They stick to a strict budget imposed on them by Liberty Media (one of the few corporate owners left in the game) and hope that pitching and guile and timely hitting can be enough to see them through to October. Their big offseason splurge, Dan Uggla, put up one of the worst first halves ever seen by a hitter of his caliber, making the Braves quickly regret his $62 million contract. But there was also a huge drop-off season for Martin Prado, a replacement-level effort by Alex Gonzalez, a massive post-injury drop for Brian McCann, and a terribly disappointing season for the phenom, Jason Heyward. When Tommy Hanson and Jair Jurrjens hit the shelf, all of a sudden the Braves were left with a merely decent rotation, trying to pick up the pieces for a subpar offense.

Then there are the smaller, but more acute regrets.

Michael Bourn caught trying to steal third with nobody out. Dan Uggla sneaking a peek into right field, slowing him down just enough for Hunter Pence to throw him out at home.

Plays that don’t matter much when you have a lead. Nothing to fret about under normal circumstances.

But these were anything but normal circumstances. That lack of offense and downturn in starting pitching shoved the Braves to within one game of completing one of the worst September collapses in major league history.

They still could have overcome all of that, still could have forced a 163rd game … if not for one final meltdown by the bullpen. Everyone and their dog has broken down Fredi Gonzalez’s heavy usage of his top three relievers this season, how the Braves’ starters rarely made it deep into games (Tim Hudson’s start last night marked just the third time in a month that a Braves starter had pitched into the 7th) and how Jonny Venters and Craig Kimbrel’s performances nose-dived in September. Whether or not those factors were connected, Kimbrel had a chance to send Atlanta to a one-game playoff … and he failed. As ESPN’s Jayson Stark noted after Kimbrel’s 9th-inning walkathon fueled a game-tying Chase Utley sacrifice fly, Kimbrel yielded runs in just four of 61 appearances before giving up runs in four of his last eight.

The Braves didn’t quit afterwards, getting a sterling performance from Kris Medlen in relief of Kimbrel, just Medlen’s second appearance since coming back from Tommy John surgery. They got a couple of mini-rallies. But they couldn’t break through. When Pence dropped a 112-foot blooper into shallow right field with two outs in the 13th inning to score Brian Schnieder with the go-ahead run for the Phillies, it felt like the game, and the season, had already ended. When Freddie Freeman rapped into a double play 12 minutes later, both did.

The Red Sox took a shred of ignominy off the Braves’ hands, completing a slightly larger collapse in historic fashion. This won’t make anyone in Atlanta feel any better. The Braves had a postseason berth in their hands, they let it slip, and the deserving Cardinals seized it from them. They’ll have all winter to think about what might have been.