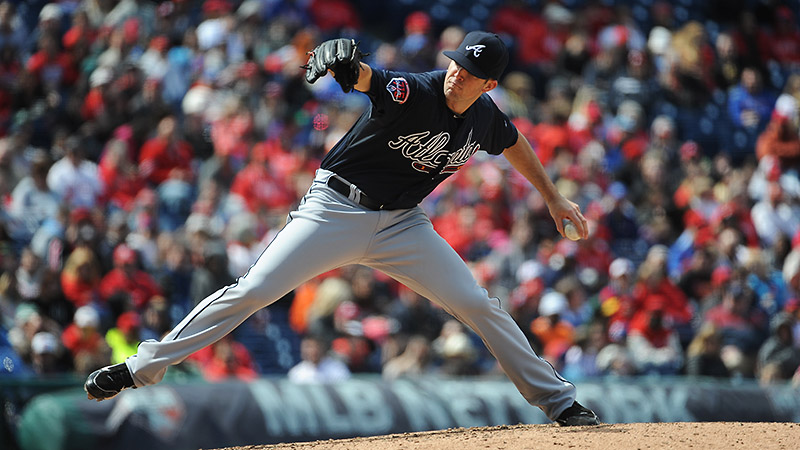 This spring, many prognosticators were scared off the Atlanta Braves following a rash of pitching injuries that knocked the team from its perch as NL East co-favorite or primary challenger. The thinking went something like this: Losing starters Kris Medlen and Brandon Beachy to Tommy John surgery in succession, like the Braves did, would be a stomach punch for any team, particularly one that had lost its top two setup men, Jonny Venters and Eric O’Flaherty, to elbow injuries less than 12 months before.

The thing is, we should have known better than to doubt the Braves, who’ve always managed to find enough pitching. You know how the Cardinals manage to win 90-plus games a year despite a middling payroll because they’ve discovered a pit mine somewhere in Oklahoma from which they harvest above-average ballplayers and pitchers with mid-90s fastballs like Saruman digging Uruk-hai out of the ground in The Fellowship of the Ring? Well, somewhere off I-75 between Atlanta and Savannah, there’s a farm where the Braves grow pitchers on trees, right next to the peaches. I don’t know how they do it, but that’s the only explanation I can think of for how the Braves seem to constantly find pitchers who are locally grown, humanely raised, and surprisingly good, much like that annoyingly expensive chicken my wife insists on buying.

Injuries happen to every team, and true top-end starters are rare, so even a front three as good as the Dodgers’ or Phillies’ isn’t good enough when Clayton Kershaw or Cole Hamels has to spend a month on the DL. (Though given the Phillies’ offense and bullpen, a front three of Steve Carlton, Greg Maddux, and Roger Clemens might not get them to .500.) Every team needs at least a couple of guys who can go out there and throw strikes for six innings without giving up 10 runs. Not necessarily guys who can go win games on their own, but guys who can at least keep the team in it. And that’s the kind of pitcher Braves GM Frank Wren, his development staff, and pitching coach Roger McDowell seem able to produce on demand.

Medlen pitched incredibly well in late 2012, and Julio Teheran has shown great potential, but it’s still hard to argue that the Braves are in the business of producing knockout ace–type starters. Instead, they’ve been able to squeeze the last bits of life out of aging former top-end starters. Last Friday, Aaron Harang flirted with a no-hitter for the second time this season; he currently boasts a 0.85 ERA and 0.88 WHIP. Last year, when the Braves needed pitching down the stretch, Freddy Garcia delivered three very good regular-season outings, then started an elimination game in the NLDS against Kershaw and left with the lead. The year before that, as hotshot youngsters Jair Jurrjens and Tommy Hanson imploded, the Braves got quality innings out of Ben Sheets and Livan Hernandez; not great innings, but enough to give the Braves a chance to win.

Then there are the fringe guys. On Tuesday, Alex Wood took one of the less fair losses of the season, delivering a four-hit, no-walk, 11-strikeout performance against Miami that would’ve been good enough to earn a win if Jose Fernandez hadn’t struck out 14 and allowed only three hits for the other side. Wood, who now sports a 1.54 ERA, threw 75 strikes in 101 pitches against the Marlins to deliver an extremely impressive outing, particularly for someone whose future as a starting pitcher is still very much in doubt.

Wood was a 2012 second-round pick out of the University of Georgia, which at the time was just about the only bad baseball program in the SEC. Since the Braves dominate scouting in their backyard, though, they wound up with a left-handed pitcher boasting a mid-90s fastball and a good changeup. Wood appeared to be a fast-rising prospect likely to dominate in the bullpen, but unlikely to start. The problem with Wood, now 23, is twofold: First, his slurve may or may not be good enough to serve as the third pitch starters pretty much need in order to survive in a rotation; second, his delivery isn’t as cringe-inducing as Chris Sale’s, but it still makes Wood look like a seasick marionette throwing a ball. He’s already blown out once, and while he could be a successful starter long term, he could also get hurt again; we don’t know, but for now, the Braves are letting it ride.

There’s also David Hale, another local kid, this time from the Atlanta suburbs by way of Princeton. Hale played both ways in college, went in the third round in 2009 and looked to be the opposite of Wood: a right-hander with relatively solid delivery and command, but no out pitch. Since he arrived in the majors last year, however, Hale has worked with McDowell to perfect a sinker and even out a reverse platoon split, and the early returns are good.

I’d be surprised if both Hale and Wood stick in the rotation all year, but that shouldn’t worry the Braves, who proved this spring that they can also address pitching problems by less creative means, such as throwing a bunch of money at Ervin Santana, who’s been outstanding so far. Mike Minor plans to return this weekend anyway, which will leave Atlanta with the best problem a major league team can have: more starting pitching than it can use.

I was going to say that certain things about Atlanta’s hot start might not last, such as fielding four starters with an ERA under 2.00, but you never know with this team. The Braves will probably win 90 games again this year, with 10 of those wins going either to a pitcher you assumed was out of baseball or a guy you’ve never heard of at all. That’s how the Braves operate, and it seems to work.