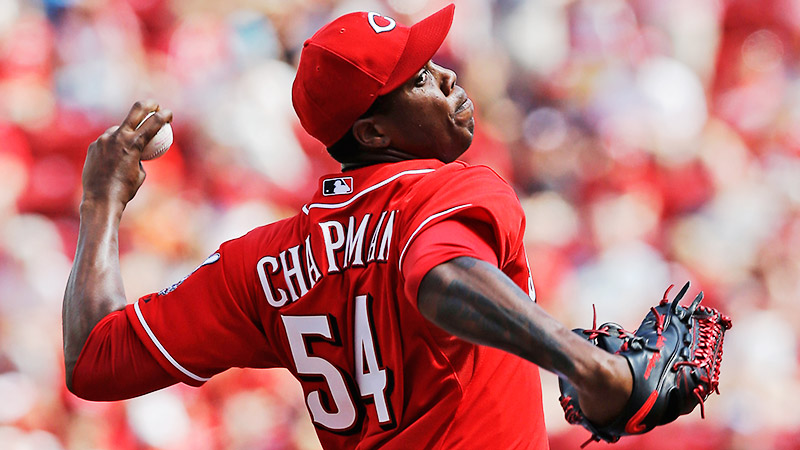 Being able to say, “Come here, look at this, it’s disgusting!” is much less fun when you have to have to immediately add, “It’s OK — he’s not going to die.”

That’s what happened on March 19, when Reds closer Aroldis Chapman stopped a line drive with his face in a preseason game against the Kansas City Royals, suffering fractures above his nose and left eye. It’s always scary when a pitcher gets hit in the head on a comebacker, and the worst of these instances leave indelible images: Bryce Florie’s mangled, bloody face; Matt Clement dropping like a stone. Sometimes the pitcher returns in a few weeks, sometimes never.

And some instances are made all the more horrifying by who hit the ball. The granddaddy of these is the broken leg Bob Gibson suffered when a Roberto Clemente line drive hit him, but Chapman’s injury fit this mold as well. Royals catcher Salvador Perez is a vicious line-drive hitter and, at 6-foot-3 and 240 pounds, an intimidating figure in any terms. On the play in question, Perez barely made it out of the box before he clutched his head in horror.

Facing a 100-mph fastball has to be a terrifying experience for a batter who has a helmet and club with which to defend himself, and who gets to position himself in a balanced stance so that he’s ready to either dodge or bludgeon that five-ounce missile. Think about what it’s like to be the pitcher who sees that ball coming back and has nothing but reflexes and luck for protection. Some pitchers end their windups in a good defensive stance, but Chapman unwinds like a trebuchet; he doesn’t end with his shoulders square to the plate or his glove at the ready.

Not that a different windup and follow-through would have made much difference for Chapman. Perez hit that ball so hard there wasn’t time for Chapman to finish thinking, He hit it … it’s coming at me … I should duck or put up my hands, much less actually duck or put up his hands. By the time he got to I should duck, the ball had already ricocheted off his face and past the third-base line, and we were already moving on to reports that Chapman never lost consciousness but was heading to the hospital for possible surgery.

Two days later, after doctors had cut open his scalp and peeled off his face in order to insert a metal plate above his eye, Chapman posted a photo of his head on Instagram, staples stretching from ear to ear.

Sometimes the most amazing thing about an athlete isn’t his coordination or his strength or his balance; it’s the mental resilience he shows by standing on a major league mound and throwing 100-mph fastballs at batters again, less than two months after “Come here, look at this, it’s disgusting!” and “It’s OK, he’s not going to die.”

That’s the line between mental resilience and mental insolvency that Chapman walked on Sunday, up three runs in front of the home crowd, and with three outs to extract from the heart of the National League’s highest-scoring offense. After a leadoff walk to Troy Tulowitzki, Chapman stared down Carlos Gonzalez and fed him 99 on the black, an 0-1 slider on the black, then 102-mph heat that the career .298 hitter swung through like it wasn’t there. A few minutes later, after four batters, three strikeouts, and 21 pitches, the Reds were on the field shaking hands for the 78th time in Chapman’s career.

Routine. Less than eight weeks after he was nearly killed by the tool he uses to make his living, Aroldis Chapman was back at work, and he made it look routine. For four years I’ve marveled at Chapman’s ability to hit a small target with a baseball thrown at incredible speeds. Yesterday, I marveled at his ability to stand on the mound at all.