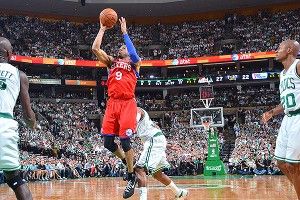 For the second year in a row, the Sixers’ season ended awash in the rosy glow of overachievement. It’s still an enchanting narrative, one that might feature Tom Berenger as Doug Collins in Basketball Educator: The Triumphant Ballad of Lavoy Allen. Yet again, the tough-but-golden-hearted headmaster led his plucky band of youngsters to new heights before being defeated by a heavy favorite. Last time it was the Heat, this time it was the Celtics. No shame there.

For Philly, a franchise that has reeked of mediocrity since Allen Iverson was banished to Denver, this has the intoxicating scent of progress. In 2010, they went 27-55; in 2011 they went 41-41 and made the playoffs; this season, they were 35-31 and ventured into the second round.

Superficially, the Sixers’ current trajectory resembles the ascension of the Thunder. From 2008 to 2011, Oklahoma City’s wins rose from 23 to 50 to 55. Both teams made significant leaps from the primordial muck and then gradually developed four-chambered hearts and tufty mammalian pelts. The Thunder are now bipedal, Urkel-spectacles-wearing, fully formed contenders. Philly is sort of like a giant prehistoric meerkat, awaiting opposable thumbs.

The deflating reality is that the Sixers are nothing like the Thunder. Win or lose, Oklahoma City squints into a future brightened by a core of young stars. Philly has no such promise. And for a young team ostensibly on the upswing, the Sixers are surprisingly entering an offseason where everything is in flux.

Jrue Holiday and Evan Turner have been installed as the backcourt of the future, but neither may ever be an elite player at their respective positions. Lou Williams and Spencer Hawes are both in line for long-term contracts that will hamstring financial flexibility. The prime asset that could be swapped for frontcourt help is Andre Iguodala, who is the team’s lone All-Star and its best player. Finally, there’s Elton Brand. Though more valuable than his reputation as a cap-gobbling sloth would suggest, the earthbound veteran is set to earn $18 million next year. Amnestyville Horror, opening this summer in Philly.

Philly’s glaring problem is that they possess a flock of pretty good players and no transcendent ones. During the Thunder’s stretch of ineptitude — a period that included the franchise’s malingering seasons as the Seattle SuperSonics — they stuffed their faces with the cream of three consecutive drafts. Kevin Durant was taken second (2007), Russell Westbrook fourth (2008), and James Harden third (2009). Replicating the brilliance of the Thunder’s draft decisions is trickier than deciphering the circuitry of Indiana Ron’s noggin, but Philly never even had the chance to pluck players of that caliber.

Despite failing to achieve a winning record from 2004-05 until this past season, the Sixers organization always refused to pinch its nose, clinch an anvil, and sink into the mud at the bottom of the Schuylkill River. As since-deposed GMs Billy King and Ed Stefanski strove to keep their jobs, the Sixers wound up with Thad Young (taken 12th), Marreese Speights (16th), and Holiday (17th). All were fine picks for their position, but none will fold the entire basketball universe into an origami crane. When Philly finally lucked into the second slot in 2010, they snatched Turner. He hasn’t matched the contributions of classmates like DeMarcus Cousins, Greg Monroe, or Paul George, and he probably never will.

So what can the Sixers do now to shake a destiny of 48-win seasons and second-round oustings? Not much. But after years of watching the team slink around like a small-market franchise, disinterested fans are begging for bold moves. The quick fix — assuming new ownership doesn’t mind paying someone not to suit up — would be amnestying Elton Brand and using the liberated funds to sign a young big man like Ersan Ilyasova, JaVale McGee, or Kris Humphries to a long-term contract. All would immediately make the Sixers better, but would require a serious financial commitment to a non-star. Devoting $20 million annually to the pedestrian SF/PF combo-pack of Humphries and Young (inked in 2011 a five-year, $42 million deal) for the next four years sounds disastrous — even before you realize LeBron James only makes $16 million.

Similarly, the Sixers should let Williams and Hawes hit the highway. Lou has been a scoring dervish off the pine, but will command starter’s money. And Spencer will ask to be compensated for 12 good games, a long lingering injury, and a couple nice playoff performances. No thanks.

For a team without superstars, transforming cheap contributors into immovable liabilities is ass-backward alchemy. Iguodala is better than both of them, and was resented as a salary cap albatross until three weeks ago. If Philly hopes to avoid a fate resembling that of the Hawks or other perennial also-rans, keeping financial flexibility is crucial. It’s an era when stars constellate together, and no marquee player is interested in joining a team without the ability to add another.

The best potential option for the Sixers is the rumored deal involving Iguodala and Pau Gasol. The Lakers and their star/coach/GM/tyrannical overlord Kobe Bryant have been enamored of Andre’s athleticism, perimeter defense, and finishing abilities for years, and are increasingly dismayed with Gasol’s postseason fragility. For Philly, the deal is the only visible opportunity to add a legitimate superstar without tacking on massive financial obligations (he and Iguodala have two years left on their contracts).

With Gasol, the Sixers would have a first option on offense and a post presence, a bunch of youthful pieces, the 15th pick in the coming draft, and financial maneuverability allowed by Brand’s expiring contract. Suddenly, there’s a chance of adding Josh Smith or even Dwight Howard in 2013. A starting lineup of Holiday, Turner, Young, Smith, and Gasol might have a shot at the Finals in a season in which LeBron breaks an ankle. But the Lakers will get better offers than Iguodala, the 15th pick, and Nikola Vucevic.

Enough daydreaming: Philly will probably re-sign Williams for $8 million, Hawes for $7 million, and preserve the precious core of the mighty 2012 squad that earned an 8-seed, beat the Bulls without Derrick Rose, and failed to put down a creaky Celtics team. The sweet late-season ride shouldn’t fool the Sixers into spending the summer buying expensive rims and piney air-fresheners for a car that doesn’t even have a real engine.