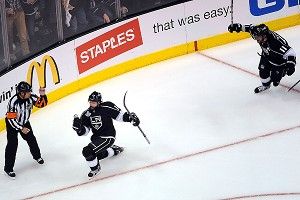 The Kings’ Anze Kopitar has scored two goals in three games against the Devils, and both have been completely devastating. The first came in overtime to win Game 1, and while the second wasn’t a game-winner, it sure felt like one. His tally in Monday night’s Game 3 put the Kings up 2-0, a particularly wide gulf in a series in which the Devils have managed to score just twice.

Just as notable about both goals, though, is how beautifully they were set up by Justin Williams, L.A.’s 30-year-old forward who, somehow, remains relatively obscure despite playing on the team’s top line. The Kings’ top six guys include their captain, Dustin Brown, their marquee scorer, Kopitar, and a second line with plenty of name recognition: former Flyers Mike Richards and Jeff Carter, and of course our beloved Dustin Penner.

And then there’s Williams, who was second on the team in scoring this season with 59 points; who has scored another 14 in 17 playoff games; and whose name you still don’t see too often on the backs of jerseys worn by the Kings fans inside Staples Center or loitering around the plaza at L.A. Live.

Perhaps he’s been passed over because 11 of those 14 points have been assists. But while Kopitar’s forehand move on Martin Brodeur in overtime of Game 1 was the big discussion, it never would have happened had Williams not somehow hit him in perfect stride with a no-look backhand pass that he so humbly described as “just an area pass, and you hope the guy skates into it.” (Kopitar saw it differently: “He chipped it, obviously perfect, right on my tape.”)

And while Brown’s feed to Kopitar during Monday night’s game of tic-tac-toe was more easily noticeable, it was Williams who had first made a calm and nifty little drop-back off the boards to get the puck to Brown. The play looked less like a pass and more like a shrug. And again, Williams shrugged it off after the game: “That’s a play that’s made many times by anyone on the ice,” he said. “The real guys that made that goal were Kopie and Brownie.”

Williams, who also put in his own rebound last night to push the game to 4-0, was traded to the Kings in 2009 from the Carolina Hurricanes. He arrived with a 2006 Stanley Cup ring but also a reputation for always being injured, having suffered ailments including but not limited to a torn Achilles, a bad back, a broken hand, and a torn ACL and MCL (twice).

But he played in all 82 games this year, something he hadn’t done since the 2006-07 season, and has appeared in each of the Kings’ 17 playoff contests. With each game, he’s come closer to getting the recognition he deserves. Although, to hear him tell it after Game 3, it might not have anything to do with his play at all.

“I think it’s because of the beards we’re getting noticed a little bit more,” he said, sporting a pretty magnificent one himself.