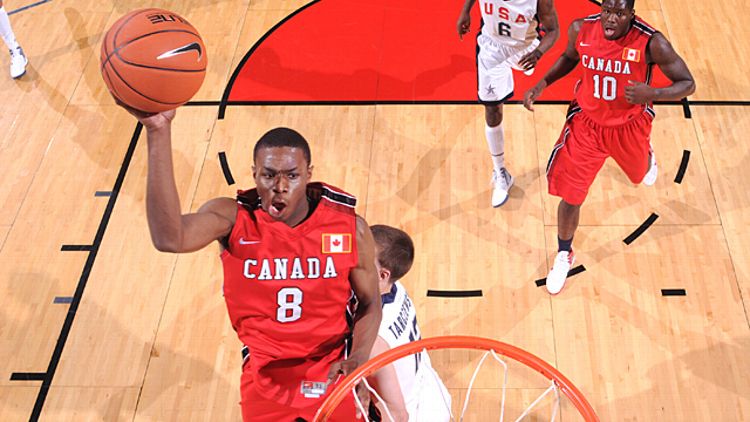 At the end of Andrew Wiggins’s signing ceremony Tuesday afternoon, a good chunk of the college basketball world felt deprived. Fans of Kentucky, Florida State, and North Carolina were chief among them, their hopes dashed when the no. 1 recruit chose Kansas instead. It wasn’t a great day for devotees of garish self-indulgence, either; Wiggins spoke briefly, without theatrics, and allowed just one local newspaper reporter to attend the actual announcement. He didn’t even have multiple hats spread out before him, awaiting his benediction! That’s like having a dance without music, or a Jim Boeheim press conference without passive-aggressive behavior. If you were hoping for this year’s Tony Parker, you were disappointed.

Note 1: The local reporter in question, Grant Traylor of the Huntington Herald-Dispatch, watched his Twitter followers balloon from fewer than 2,000 on Sunday night to just above 17,000 Tuesday at noon, and fall back down to 11,000 by 4 p.m. When I checked today, he was down to 9,197, but he at least has a sense of humor about the whole thing. Here’s his feature on the event.

Note 2: If I ever have to make a recruiting announcement — and it seems like maybe I won’t, at this point — I’d stage a choreographed production where I dance with five ladies decked out in spangled attire representing each school. It would last 40 minutes, with two intermissions because I’m out of shape, and at the end I’d be left with just one girl as confetti rained down from the rafters in the colors of whichever school I chose. Then I’d step forward, grab a microphone, and say, “Just kidding, I’m going to Duke.” And then I’d dance with Coach K, if he was around and up for it. (And with a hyperrealistic Coach K doll if he was not.)

Fantasies aside, here’s everything you need to know about the announcement, the reactions, and what it all means.

Did Anyone See This Coming?

No. Wiggins played his cards very close to the vest — to the point that when he asked his mom (former Canadian sprinter Marita Payne-Wiggins) and dad to guess his choice the night before, they both got it wrong. The only concrete hint he gave during the whole process was when he canceled scheduled visits from Bill Self, Roy Williams, and Leonard Hamilton, which seemed to suggest Kentucky had a leg up, since John Calipari had already come by. But Wiggins insisted it was due to fatigue, and obviously he meant it.

Even Self didn’t expect the good news. Not at the start — “I really thought it was one of those long shots, at least when we first got involved.” Not in the days leading up — “I kept texting him and I couldn’t get him to respond.” And not at the end:

It was also not a good day for pundits, who were pretty sure the decision was down to either Kentucky or Florida State. The few who successfully picked Kansas, like SI’s Andy Glockner, admittedly did so without inside information.

It seems like Andrew Wiggins is a pretty awesome dude. I don’t want to read too much into the low-key ceremony — it could mean that he’s just shy, rather than the World’s Most Humble Man — but there doesn’t seem to be an ounce of prima donna in him. Unless that wide, bashful smile masks a secret Parker-esque ego, his character seems solid. There was even a welcome dose of righteous defiance when he spoke about the ceremony, or the fact that he waited so long to make his decision.

Quote 1: “I wanted the people that appreciate me and the people I appreciate to be here watching while I made my decision because they are the ones who helped me out throughout the last two years and my Mom and Dad throughout my lifetime. I didn’t really want a lot of random people here. I wanted more people I knew.”

Quote 2: “This is the way I like it to be done, on my own time. I’m not working for no one else. I don’t work for no one else’s time but mine. So I decided when I was ready, and when I found the school I liked.”

I’d also like to note that Wiggins was wearing a collared denim shirt. I’ve scoured every video I can find, but the camera remains tantalizingly above waist level. But what we know for sure is that the Ontario native made the biggest announcement of his life in at least half of a Canadian tuxedo. If anyone can shed light on the rest, you’ll be doing the world a great service.

According to his dad: “They run a lot of pick-and-roll, pick-and-pop — a lot of stuff as he goes to the next level, he’s already ready for,” Mitchell Wiggins said. “The system was probably the biggest thing and the coach. Coach Self is a very good coach and Andrew had a good feel for him. I think it’s going to be a great fit.”

According to the man himself: Well, the man himself didn’t say much specifically about Kansas. The only two details anybody got were that he was “following his heart” and “it was the right place for him.” Interestingly, he mentioned the fact that his older brother Nicky plays at Wichita State several times; we’ll probably never know, but the final choice could’ve come down to something as simple as having family nearby.

Did John Calipari Have a Miniature Twitter Meltdown Beforehand?

Why yes, he did. In the hours leading up to the announcement, he tweeted four times about Kentucky’s academic prowess. The timing here could not have been coincidental, so you have to wonder if it was a last-ditch effort to convince Wiggins (or his parents, more likely) that Kentucky was something more than a basketball factory. Or maybe he could read the writing on the wall and was making a desperation play. Or maybe he knew he’d lost Wiggins, and was pissed off at the reasoning and wanted to defend his program.

In case you couldn’t tell by all the “maybes,” this is pure speculation. But the tweets definitely raised an eyebrow.

Could Kentucky’s Other Recruits Have Lost Wiggins for Calipari With an Insulting Video?

Super unlikely. However, the Harrison twins, two recruits from Kentucky’s excellent class, posted a Vine the other day that included a friend of theirs saying, “Fuck Andrew Wiggins.” They took it down immediately, but Adam Himmelsbach, a Louisville Courier-Journal reporter, found a source who said that Wiggins saw the video and “didn’t like it.” The Vine went up last Friday. And based on how little we know about Wiggins’s decision, that makes for some goooood speculatin’!

Did Kentucky Fans React to Wiggins’s Decision With Their Usual Restraint?

Tuesday morning, a Kentucky site implored its readers not to attack Wiggins on Twitter if he chose a different school. A couple hours later, they posted the aftermath. And other than Big Blue Nation hurling horrible slurs at Wiggins, alternately urging him to roast in hell or die in a car crash, and openly rooting for him to tear his ACL, it was all pretty classy!

For more fun Kentucky reactions, check out Bloguin’s post “Douchebags of Twitter vs Andrew Wiggins.” Not safe for work, or your faith in humanity.

What Does This Mean for Recruiting Rankings?

Kentucky is still no. 1, and still has what many consider the greatest class in college basketball history. With five top-10 recruits, it’s an embarrassment of riches. The Wiggins decision can’t unseat the Cats, but it can prevent next year from being a total video game — the kind where you create the starting five, give them max skill value in each category because you know a code, and watch them win every game by 30. Calipari was on the verge of learning the ultimate code. Thanks, Wiggins.

But the signing does shoot Kansas up to no. 2 and give Self his greatest recruiting class since at least the Mario Chalmers/Brandon Rush/Julian Wright/Micah Downs wunderclass of 2005.

When Will We First See Wiggins on a National Level?

Tuesday, November 12, when Kansas meets Duke (and no. 2 recruit Jabari Parker) at the United Center for the Champions Classic. Interestingly enough, Kentucky fans will be in the building for the night’s other marquee game, when the Cats take on Michigan State. Not bad for his first stage, is it?

Derek Jeter's Diary: The Secret Advisory Council of Ghosts of True Yankees Past