Derek Jeter’s Diary: The Secret Advisory Council of Ghosts of True Yankees Past 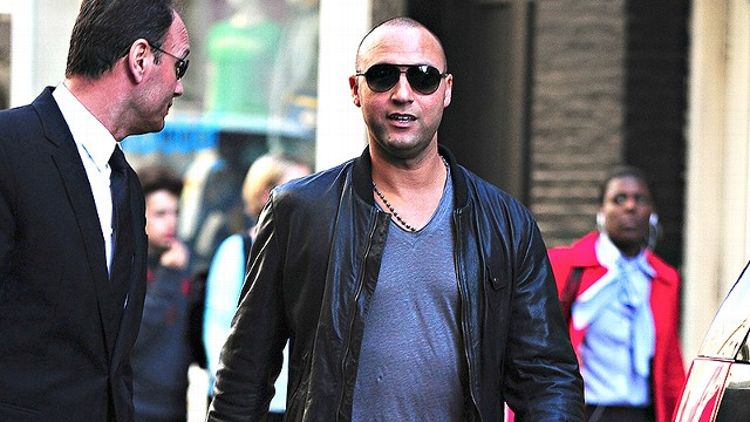 Thursday, May 9: at Colorado Rockies

When I’m in the starting lineup, which has been almost every day of the season since 1996, I think about nothing other than the game I’m playing, or the preparation for the next game. That probably goes without saying, but you have to say it, because otherwise people might form their own, mistaken impressions about how you spend your time. But when you’re apart from the team for physical rehab, you have a little bit more time than you otherwise would to think about the big issues affecting the sport. Not much more time, because during the rehab itself you should be dedicating every spare thought to visualization exercises involving your triumphant, way-ahead-of-any-reasonable-schedule return to the field, the ensuing 15-game winning streak it will spark, and the unstoppable three-month march to the World Series made possible by the momentum-inspiring electricity of a Captain’s return to a temporarily rudderless organization. That kind of mental focus is crucial to your recovery program.

One of those big issues is the reckless accusations that members of the media will make about a player from time to time. You’re trying to watch SportsCenter, just to check on the scores, and suddenly you hear about how a Dan Shaugnessey is accusing a David Ortiz of looking like he’s on steroids. And he has no evidence whatsoever of any wrongdoing, just a gut suspicion that maybe Ortiz’s bat is too quick for an injury-prone player in his early 50s. Let me just say this: You can’t have writers accusing someone of PED use just because they’re playing well at an advanced age, even if that player might have been on a list of people who tested positive 10 years ago and was best friends with a teammate who was suspended for positive tests so many times he decided to retire rather than serve another sentence. That’s not even circumstantial evidence, that’s ancient history. Whatever might or might not have happened a decade ago, even if it was done in a desperate attempt to break an eight-decade curse, has no bearing on what’s happening right now. You’ve got to stick up for your fellow players even when it’s inconvenient to do so because they happen to play for your biggest rival.

Mostly because you’d really hate it if the 24-game hitting streak you’re planning on starting when you finally get off the DL would be spoiled by some NY Post columnist who’d write anything to keep his job in a very tough media landscape.

Friday, May 10: at Kansas City Royals

The team is out in Kansas City, where just about a year ago, Mariano Rivera nearly died on the poorly maintained warning track. Yeah, Mo is fine now, and he might have come back even better than ever because he’s a physical marvel, but he lost an entire season because a low-revenue franchise couldn’t afford to take proper care of its grounds. The Royals had since last May to clean up the chalk outline from the accident and they haven’t even bothered to do that yet. The Yankees send however many millions of dollars to the Royals each year in luxury taxes and rev-sharing, and they repay us by trying to prematurely end the careers of first-ballot Hall of Famers. The only fair thing would be for the team to use some of that New York money to have Mo carried from the bullpen to the mound on one of those Cleopatra thrones made of gold, hoisted up on the shoulders of their four best Triple-A prospects, whenever he’s called in to save a game at Kauffman Stadium. No, it wouldn’t make up for the lost year they caused, but at least they’d be showing a living legend the respect he deserves. And it’s not like the bullpen throne has to be covered in diamonds or anything.

Oh yeah, Girardi won his 500th game as our manager. I had Boone Logan hide a piece of cake inside Joe’s binder. I hope Boonie didn’t just eat it himself. Or otherwise tamper with it. Maybe I should have had someone else handle it. It’s hard to deal with the details of a 500th-win cake from Tampa, I’m not going to lie to you. All you can do is ask a middle reliever to put a piece of cake in your manager’s binder and hope that the results are there for you at the end of the game.

Saturday May 11: at Kansas City Royals

When you’re an umpire, you’re always trying to strike a delicate balance between “never making a mistake” and “making mistakes all the time because you’re just a human being.” MLB has set up a replay system to help umps overcome the limitations of their humanity, but when guys like Angel Hernandez refuse to use it properly and blow calls that are obvious to everybody in the stadium but them, that’s when they run into trouble. The players on the field should be determining the outcomes of games, not guys who are paranoid they’re going to be replaced by robots during the seventh-inning stretch.

One day, after the ump-bots take over, we’ll probably feel nostalgic for the time when humans were free to blow home-run calls on their own. But it’s hard not to feel like the sport will be stronger overall once it’s purged of people who made the very strange life choice to put on body armor and interfere with the proper outcomes of baseball games.

Sunday, May 12: at Kansas City Royals

When you’re the Captain, it’s never easy to be away from your teammates. You know that if they need to look to someone for guidance, you’re not going to be there for them, and they’re just going to have to figure things out on their own. Yes, there are plenty of veterans in the locker room who are proven winners, but it’s just not the same thing. None of them are the unquestioned voice of authority in the clubhouse. None of them wear the invisible C on their chest, and none of them have been anointed with special leadership powers by a secret advisory council comprised of the ghosts of True Yankees Past. They do their best without their Captain to be a steadying influence, but inevitably there are going to be hiccups.

Like when Joba suddenly loses his mind and sasses the greatest relief pitcher of all time. In the dugout, in front of the press, in front of some families who’ve suffered great hardships, and who were visiting Mo during his final season. So now instead of having nothing to concentrate on but trying to keep winning until the reinforcements arrive from Tampa, everyone’s dealing with Shushgate. You hate to think that things would have been different if you were there to lead by the example of freezing Joba out with such Arctic coolness that he’d need to dig out his locker with a snow shovel after the game, but there’s not much you can do from Tampa.

Except deliver a long-distance order for the rookie relievers to freeze Joba’s locker solid with liquid nitrogen. As Captain, it’s not your job to worry about where they might actually find the liquid nitrogen. That’s someone else’s problem. The important thing was that a highly targeted locker-freezing occurred 1,200 miles away. That invisible C makes things happen.

We also swept the Royals. All sorts of messages were being delivered today.

Monday, May 13: at Cleveland Indians

It was nice to hear that Shushgate ended without too much more drama. At the end of the day, the team is a family. A family where the loud little brother returned to his locker after a doubleheader split, found that his civilian clothes had somehow been burned to a pile of ashes in the “spring thaw,” and learned a valuable lesson about shushing a sibling with 624 career saves.

Tuesday, May 14: vs. Seattle Mariners

Grandy’s back with the team. And I’m still here in Tampa.

You never want to feel like recovering from a serious injury is a competition, and you can’t really compare a forearm fractured in spring training to an ankle shattered during the playoffs, but it’s still disappointing that one guy’s back in the outfield in May and the other guy won’t be there until after the All-Star break.

Some things you can’t fix even with the invisible C.