Andrelton Simmons, Jackie Bradley Jr., and Resisting the Temptation to Hit for Power 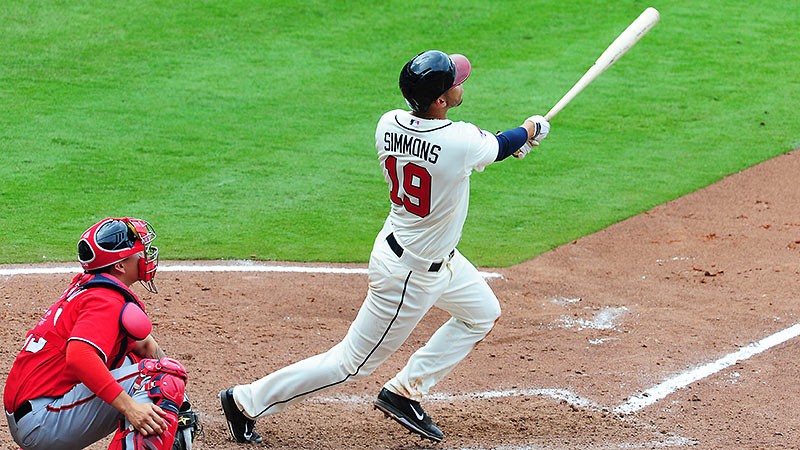 We’re going to learn a lot about defense in the next five years, as Major League Baseball releases PITCHf/x-type data for fielders and batted balls, and the people capable of doing big data–crunchy stuff start to figure out what things like route efficiency mean.

One of the things I suspect we’ll learn about defense is that Braves shortstop Andrelton Simmons and Red Sox outfielder Jackie Bradley Jr. are really good at it. Simmons might not actually be worth five wins on defense alone, as Baseball-Reference suggested he was last year, or he might be worth more; either way, he’s the best defensive player in the game. Bradley’s not quite that good, but once Grady Sizemore tears his rotator cuff opening a jar of peanut butter later this season, Bradley will slide over to center field and immediately become one of the game’s best defensive outfielders.

Simmons, 24, and Bradley, who turns 24 on Saturday, are going to be valuable regulars for at least the next decade based on defense alone. That’s their floor. Their ceiling depends on what they do with the bat, and whether they become offensive assets or players the manager buries in the 8-hole just to get the glove in the lineup. To become offensive assets, the best thing for both players, strange as it seems, might be to forget about hitting for power.

Simmons’s offensive game is predicated on one thing: his contact skills. At 6-foot-2 and 195 pounds, Simmons isn’t exactly Mark McGwire, but he’s big and strong enough to hit the ball out when he wants to, and indeed, he hit 17 home runs in 2013. But Simmons never walks. A player can never walk and still be an above-average hitter if he does one of three things well: beat the ball into the ground and run like hell, hit a ton of line drives and never strike out, or hit for huge power.

Last year, Simmons tried to go for the third route, and while 17 homers is a great total for a shortstop, the break-even point on selling out for power is way higher than the .396 slugging percentage he posted. And while Simmons is certainly an adequate runner, he doesn’t have Billy Hamilton speed or even Ben Revere or Elvis Andrus speed, which is what he’d need to turn a slap-and-run approach into an above-average OBP. What Simmons does have is a very good hit tool. Tony Gwynn walked almost as infrequently as Simmons, and Gwynn dropped soft line drives behind the infielders and in the gaps for 20 years. Simmons’s hit tool isn’t as good as Gwynn’s was — God’s hit tool isn’t as good as Gwynn’s was — but Simmons made contact on 87.4 percent of his swings last year, which was 21st in the majors among qualified hitters. He also posted the fourth-lowest strikeout rate, and he’s yet to strike out this season. He has two home runs and is hitting .333.

Simmons can be an effective hitter, but he sacrifices some of what makes him effective when he tries to add pop. Last year, while mashing those 17 homers, Simmons hit .248/.296/.396, for a 91 wRC+. While that’s just fine for a shortstop with Simmons’s kind of glove; it turns him from an offensive asset into someone Fredi Gonzalez needs to hide in the lineup. In limited duty in 2012, however, Simmons hit .289/.335/.416 with a fly ball rate about two-thirds what it was in 2013, for a 103 wRC+. He hit three homers in 49 games, which would have projected to 10 or so over the amount of games Simmons played in 2013. With a lot more singles, a few more gap doubles, and fewer fly ball outs, Simmons could actually be an offensive asset. He’ll also still be able to do things like this:

Bradley’s offensive game is very different, but it’s similarly vulnerable to overreaching in the name of hitting for power. There’s a ton of swing-and-miss in his game — this spring, Baseball Prospectus’s Jason Parks called JBJ’s hit tool “more solid-avg than plus” — but Bradley makes up for it with one of the best batting eyes in baseball. Simmons dines out on being able to put just about anything he sees in play, while Bradley relies on his patience to get on base.

Simmons is sort of skinny, but he’s still a big, rangy, athletic dude. Bradley is the size of a large seventh-grader, and while his appearance has caused every national or out-of-town announcer I’ve seen to rave about his speed, Bradley is an average runner at best. Though it’s logical to assume that limited speed would prevent a player from becoming an impact defender in center field, Parks’s write-ups make Bradley seem like a telepath in the outfield. Red Sox teammate Shane Victorino, a former high school track champion, will, at the crack of the bat, run in any direction more or less at random, then use his speed to course correct and chase down the fly ball. Bradley, though slower, is more economical in his movements, taking shorter routes and judging the ball’s flight correctly almost every time.

That subtle, cerebral approach carries over to Bradley’s hitting. Despite having just 155 career plate appearances, Bradley has publicly divulged volumes about his hitting approach. Earlier this week, he told Sports on Earth’s Howard Megdal that the wild variations in his performance over his short major league career had nothing to do with changes to his approach and everything to do with the tyranny of small sample size. While Bradley was terrible in an audition early last year, he took what he learned and made adjustments to the approach that had worked for him since high school. He doesn’t have a home run yet this season, but he’s third on the team in OBP. He’s like the Borg.

The trouble comes when Bradley deviates from his refined approach to try to pull the ball and sell out for power. In last winter’s top-100 prospect list, Keith Law said of Bradley: “When he tries to over-rotate to hit the ball out to right, he expands his zone and makes less contact as a result.”

Like Simmons, Bradley’s floor for batting average is somewhere just south of .250. Unlike Simmons, Bradley is less capable of overcoming that potential limitation with power. Bradley needs to hit for a good average to play every day, and if he sacrifices his superb plate discipline to sell out for home runs, he might hit 10-15 a season instead of 5-10, but he’ll also register more fly ball outs and strike out more as a result. Peak Bradley, the one who’ll hit .280/.370/.440 and score a billion runs while getting on base in front of Xander Bogaerts a few years down the road, would get back to something he discussed with FanGraphs’s David Laurila in November 2011, 10 games into his professional career. When Laurila asked Bradley what issue caused him to slump, Bradley said this: “I’m probably not using the other side of the field as much as I should. I’m probably pulling off too soon, or trying to do much, instead of just being myself. … You get overconfident. You start thinking you’re good. Everything is going good for you, so you want to start jerking the ball. You start amping it up and swinging a little harder. What you should do is just keep doing what you’re doing. Less is more.”

Simmons and Bradley could both take leaps this season, and if they do, their ability to understand that will be the reason.

A Conversation About the Wizards