A Conversation About the Wizards 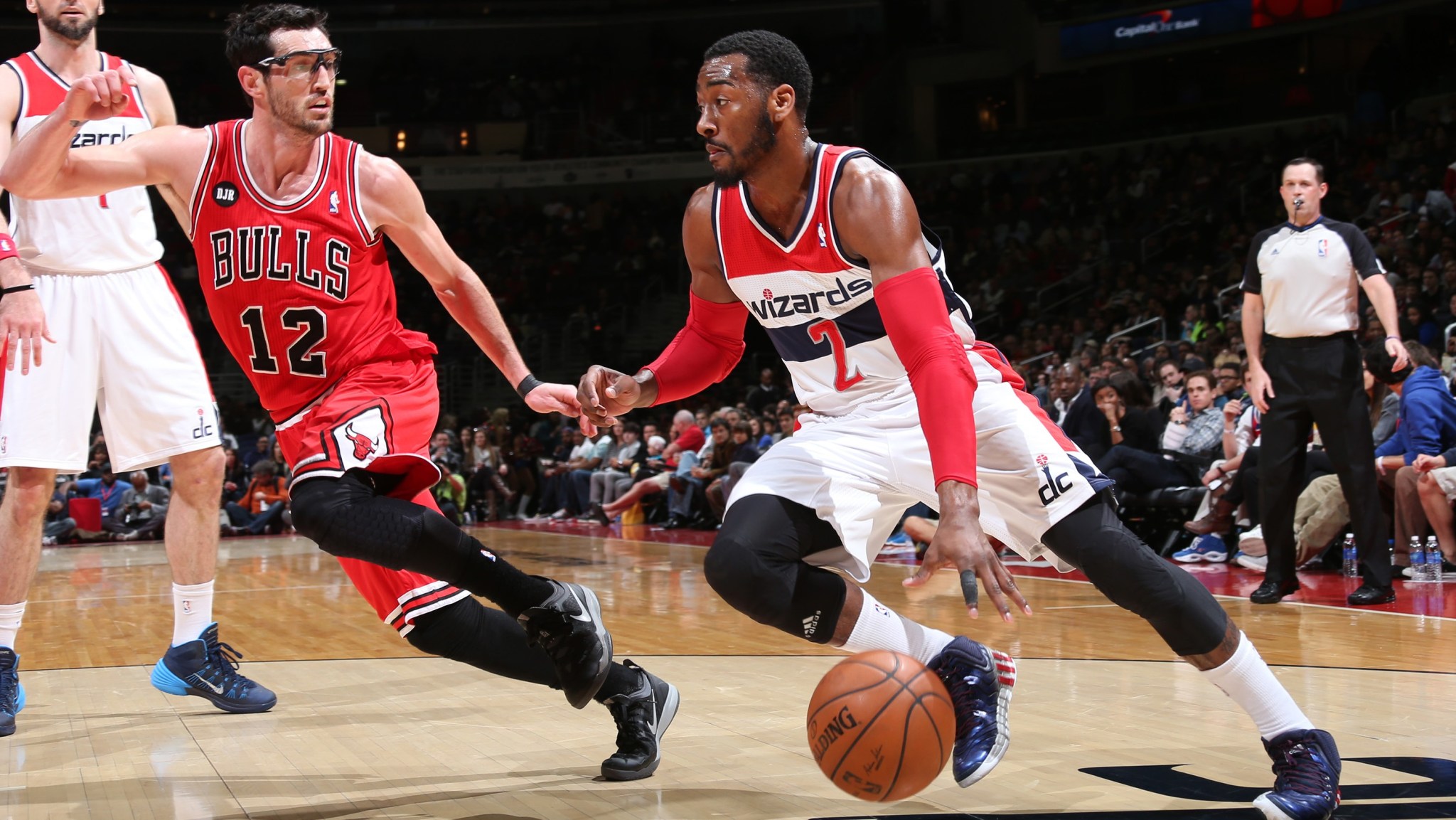 OK, the playoffs are here.

I’ve been putting this off as long as possible because it’s too frustrating to think about, but it’s time to talk about the Wizards.

Thanks to some emergency tanking from the Nets, the Wizards wound up finishing fifth in the East this year, and on Sunday night they’ll be matched up with the Bulls. As someone who stupidly loves this Wizards team more than anything in sports, I’m not sure how to feel. It’s been like this for the past six weeks, honestly — when they were fighting for a playoff spot, when they were trying (and failing) to clinch, when they were battling with the Bobcats. It was like that again last night, so in the interest of purging the psychosis before the playoffs actually start, let’s put it out in the open.

This whole time, there have been two competing voices in my head. What follows is a transcript of the conversation those voices had last night.

(Note: This is literally a conversation between voices in my head, so if you consider yourself too sane and/or apathetic toward the Wizards for that sort of thing, then by all means, keep it moving.)

BELIEVER: God bless this team. There were times when they were stupid, there were times when it looked like it was all gonna fall apart, there were too many bad losses to count, but they made it. I didn’t think we’d ever see the day. Remember when Ted Leonsis said John Wall, Jordan Crawford, and Andray Blatche were the “new big three”? Jesus Christ.

It was bleak for a while there.

Even nine months ago. Remember when everyone wrote this team off after the Emeka Okafor injury? Remember how everyone made fun of us after the Marcin Gortat trade? And the Bradley Beal injury halfway through the year? Nobody believed in the Zards, but we made it. Somehow. It still doesn’t feel real. The Washington professional basketball team is relevant for the first time since the George W. Bush administration.

It’s a great day to be a Wizard.

HATER: OK, but here’s the thing: The Wizards are not actually a good team. The difference this season is that they stopped being an awful team. They had games where they looked great, more games where they looked sloppy and overrated, and in the end I guess you could call this season mediocre. This isn’t something we should get that excited about. The Wizards are the fifth seed in the East, but that’s pretty misleading.

The fifth seed in the West won 54 games.

The Wizards won 44, and their last four wins were against teams that were either aggressively tanking or resting stars. Subtract late-season wins over the Heat without LeBron and the Pacers in free fall, and they’ve got two W’s against above-.500 teams since the All-Star break. Or to put that differently: Washington’s “good team” is 2-7 against good teams for the past eight weeks.

You mean 4-7, right? You can’t just not count wins against Miami and Indiana.

Fine. They’re 4-7 including the ghosts of Miami and Indiana. With losses to Denver and Sacramento sprinkled in, plus a 15-point collapse against the Bobcats.

And also a Nene injury that hurt the whole team … Look, forget the schedule and the bad losses. The Wizards have good players for the first time in forever. Those players can hang with the Bulls. They will make the playoffs fun all over D.C., and then they will build on this next year. All of this is a good thing.

That’s the thing. They DO have good players. This team shouldn’t be this bad. But go back to that Leonsis quote about the new big three. 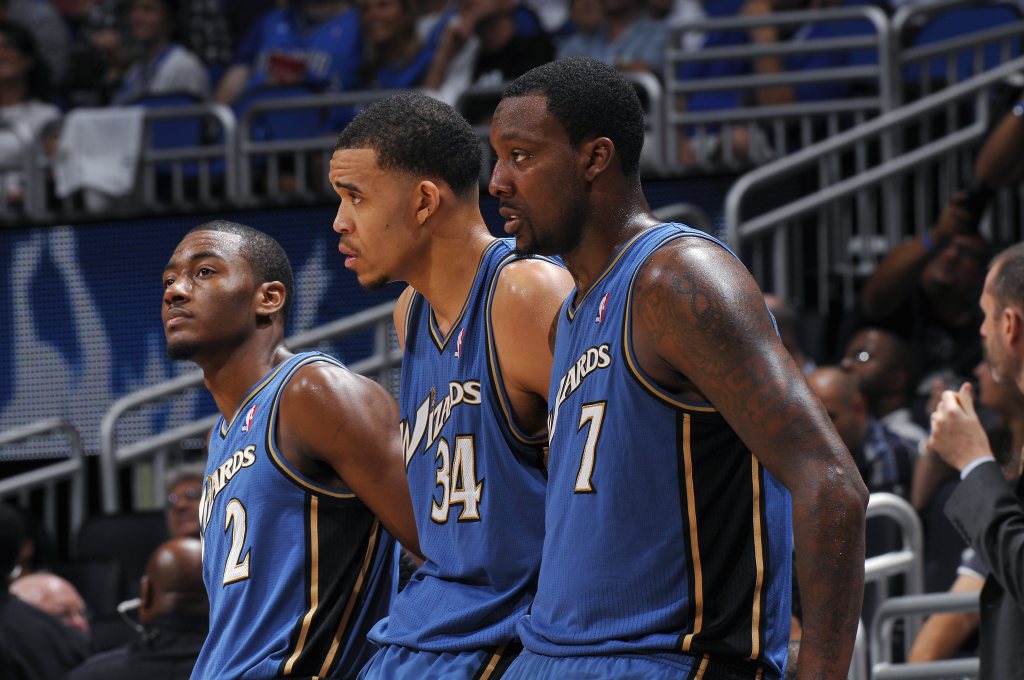 I’m not sure the Wizards are any less delusional than they were then. This year looks like progress, but the Wizards went 24-25 with Wall healthy last year. This year, they started 25-28, and barely got above .500 playing the worst Eastern Conference we’ve seen in years. What’s different? Nobody has gotten better. If anything, Beal’s gotten worse as the year’s gone on, and Wall has become more inconsistent than ever over the past six weeks.

And this is why I’m worried. Leonsis started the year with a playoff mandate for the coaches and players and management, and they made it, but nothing actually changed. For this team to improve, the young stars need a real coach who will make them better — please stop taking those midrange jumpers — and a GM who will surround them with real talent as opposed to just panicking to fill holes every year. It’s why I’ve been quietly rooting against them for weeks, and it’s why I’m rooting against them in the first round. The Wizards getting blown off the court might be the only thing that convinces the Wiz leadership they need to make a change.

You’re rooting against your own team? Are you sure you’re actually a Wizards fan?

YES. The Wizards have good players, and this is getting ridiculous. It was a fun year, and I was enjoying it, but then I looked up and saw Steve Clifford taking a crappy Bobcats roster and beating us three times since the All-Star break. This is when I realized it hasn’t been that much fun to watch Wall and Beal since All-Star Saturday Night, and at some point winning a bunch of ugly games against horrible East teams shouldn’t be an accomplishment. If the Wizards bring back Randy Wittman and Ernie Grunfeld, we’re just gonna keep doing this for the next three years.

Both those guys have done a good, possibly underrated job making this transition work — from the Gilbert Arenas era to what we have now — but their contracts are up this year, and it’s perfectly OK for this team to go in another direction.

OK, sure, Randy Wittman is not great.

Let the record state: Even the believer thinks this.

But that’s not a reason to root against this team.

Yes it is. The Wizards have just enough good young players to attract another superstar. If they play this right and hire a real coach this summer, go out and win 50 games next year, and free up cap space, then suddenly they become one of the best young teams in basketball and a pretty attractive free-agent destination for the best players in the league. There’s a chance for this team to get really, really good.

Not just a team that’s not bad, but an actual good team that will get people excited.

The Wizards aren’t getting Kevin Durant or Kevin Love.

They definitely won’t if they bring back Wittman and Grunfeld and overpay Gortat and Trevor Ariza this summer! And the Wizards have been making choices like that for my entire life.

This isn’t that complicated. This week the Blogfather Dan Steinberg asked why Washington D.C. isn’t excited about the team this year. You know the biggest reason? Because they’re not that fun to watch. I can’t blame all my apathetic friends in D.C. for skipping the chance to see Wall go 8-of-22 while the offense breaks down in the fourth quarter and the Wizards lose 90 percent of their close games.

The Wizards are a playoff team like Macklemore is a rapper. Technically true, but anyone that takes them seriously is automatically suspect.

Now you’re just being a dick.

You’re right, that was too far.

Come on. Are you forgetting how awful this team was at this time last year? They’re in the playoffs this year. They can absolutely win against Joakim Noah and the 85-point Bulls offense they’re rocking with in Chicago. Even if they don’t win, we’re on national TV all week, and the best young backcourt in the league is getting playoff experience. Where is the Wizard party GIF?

Whenever this franchise stops celebrating average teams, it might actually have a chance to win games that mean something.

Do you have any idea how insufferable you sound? You need to get the Kyle Lowry treatment.

Look, there’s no question this team would’ve won another 10 games with Stan Van Gundy coaching this year. There’s no question the bench was a mess. A new coach and a new GM would be a good idea going forward. Will the ownership realize this at the end of the year? Maybe, maybe not. Probably not. This is what makes them the Wizards.

But you’re taking this way too seriously. It’s sports. You may sound smarter than the fan who blindly roots for this team, but you’re really not. Life is too short to root against the team you love because of some hypothetical scenario in which they go from good to great in a few years. Sometimes it seems like everyone gets so obsessed with “building a contender” that they forget to cheer for the team they actually have.

If you want to spend all this time second-guessing everyone and waiting for the perfect team and the perfect blueprint, you will just end up miserable for most of the next 30 years. Besides, it’s always stupid to give management the power to dictate your happiness. Just enjoy what we have here.

Enjoy that Bradley Beal isn’t Jordan Crawford. Enjoy that Marcin Gortat is a Polish machine who cannot be stopped on the pick-and-roll. Enjoy that Nene is a little bit like Brazilian Confucius, and that he’s the spiritual center of the whole team. Enjoy Trevor Booker throwing his body all over the court. Enjoy John Wall going 150 mph to the hoop. None of them is perfect, but this is your team. Maybe even enjoy Randy Wittman, because while he’s been an aggressively mediocre coach for the past two-and-a-half years, he’s YOUR aggressively mediocre coach, and the Wizards wouldn’t be #SoWizards without him.

Nobody believes in this team right now, and they probably shouldn’t, but YOU should, hater. Because honestly, if you’re not going to root for your team to shock the world, then why are you even watching sports?

Wanna be a realist who’s constantly miserable? Go do something important with your life and at least have the decency to try to fix politics.

Me? I’m ready to watch John Wall make D.J. Augustin’s life a living hell, while Beal and Ariza rain 3s on Chicago and make the whole city as miserable for the next two weeks as Tom Thibodeau is all the time. This bandwagon’s leaving the station. Are you in or are you out?

Fine. OK. You make some good points. I’m in. As long as someone at the Wizards realizes how crazy it is to spend huge money on good young players and then pair them with mediocre coaching and aging, overpaid teammates for the first seven years of their career.

Fine, whatever. Let’s do this. Fuck the Bulls? 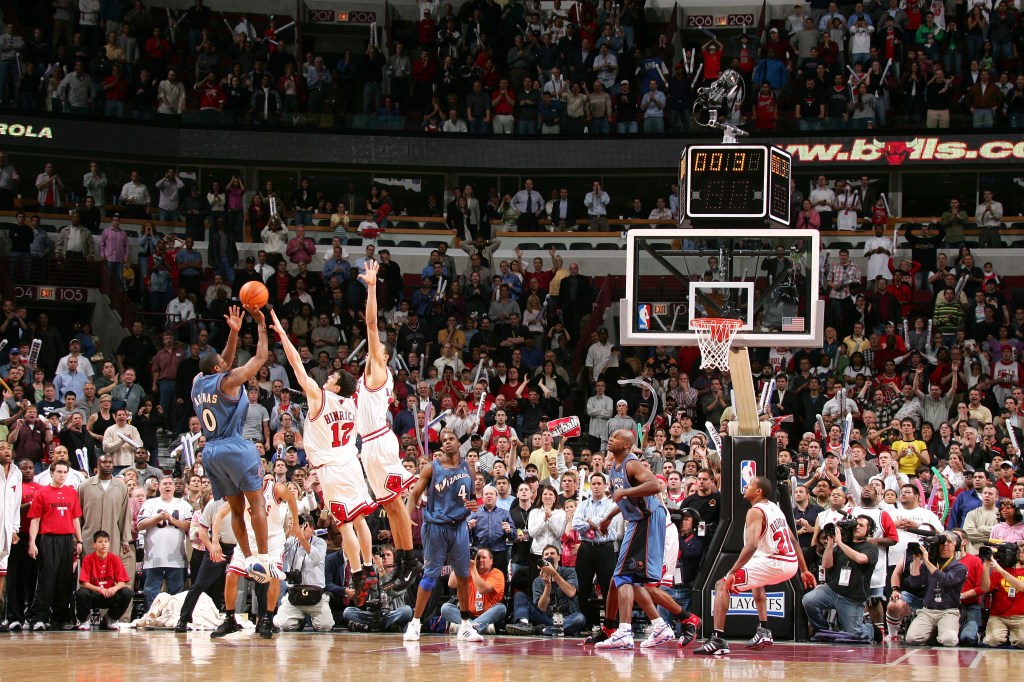 Andrelton Simmons, Jackie Bradley Jr., and Resisting the Temptation to Hit for Power

NBA Regular-Season Shootaround: Good-bye to All That