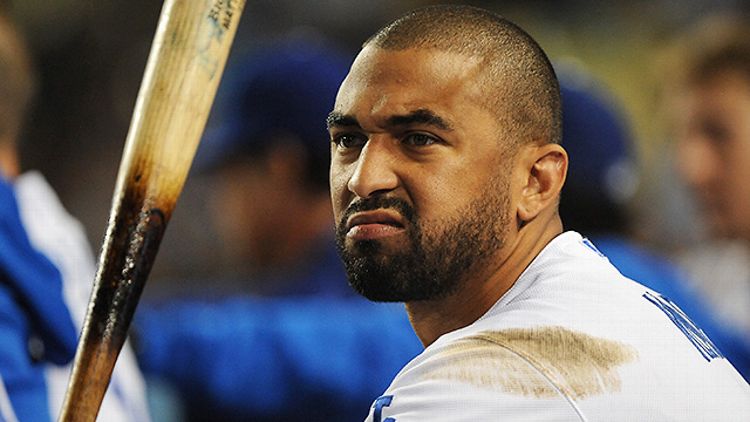 This week’s winter meetings were a relatively quiet affair. But what if they hadn’t been? What if one domino had fallen differently before baseball’s executives set out for Orlando, altering the course of the meetings — and probably the course of history, because that’s how this butterfly-effect stuff works. What if … Curtis Granderson hadn’t signed with the Mets?

Here’s an alternate history of the winter meetings in which Granderson enters as a free agent, almost everything happens differently, and we get way more interesting headlines than the ones we got in reality.

Jonah Keri on the late flurry of action and what might come next.

Jonah Keri on whether Arizona just got better or worse.

Baseball’s winter meetings got off to an interesting start on Monday morning, when the Detroit Tigers brought back a familiar face, signing outfielder Curtis Granderson to a four-year, $60 million contract.

“I’m happy to be back,” said Granderson, who left Detroit almost four years earlier to the day in a three-way deal that netted the Tigers center fielder Austin Jackson and eventual Cy Young winner Max Scherzer. “I had some great pitches from other teams, but no matter how much I love the salmon in New York, I figure if I’m making $15 million a year, I can buy a salmon farm and hire a chef and actually have a snowball’s chance in hell of winning a World Series.”

Granderson acknowledged that Detroit’s championship dreams are getting harder to reach as the Royals and Indians continue to ascend. He called the Tigers’ campaign for a fourth-consecutive division title “potentially an upstream swim.”

Tigers GM Dave Dombrowski was pleased with the signing. “We were surprised to learn that our previous strategy — earn the MLB win bonus for trotting out a crappy left fielder on an otherwise loaded team — wasn’t working, because no such bonus exists. Curtis is a good hitter, a great clubhouse influence, and insurance against doing something completely goddamn idiotic with that left field vacancy, like signing Rajai Davis to a multiyear contract.”

In an effort to push his aging team back into contention, Phillies GM Ruben Amaro signed free-agent outfielder Nelson Cruz to a five-year, $80 million contract on Monday night. Cruz will fill the left-field spot vacated by Domonic Brown, the 26-year-old former no. 1 prospect whose breakout season was one of the few bright spots in a disappointing 2013 campaign for Philadelphia.

Gruff but charming Baltimore manager Buck Showalter was pleased with the move. “We’re sad to lose Chris, but Brown is a guy we can hit in the middle of the order and he fills our left-field hole,” Showalter said in a gruff but charming way. “Plus, when Franco comes up in a year or two, he’ll allow us to move Manny Machado back to shortstop. Mini-Keg is wasted at third base — I think [Orioles GM Dan] Duquette did a great job.”

In assessing the move, Amaro was his typically confident self. “We got a guy in Cruz who had 76 RBIs in 109 games last year, plus 16 wins in Chris Tillman. We’re buying wins here. Last year, we were 17 games out of the wild card — we’ve almost made up that entire gap with Tillman alone.”

The Philadelphia media was less pleased with the day’s events. In an ESPN Radio segment, Crashburn Alley’s Bill Baer halted his commentary on Cruz’s lackluster defense in order to launch into a chorus of “Do You Hear the People Sing?”

(*Fiction is always more interesting with a little truth sprinkled in.)

The Pirates announced that the total $26 million due to the two pitchers would be paid not out of the team’s revenues, but from the sale of more than half a metric ton of gold that Huntington created simply by touching various household objects.

In a bizarre twist, this story was not first reported by Chris Cotillo, the high school senior who’d made waves in recent weeks by breaking baseball’s most important hot stove news. Cotillo, whose work for SB Nation had made him something of a celebrity in baseball circles, was grounded for the duration of the offseason after missing curfew. Despite accusations that he’d been out until 3 a.m. texting agents and wiretapping Ben Cherington’s phone when he promised he’d be home by 11:30, Cotillo claims he was in fact abducted by three men resembling Buster Olney, Ken Rosenthal, and Jon Heyman, then held against his will until he promised to stop scooping stories.

“First basemen are a limited commodity,” Zduriencik said. “We’ve cornered the market on guys who strike out a lot and can’t run, so if a team wants one, it has to come through us and pay a premium. Besides, we can play them all together — depending on what order you touch the bases in, any base can be first base.”

Disturbed by the dwindling number of corner outfield options left on the market, and priced out of the Shin-Soo Choo sweepstakes, Rangers GM Jon Daniels turned to the West for his left fielder, sending three minor leaguers, including prize second-base prospect Rougned Odor, to the Los Angeles Dodgers for Matt Kemp. Kemp, who was one of the National League’s best players before he missed 145 games over the past two seasons, will look to rejuvenate his career with an organization that brought Josh Hamilton back from the edge of the abyss.

Speaking of the edge of the abyss, the rapid movement of corner outfielders connects to a chain of events that began with the assassination of Austro-Hungarian archduke Franz Ferdinand, after which Austria-Hungary declared war on Serbia, Russia declared war on Austria-Hungary, Granderson signed with Detroit, Cruz signed with Philadelphia, Brown went to Baltimore, and now Kemp goes to the Rangers. In response, Kaiser Wilhelm II ordered troops across the Belgian border and declared war on Russia.

“We do not undertake this war lightly,” said the Kaiser. “But our treaty obligations and the lack of right-handed power left on the market leaves us no choice.”

This trade replenishes Los Angeles’s farm system and clears up an outfield logjam, but a source close to Dodgers GM Ned Colletti worries the human cost of sustained trench warfare could keep his team from winning its first World Series since 1988.

The winter meetings that sparked a world war closed with the biggest deal of the offseason, as the Diamondbacks sent a six-player package to Tampa Bay for pitchers David Price and Jake McGee.

For the second time in as many offseasons, Tampa Bay traded a pitcher many label as an ace, following up last year’s James Shields swap with this deal, which sends 2012 Cy Young winner Price across the country for Tyler Skaggs, Adam Eaton, Chris Owings, Ender Inciarte, Evan Marzilli, and Matt Davidson.

Though Towers did keep Bradley, he gave up Davidson and Owings, whom Baseball America ranks as the nos. 3 and 4 prospects in the Arizona system behind Bradley and Braden Shipley. Shipley, a 2013 draftee, isn’t yet eligible to be traded. Skaggs and Eaton were the nos. 1 and 3 prospects in the system last year.

“We’ve seen all we want to with those guys,” Towers said. “If a rookie can’t succeed immediately in the majors while you’re screwing around with his mechanics and forcing him to work in close proximity to Miguel Montero, he’s never going to succeed. We proved this with Trevor Bauer last year.”

Rays GM Andrew Friedman could not be reached for comment. Sources close to the Rays organization say Friedman and manager Joe Maddon have rented a truck and are driving around Central Florida with the intention of buying every bottle of champagne within 20 miles of Orlando.