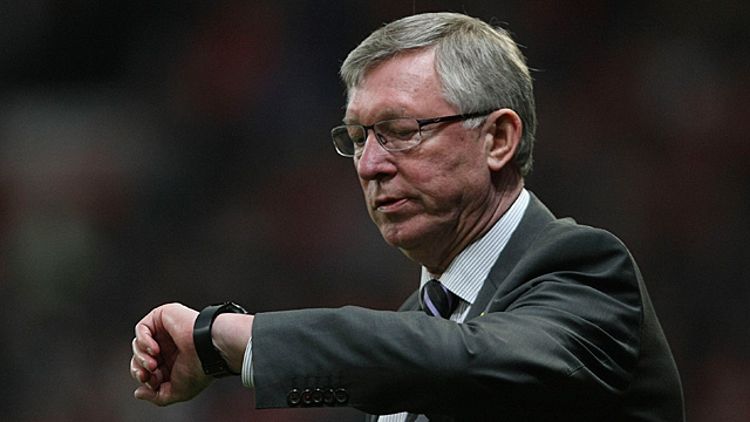 1. Before Alex and After Alex

As any Liverpool fan with a good memory will be happy to tell you, English football did not start with the Premier League’s 1992 formation. It can sometimes feel that way; the league is rather proficient at self-mythology, so much so you’d think an achievement like, say, Tottenham’s double-winning 1960-61 side played football in another dimension. But there are decades of legendary players, dynasties (yes, Liverpool), and shocking anomalies (Brian Clough’s Nottingham Forest, for instance) that came before Sky Sports and the Illuminati conspired to create the sports-entertainment juggernaut that is widely regarded by people who don’t watch La Liga and the Bundesliga as the best football league in the world.

But was there English football before Sir Alex Ferguson? That’s actually hard to recall. The Manchester United manager retired today with 13 Premier League titles, two Champions League trophies, five FA Cups, and four League Cups. He is, unscientifically, the greatest manager or coach in modern sports history. No other leader has been so successful for so long, and been so adaptive while seeming, at least on the surface, to be so unchanging. When football players were carb-ing up with pies before matches, sneaking halftime cigarettes in toilet stalls, and putting together a decent lager buzz almost before the final whistle of a match, Ferguson was there. And when players started having their every movement monitored by Prozone, ate nothing but whitefish and green veggies, and tactical chalkboards started looking like a prop from the set of A Beautiful Mind, Ferguson was there. He’s won on cold, rainy nights in Wigan and on “that night in Barcelona.” In 27 years at Old Trafford, he has managed some of the greatest players in the history of football, including Roy Keane, Bryan Robson, Cristiano Ronaldo, Peter Schmeichel, Ryan Giggs, Wayne Rooney, Rio Ferdinand, and Paul Scholes. He also managed Bebe.

For as hard as it is for some to imagine a football world before Alex Ferguson, it’s even more difficult to imagine one after him. His fingerprints are all over the game. Along with his nemesis in the south, Arsene Wenger, Ferguson is one of the greatest developers of young football talent in the history of the sport. He has run an informal coaching academy from his technical area, acting as a kind of Yoda to many coaches and managers in football. The post-match glass of wine with Fergie was a rite of passage for any gaffer, though some were more memorable than others. Here’s Fergie on happy hour with Jose Mourinho: “He was certainly full of it, calling me boss and big man when we had our post-match drink after the first leg. But it would help if his greetings were accompanied by a decent glass of wine. What he gave me was paint-stripper.”

For my entire football-watching life, the way you thought about English football was how everything related to Manchester United. It was like Ferguson had the right of first refusal on winning the Premier League. No matter what else was happening — be it the glorious Arsenal teams of Henry, Bergkamp, and Vieira; the mid-’00s dominance of Mourinho’s Chelsea; the revival of Liverpool under Rafa Benitez; or the noisy neighbors at Manchester City — all their success seemed predicated on Ferguson and United. I always thought of this line Albert Finney’s Irish mob boss says at the beginning of Miller’s Crossing. In addressing an upstart Italian mafia chieftain, Finney’s Leo says …

That was Ferguson to his competition. Now we’re going to find out how big they can get without him.

2. Tick of the Clock

Here’s former Sunderland manager (and current boss of newly promoted Hull City) Steve Bruce, back in 2009: “How often do we see it? The Sky cameras are panning in on the manager, right close in on him studying his watch … The manager has such a way about him that referees know he’s watching the clock. With what he has achieved and his standing in the game, it gives him that power to make sure the refs add the time on. We all think United are going to get a bit extra at Old Trafford.” He’s talking about “Fergie Time,” the extra time at the end of a Manchester United match. Extra time gets added to pretty much all football matches, for all sorts of reasons: to make up for substitutions, injuries, streakers, flares … rescuing Carlos Tevez from a mob of ecstatic West Ham fans; all sorts of reasons. At United games, at Old Trafford, time seemed to get added on because Ferguson said so.

It should come as no surprise then, that the timing of Ferguson’s announcement suits Ferguson most of all. At 71, with his 20th English domestic league title sewn up (seems like it has been since October, doesn’t it?), and the chances that United could win the Champions League next season pretty slim (it’s hard to imagine any club but Bayern winning, isn’t it?), Fergie is going out on top, with class, and dignity. He is not some sputtering old man on the sidelines, straining to understand the game in front of him. He is going to move upstairs, into a director’s role at the club, and oversee the transition of power to the next manager. He was going to retire once before after the 2001-02 season, but he saw the damage his departure would cause, not only to his club, but perhaps to himself. Even his wife didn’t want him around: “I think she thought she would soon be fed up with me around the house.” Now, with chief executive David Gill also set to step down from the club, now seems like the right time.

(Albeit a profane, hair-dryer-throwing, horse-owning, gum-chewing butterfly.) I don’t know if I can think of another event in recent football history that will have such a huge impact on the game as Alex Ferguson’s retirement. Sure, the introduction of petro-dollars into clubs like Chelsea, Manchester City, and PSG will probably define this era. But this time next year, let’s meet at this same spot and see how many clubs and players have been affected by one Scotsman deciding he was done haranguing fourth officials. Like what you ask? OK, let’s start with who will manage United next. It’s probably going to be Everton’s David Moyes, which will have a huge impact on the future of the financially strapped Merseyside club. Or maybe it’ll be Jose Mourinho. Who knows how that could change Chelsea’s plans (Mourinho is tipped to return to West London), or Real Madrid, where Mourinho currently manages, and where he apparently has a hefty buyout clause. Any managerial move here will cause a ripple effect that will be felt throughout Europe.

And it’s not just managers we have to think about; this is going to have a huge impact on players. Is Wayne Rooney going to want to stay at a Manchester United club managed by Moyes, a man he’s had problems with in the past? Does the absence of Ferguson make United a less attractive destination for the likes of Borussia Dortmund’s Robert Lewandowski and other star-caliber European talent who, ordinarily, would put United at the top of their transfer destination lists? Will Ferguson’s departure spur other clubs in England — Chelsea and City, but also more frugal clubs like Arsenal, Tottenham, and Liverpool — to go on spending sprees, sensing an opportunity capture the Premier League title? Even though he’s retiring, Ferguson’s influence on English and European football will be felt for years to come. Even after he’s gone, we’ll still be in Fergie time.