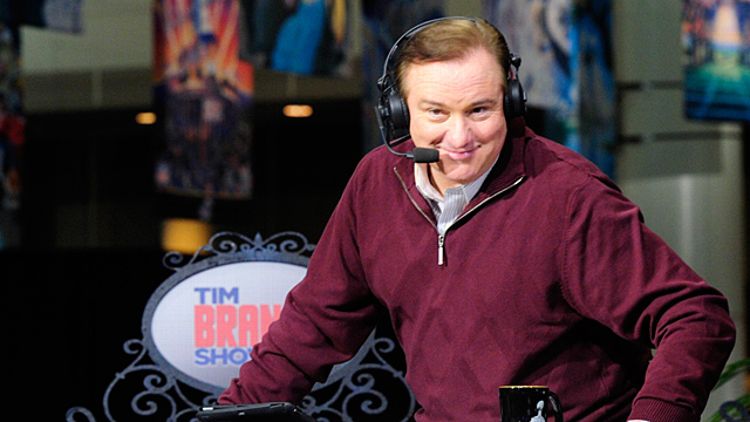 Most of the objections to Jason Collins’s announcement last week can be placed into neat categories. Religion. Politics. Francesa. But Tim Brando, the host of CBS’s College Football Today, the nerve center of SEC football, took to Twitter with an eye on leaving his competition in the dust:

I’m hearing Collins is a HERO because he made history! Okas a Sports Commentator if I make a SEX tape is that history?The word matters ok

The tweet confirmed my theory that the most important men in SEC history were Bear Bryant, Billy Cannon, and Sigmund Freud.

Some introductions are in order. Brando is 57 years old and a resident of Shreveport, Louisiana. On TV, talk radio, and Twitter, he doesn’t play a soothing, imperturbable studio host like James Brown or Curt Menefee. Brando is a brawler, an SEC tastemaker, and, occasionally, a producer of great howlers. One way to think about his Collins tweets (there were more) is that we non-SEC fans are eavesdropping on a conversation Brando has been having for years. That someone like Brando could become the SEC’s voice is a testament to both the rise of the conference and of a certain form of media culture.

Brando was born into the TV business. His father, Hub, was a musician who played with a band called the Dreamers and mesmerized Shreveport with his Hub Brando Variety Show. (Tim helped with drums and vocals.) At 14, Tim joined Hub in calling high school football on the radio in nearby Monroe. “I got a lump in my throat when I met the guys calling the games, not the players who were playing them,” Brando later told the Tulsa World. Brando convinced his parents to name his younger brother after the legendary announcer Curt Gowdy.

At first, Brando was a smooth, anodyne announcer — as likely to become the heir to Jim McKay as to Paul Finebaum. Hired by ESPN full-time in 1986, just after he’d turned 30, he hosted a college-football scoreboard show with Beano Cook and set a network record by announcing 25 different sports. In 1988, Brando landed a tryout to serve as the daytime host of Wheel of Fortune. (He asked a single-guy contestant if he was getting married anytime soon.) Brando later left ESPN for TBS, where he handled the Braves and Hawks.

Two earth-buckling changes set Brando on his current path. First, college football began to present a problem for the national networks. They couldn’t cover Alabama, Michigan, and USC with the same Olympian detachment that they used on NFL teams like the Patriots and Giants. Nonpartisanship sapped college football of what made it great — regional animosity — and, as the media splintered, it made the hosts seem inhuman. How could they maintain a healthy critical distance while the rest of us were fighting on a message board?

ESPN’s College GameDay addressed the issue by surrounding its set with students and their handmade signs. The Big Ten and Longhorn Networks, the latter an ESPN property, tried to narrowcast to specific yahoos. (ESPN’s SEC Network is coming next year.) CBS, which shares the rights to SEC football with ESPN, essentially became the house network of the South. On Saturdays, Brando is joined by Archie Manning and Tony Barnhart, an Atlanta Journal-Constitution reporter who calls himself Mr. College Football. (Spencer Tillman, an Oklahoma grad, represents the rest of the nation.) When Auburn plays Alabama, CBS is offering viewers an old-fashioned game of the week. It’s a collective regional experience like Hockey Night in Canada.

The second change that boosted Brando is that the SEC got really, really good. Back in 2002, Brando was moaning in his Sporting News column that the conference was 1-7 against BCS opponents. But thanks to Nick Saban and his lesser imitators, the SEC became — much to the chagrin of Texans like me — the story of college football. What would have been Southern homerism a decade ago is now the majority opinion, the correct take. Put another way, we live in era where Finebaum is profiled in The New Yorker.

Brando was the perfect man to seize on both trends. SiriusXM’s “Tim Brando Show” has become a roundtable for the Southern elite; in the last week, his guests included Gainesville, Florida–based journalist Pat Dooley, SEC commissioner Mike Slive, and Larry the Cable Guy. (There are national guests, too.) Brando’s show was where Louisville’s Kevin Ware was paid a tender tribute by … Mitch McConnell.

Within this comforting womb, Brando can be a wise observer of Southern sports, as when he writes about why SEC fans are so blasé about basketball. But mostly he has begun to sound like his callers. In 2010, after Alabama was upset by South Carolina, Brando did a guest spot on the “Paul Finebaum Radio Network.” A Bama fan called in to tell Brando his analysis was wrong. “Do you have any idea how dumb what you’re saying is?” Brando snapped. When the caller took the bait, Brando added, “Once again, further proof that Alabama fans are clueless.”

Last November, in another appearance on “Finebaum,” Brando said he “knew” Under Armour CEO Kevin Plank, who’s a Maryland grad, was paying the school’s exit fees from the ACC. This made for a great rant (“It’s just obscene what’s taking place here”) but as the Washington Post’s Dan Steinberg wrote, what Brando said wasn’t actually true.

Twitter has become the true medium for Brando’s id. Last season, Brando went on the radio and said that Urban Meyer, whose Ohio State team was on probation, was claiming he could win the Big Ten title. This was as factually iffy as the Under Armour claim. When Buckeyes fans asked for documentation, Brando denounced “fools on Twitter” and added, “You and all others asking for proof or a link get a LIFE!” Columbus Dispatch writer Tim May jumped online to say that Buckeyes fans were right, that Meyer had done no such angling. Brando wrote, “Gee Tim surprised you would play along. Pretty funny stuff. I stand by my opinion and Urban’s needs for a Div Title. Pathetic.”

In 2011, when Brando’s friend Houston Nutt was fired by Ole Miss, Brando noticed some schadenfreude wafting over from Arkansas, where Nutt used to coach. “The sad side of our culture shows up when people take joy out of someone else’s bad news,” he tweeted. “No tweets or interviews for me in Arkansas again.” Question: How would Brando stop his tweets at the Arkansas border?

Brando was no longer the guy who tried out for Wheel of Fortune. He had become a showman-provocateur — the host of the Tim Brando Variety Show. It was his impulse to needle, to blow his top, that got him into trouble with Jason Collins.

First, Brando argued that Collins’s coming-out wasn’t a big deal. “I really don’t care and frankly why should anyone else,” he tweeted. “The HERO worship is out of bounds. I’m glad he is happy.” As Slate’s Josh Levin wrote, Brando, Rush Limbaugh, and others used “I don’t care” as the chief form of Collins pushback. The line is problematic for many reasons, chiefly because Brando also didn’t care when the anti-gay atmosphere was so poisonous that athletes like Collins couldn’t consider coming out. As Levin noted, Brando is arguing for a new closet.

Brando’s second point was that fans were tossing around the word “hero” too loosely. I was interested to find a year-old article in the New Orleans Times-Picayune in which Brando said of Curt Gowdy, “He was my hero.” Brando also used the h-word about Darius Rucker, the Hootie & the Blowfish singer turned country star. About the only way “hero” could be further devalued is if Brando had laid it on Rascal Flatts.

Brando’s tweets soon escaped the SEC bubble. When pressed, Brando wrote his most revealing tweet: “Being [a] Christian White male over 50 that’s raised a family means nothing in today’s culture.” For a segment of Brando’s radio and TV audience, that declaration was as meaningful as Collins saying, “I’m black. And I’m gay.”

The irony is that Brando was the one claiming he didn’t care about labels. But now his own race, religion, and sexual orientation were worthy of victimhood. It was there that you began to realize the latter phase of Brando’s career is built on a kind of identity politics. He is a wily Southerner who battles all comers, who argues on behalf of a football conference and, as he sees it, a way of life. Tim Brando and Jason Collins have something in common after all. They are loud and proud.