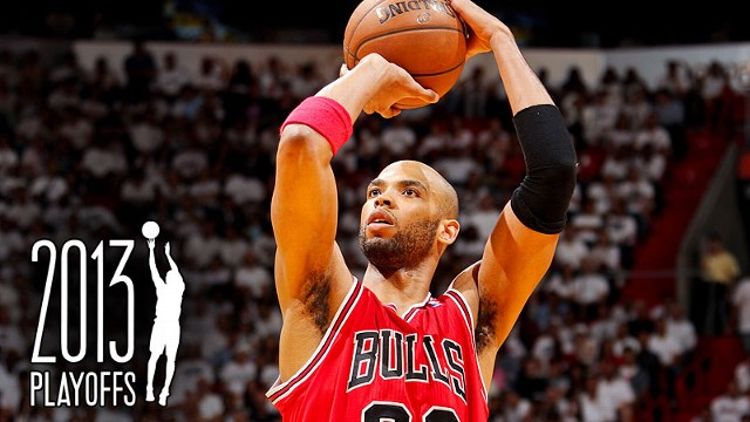 [Note: We’ll have to see what happens tonight, but considering Jimmy Butler’s Game 1 performance, the clearly cosmic elements in play with this Chicago team, and nearly every non-role-player Bull being in some state of disrepair, there’s a chance this series turns into “Who’s That Bull?” until they lose. I make no apologies.]

Who Is He? Taj Gibson.

Where Is He From? USC.

His Game in 25 Words or Fewer: One of the game’s truly elite defenders. Has athleticism to protect the rim and guard multiple positions. Excellent pick-and-roll stopper who’s comfortable switching onto guards.

Best Wikipedia Tidbit: I’d like to speak for all Bulls fans when I say that I’m not proud of the state of Taj Gibson’s Wikipedia page. Seriously, don’t even check. It’s embarrassing. A few suggested improvements, all of which are taken from a recent interview Gibson did with adrinkwith.com:

One quick aside: In this same interview, Gibson says that Barack Obama is “cool with Joakim.” Umm … what does that mean? Can you imagine Obama and this guy just chilling? Is it weird that I can?

Best YouTube Clip? Shocking as it might be, YouTube isn’t populated with a lot of proper-screen-hedging content, so illustrative examples of Taj’s game are limited. Good thing Taj has a long and storied history of soul-stealing drops of the hammer.

One more, from that same game:

Is He Saber-Friendly? Overall, yes. Taj has never been a skilled offensive player, and at age 27, there’s a good chance he never will be. A good portion of Gibson’s looks for the Bulls (71 of his 181 shots outside the restricted area) come from the baseline between eight and 16 feet, and it’s a shot he still hits at a very low rate (just under 31 percent). The result, when combined with mediocre free throw shooting, is a below-average True Shooting percentage of 51.2.

His main contribution to the Bulls’ offense is on the glass. The Bulls were the league’s fifth-best team in offensive rebound percentage (an estimate of the percentage of available offensive rebounds a team grabs), and they were a whole 3.5 percent better with Gibson on the floor. The 31.6 percent they grabbed with him on the floor would’ve been good for league best.

Defensively, the numbers over the last few seasons seem made up. The Bulls were the best defensive team in the league last season in points allowed per 100 possessions (95.3), and when Gibson was on the floor they were more than 11 points better in that same metric (99.8 to 88.6). The difference in Gibson’s on-off numbers this year isn’t nearly as drastic, but that’s due in large part to the loss of Omer Asik. In the nearly 750 minutes Asik and Gibson shared last season, that points allowed per 100 possessions figure dropped to 86.4.

Asik’s absence makes Gibson’s numbers this season even more impressive. No longer is the Bulls’ second unit a defensive gauntlet; Gibson’s time on the floor often coincided with Nate Robinson’s and Marco Belinelli’s, yet Chicago was still 4.3 points better per 100 possessions with him out there. When Gibson does get paired with another great frontcourt defender, the numbers are still staggering. The Gibson–Joakim Noah frontcourt gave up 91.8 points per 100 possessions in their 620 minutes together this season — more than eight points better than the starting combination of Noah and Carlos Boozer. I can keep going. Oh, you’re good? You sure? OK, cool.

Should We Know Him? The Bulls think so. This offseason, Gibson got a four-year, $38 million deal from Chicago, and I’m pretty sure the Bulls think they made out pretty well (especially because that same day, Toronto handed DeMar DeRozan $40 million). To avoid luxury-tax concerns (a debatable topic in its own right), the Bulls essentially had a choice between Omer Asik and Gibson. They chose Gibson. What that means long-term will be easier to understand when Chicago determines Carlos Boozer’s fate. Eight million dollars is a lot to pay a backup power forward — especially when that power forward is outplaying the guy who’s starting.

As for the rest of these playoffs, Gibson should factor into the Bulls’ plans as much as or more than Boozer. Gibson has the length and athleticism to help pack the paint and recover to Miami’s corner shooters when the Heat go small, and he’s shown an ability to make things tough on LeBron James or Dwyane Wade when switched onto either. Noah, Robinson, Jimmy Butler, and even Marco Belinelli have had louder impacts on the Bulls’ improbable run, but all Gibson has done is continue being the ideal version of what the Bulls want their players to be. He remains one of the most underrated players in all of basketball, but his value to Chicago — both financially and ideologically — has never been clearer.