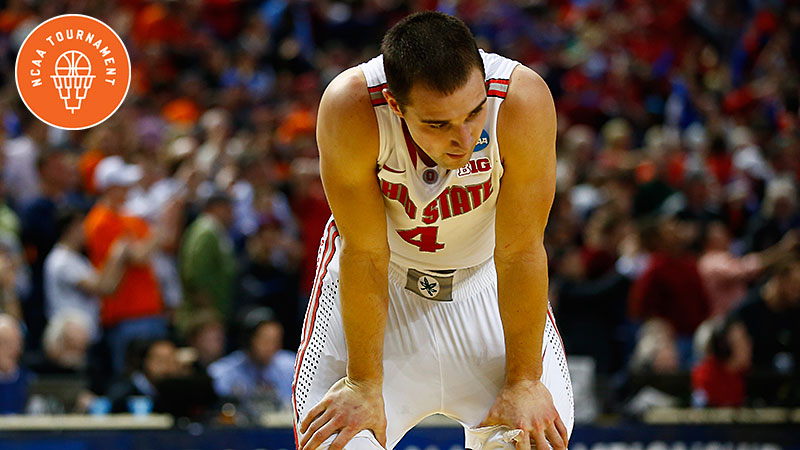 Let’s get this out of the way first: There’s absolutely no shame in losing to a team with a player named “Scoochie Smith.” None.

Contrary to popular belief, Aaron Craft does not owe you a billion dollars just because his team had the misfortune of losing to Dayton today. Moreover, you don’t deserve a billion dollars when you pin your hopes on the 136th most efficient offense in the country. But that’s beside the point, because AARON CRAFT IS ABOUT TO BE CRUSHED BY THIS BASKETBALL.

And here come the Photoshops. pic.twitter.com/PVVYHxb48R

It can’t be a coincidence that the moment Craft’s college career ended, his cheeks lost most of their trademark rosiness. Ohio State–Dayton was a pretty apt microcosm of the past four years. Craft followed up a productive first half with a scoring drought in the second, only to make a few clutch baskets as time wound down. He took more shots than he probably should have, but what are you gonna do when your roster’s utterly devoid of capable jump-shooters? And yeah, his five turnovers didn’t help matters, but all things considered there’s no way that’s even close to a one-point game without him. So it goes.

I watched the entire second half in an Ohio State classroom, and let me tell you: The atmosphere was surprisingly un-funeral-like. For Buckeyes fans, this wasn’t an unexpected death blow; it was more like putting your dog to sleep. Anyone who watched five seconds of this team knew it wasn’t Elite Eight–caliber; might as well put it out of its misery then, right? Our professor went to undergrad at Michigan and left a lot of easy jokes on the table. There wasn’t much to say. “When’s the spring game?” one girl asked.