A Brief Look at Notable Moments in NBA Free-Food History 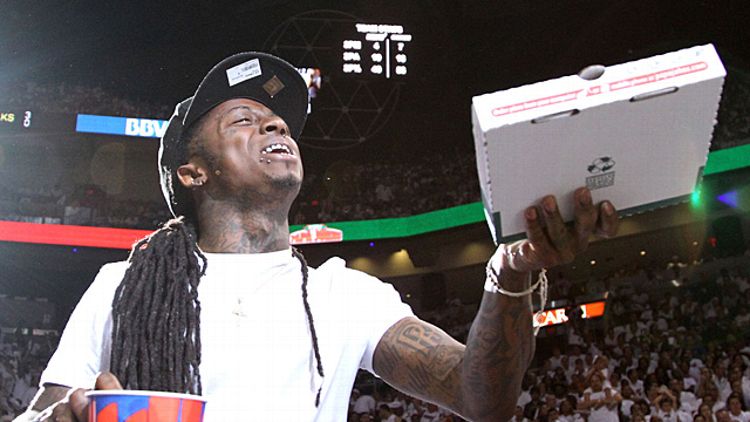 On Wednesday night, in a victory against the Magic, the Bulls’ Joakim Noah tried to feed the people. Up big with seconds left, he chucked up a 3 — just the fifth attempt of his career. If it had rattled in, the Bulls would have cracked 100 points and everyone at the United Center would have gotten a free Big Mac. Sadly, he missed. Even worse, he felt the need to apologize for it. “I regret it a little bit,” he’d say after the game. “It wasn’t a good shot … I just got caught up in the moment and I was trying to get the people a Big Mac. They really wanted a Big Mac [judging by how loud the crowd was getting] … we didn’t even get the Big Mac.” Jo, buddy — you have nothing to be sorry for. Of course they wanted a Big Mac. And of course you should have tried to give it to them. Next time, take 10 3s. Take a million 3s.

Raymond Felton is at the line, shooting two — two chances to tally 100 points, two chances to gift one randomly selected fan a Taco Bell and Trail Blazers gift pack, and to grace everyone in the building with free chalupas. (Don’t listen to Ernie Johnson’s commentary in the video. He didn’t know about the chalupas. Surely his tone would not have been so flippant if he had.) Felton clangs the first off the back of the rim. He lines up for the second — and clangs it off the exact same spot. Agony! I’d make a lighthearted comment here about the famously portly Raymond Felton possibly sabotaging the promotion so that he could keep all the chalupas for himself — but I’m too angry to jest. This whole disgraceful incident is like the universe’s exact polar opposite of Ollie’s clutch 2 for Hickory.

So Lakers fans only get Jack in the Box tacos if L.A. cracks 100 and holds its opponents to less than 100. And on December 1, 2009, the proud New Orleans Hornets did all they could to make sure that wouldn’t happen. As RealClearSports explains, “The Hornets knew what they were doing — especially Darren Collison, [who] attended UCLA so of course knows about free tacos. With 16 seconds left and the Hornets at 97 points they intentionally fouled in order to get another possession … there is no mistaking this was an attempt to spoil taco time.” Alas, it was not to be. Stuck at 99, New Orleans ceded the tacos. But it’s just like that tagline for that submarine show on ABC with Ben from Felicity says: honor in defiance.

After the game, in stereotypically mirthless fashion, Kobe (47 seconds in) attempts to quash all taco joy: “Maybe we should change it up. I’m tired of that damn taco chant.”

The Lakers are cruising to a Game 1 win in their 2009 series against the Jazz, and the chant comes out: “We want tacos.” And then Jeff Van Gundy gets his joyless Kobe Bryant on: “I think those promotions diminish the game. I really do. I don’t think there’s any need for people to be chanting that after a great performance like this — about tacos.” But what say you, Jeff, about Deron Williams’s persistence? He slashes, he dashes, he scoops in for a bucket — the Jazz hit 100 and, as Mike Breen eloquently puts it, “there go the tacos.” Often, working either toward or against a free taco, good players are spurred to reach toward, and to grasp, greatness.

Listen to this guy holding the camera: “Tacos! Yeaaaaah Tacoooos!!! Tacoooos!!! Awhooowhoohowhoooo!!!!” And then the confetti rains down. Why, Kobe and JVG? Why do you want to take this taco joy away?

Wizards at Bucks
January 19, 2011
A tough-fought victory gets punctuated, in reverse Raymond Felton style. Bucksketball reports: “The crowd went wild after two Larry Sanders free throws with :12 seconds remaining. There would be snack wraps.” And then: “‘No,’ Skiles said when asked after the game if he got the game he wanted from his team. ‘I don’t want to take anything away from them, but we can’t be satisfied.’” Of course not. Everyone knows that, while McDonald’s snack wraps are thoroughly delicious, they are also very tiny.

Luke Babbitt, late, from deep — swish. “And the crowd goes crazy … for chalupas.”

With time running out, the Raptors’ Ed Davis establishes position on the low block, barely — nay, fraughtly — fights off a double team, and just connects on an off-balance, one-handed turnaround J. Boom, 100 points, free Pizza Pizza pizza. Who cares that Toronto was down double digits at the time? Jeff’s equally joyless brother Stan, of course. “They’re going to cut the lead to 16 and the whole place went nuts like they won the championship,” Van Gundy said after the game. “I had no idea what was going on. Everybody is on their feet, standing ovation. Somebody in the crowd next to me said they were getting a free pizza. I guess that was pretty exciting.” I guess? I guess?!! Have you ever had Pizza Pizza pizza, Stan? Ontario’s no. 1 pizza? The pizza some have referred to as the very “embodiment of the Canadian dream”?

Also, and not to put too fine a point on it, but this is surprising because, like, Stan Van Gundy really doesn’t look like the kind of guy who would have a hard time understanding the wonder of free food.

Here we have an incident many historians have taken to categorizing as the Hindenburg disaster of NBA free-food promos. Here we have the Chalupa Caper.

With 3.3 seconds left, the Mavs’ Gary Trent sinks a jumper to give Dallas the hallowed 100 points needed to gift the crowd with 99-cent chalupas. (Note: not free chalupas. Just discounted chalupas.) Logically, the Cavs’ Wesley Person responds by knocking Gary to the floor, and a shoving match breaks out. Even more logically, Mark Cuban — defender of cheap-chalupa rights for all — runs onto the court to get in the mix.

Cuban would be fined $10,000 and suspended two games. He’d also come to bitterly regret the whole thing. According to then-Cavs coach Randy Wittman, who got an e-mail apology from Cuban: “He said if they could do it over they would have handled it differently.”

But not all would be so quick to put the Chalupa Caper behind them. After the game, Person would say, “Their coach called a play with 10 seconds left in a 20-point game. That’s disrespect … It’s bigger than chalupas.”

Mike D'Antoni May Be Second-Best, But He Can Lead the Lakers