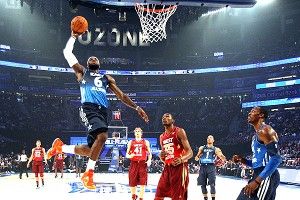 God bless Chuck, Kenny, Webber, Breen, Van Gundy, and everyone else. I think it might be time for a new voice in NBA announcing, and I think “Internet comedian” Anthony Richardson might be that man.

Richardson is known for a series of online videos called “playthroughs,” in which he sets up FIFA 12 to play out a match from the coming Premier League weekend while adding a combination of play-by-play, color commentary, free associative poetry, subliminal messaging, and utter nonsense. It’s awesome. Here’s one of his Premier League playthroughs, just to give you an idea:


Well, like all great artists, Richardson is branching out. He recently trained his virtual commentary eye on the American sports arena, offering up a playthrough of the NBA All-Star Game.

I would say Richardson’s grasp of basketball rules and regulations (and aesthetics) (and names) is … fleeting? But it really doesn’t matter. I mean, where else can you find observations like, “You’d have thought that they get it in every time, but that’s why basketball’s so exciting”? Or: “He completely took the ball out of the air like a swan!”

Can we just start saying “GOAL” whenever someone makes a shot in the NBA? Why not? Check out Anthony Richardson’s NBA All-Star Game playthrough below. Take that, capitalism.