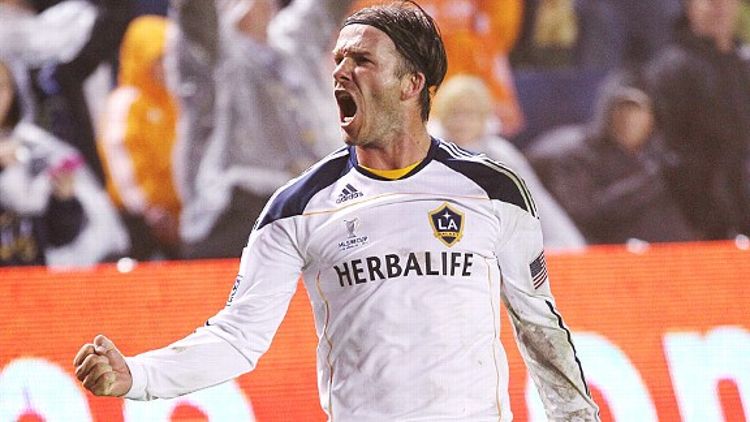 Were you too busy watching Vince Young win on Sunday night to catch MLS action? Yeah, us too. So we asked the Men in Blazers to take this one for us. In this cross-country e-mail exchange, Michael Davies and Roger Bennett walk you through last night’s 2011 MLS Cup.

Michael: OK, Rog it’s pissing down in L.A., and I’ve been to my local “international shoppe” to stock up on Boddingtons and wafers. I’m in the mood for this one — An MLS Cup 2011!!!!!! Beckham, Landycakes, Fat Robbie, Brian Ching and Alexi Lalas in the studio with Max Bretos! Remember him?! And already they both sound like lunatics …

Roger: I am not ashamed to admit it. I felt a real sense of giddy anticipation ahead of tonight’s game. A real sense of occasion. And not just because Ian Darke appeared to have blown out his hair for the Big One.

When the teams walked out, I was overwhelmed by a sense of progress that surrounds both soccer in this country and MLS. There is more football on television here than in England. A quarter of English Premier League teams are majority owned by Americans. Soccer-specific stadia have been developed by MLS, whose average attendance has outstripped both the NBA and the NHL this season — an astonishing achievement for a league that has steadfastly shunned the definite article. Look here, Davies, and tell me that this Smithsonian-worthy clip of MLS’ debut game does not make your throat enlumpen.

John Harkes was still a player. Sir Ian Darke was just a boxing commentator. And while Linda Cohn was still wholesomely comely, Everything Else Was Different. MLS was once a stumbling foal. Now it is confident enough to program itself directly against the American Music Awards. Tonight, MLS boldly poses the question, who do you want to watch, America? Nicki Minaj or Brian Ching?

Michael: Oh yes, I remember watching that on television, Rog. I still had hair. Reality TV hadn’t happened yet. And David Robert Joseph Beckham OBE was still on loan at Preston North End. Bizarrely, I am somewhat nostalgic for the old MLS. When Phil Anschutz owned every team in the league rather than just the two in the final. When the shirts were even more shocking than the one Brian Ching is wearing tonight. And when it didn’t used to rain so much in Southern California. By the way, it’s His Excellency Don Garber. And MLS Cup’s bigger problem tonight may be the Eagles at the Giants in helmet football on NBC.

Roger: Scratch that. MLS’ biggest problem was that the first 45 minutes were turgid. Like watching Real Madrid pummel Blackpool. Houston’s game plan was simple: 1. Curl into a ball. 2. Cover groin. 3. Scream “Not In The Face!” Not the storyline an MLS was looking for: “David Beckham has a cold.”

Tonight was meant to be Beckham’s ascension to America’s soccer throne. The culmination of a five-year MLS career that has followed a traditional three-act structure:

This game is meant to be the culmination of …

Michael: “Bad ball color, chunky turf, poor camera angle,” wrote one of our dozens of followers on Twitter, Rog. And those are the least of this game’s problems. Right now, side netting, late whistle, and tight call are the best players on the pitch by a mile. And then, even a lolloping David Beckham, chubster wubster Robbie, and a particularly Landycakeish Donovan are a mile better than everyone else. Houston is playing with all the desire and cutting edge of a cross between the Washington Generals and the zombie herd in The Walking Dead. The commissioner, His Excellency Don Garber, committed to seeing an MLS regarded as one of “best soccer leagues in the world” needs to find way to prevent American sports fans from actually seeing any other soccer leagues in the world.

Someone’s got to stick this quaffle in the net. Muggle-born, Ravenclaw House Captain David Beckham would be my, and Sir Ian Darke’s, sentimental choice.

Roger: His Excellency Don Garber is many things. For one, there is something about the way he sculpts his hair, which reminds me of Mike Rutherford, the technically adept guitarist from your favorite band, Genesis. Whenever I see him on television, “Silent Running” becomes vaguely audible. But Garber is also a student of the global game, and the Football Association I imagine he most admires right now is North Korea. A nation in which they edit the action of any game down so that highlights make it seem like their beloved-yet-hapless national team did not lose. No matter what the score. Which means that most games broadcast last approximately three minutes, consisting of the teams walking out, handshakes, coin toss, and final whistle.

What upsets me is a sense of “Anticappointment” about all of this. A bitter bile of missed opportunity fills my mouth. The late hour may mean the world is not watching. But I steadfastly believe better football than this exists in America just like intelligent life must exist on other planets still to be discovered. As I type, Landon Donovan has just bobbled home the opening goal. Thank you, Lord. He may have the hairline of the actor who played Brandon’s Dad in Beverly Hills 90210, but ensuring this game does not go to extra time is a humanitarian act of mercy.

Michael: My thoughts exactly, Rog. Also hoping for > 1 minute of stoppage. But how good was it to see Frankie Hejduk celebrating the goal? Really worried he wouldn’t make it back in time from the drum circle in Zuccotti Park. I have also enjoyed yelling “Tally Hall” at the top of my voice every time the Houston GK kicks the ball. Plus I have enjoyed the chunky turf. I love a bit of chunky turf, Rog. Reminds me of farm fields in Cornwall and forced family fun walks over the Whitsun holiday from school in the 1970s. I wonder what Beckham really makes of all this. In five years in an MLS, he has played about as many games as in a season and a half at Man United. He played way more games for Real Madrid, where he barely ever played. Despite the sniffles, I’m sure he mainly feels well-rested.

Roger: The final whistle has just blown. That game was as easy on the eye as a poke with a stick. The most symbolic moment was when the cameras cut to Houston’s injured MVP Brad Davis sitting on the bench, just in time to catch him in the midst of a full-mouthed yawn. Positives for an MLS? The best team won before a sell-out crowd and the season has borne moments of true quality.

The league should draw strength from its incremental progress. But for tonight, suffice it to say, my Man of the Match was the poetic Sir Ian Darke. One thought kept eating away at me all night long, though. What on earth was going on inside Jurgen Klinsmann’s mind as he watched this game? I imagined him scratching a note on his Moleskin Pad: “Start scouting the Pub Leagues of the Ruhr Valley Immediately.”